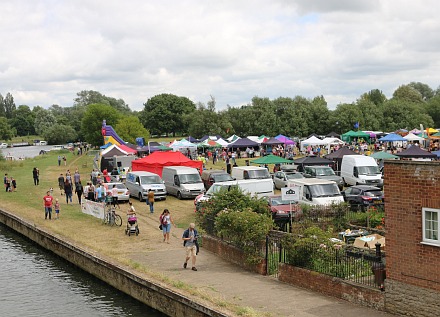 The fourth Abingdon food festival on Saturday the 24th June was the biggest yet. The first two took place at the Miele Experience Centre, and the second two at Rye Farm Meadow, beside Abingdon Bridge 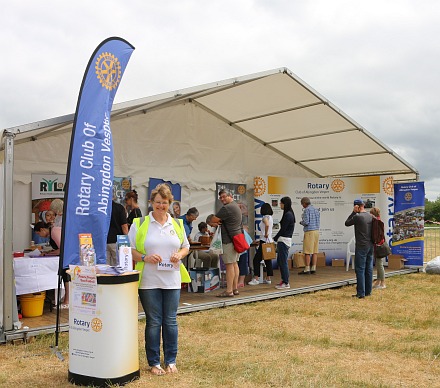 The event is organised by the Rotary Club of Abingdon Vesper. There was a small entrance fee of £3, and programs and raffle tickets also went towards helping raising funds towards their local and international projects – described at their stall and on their web site. Rotary members volunteer their time and skills towards the Rotary motto “Service Above Self”.  In their big tent cookery demonstrations were going on throughout the day. 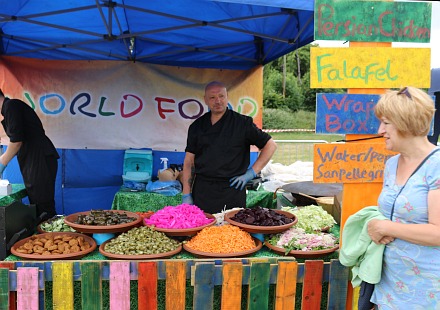 There were 60 or 70 exhibitors with food and drink on offer, quite a few of them local including from Abingdon: Ask, Dream Doors, Loose Cannon, Majliss, White Horse Leisure, and Wildwood Kitchen. There were lots of free samples to be tried before purchasing on many stalls, but Wildwood were giving away a selection of salads. 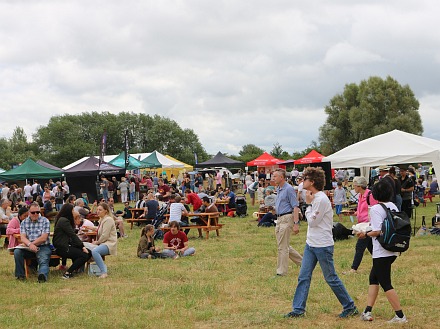 At the centre of the festival was an area with picnic tables where a number of groups played music. 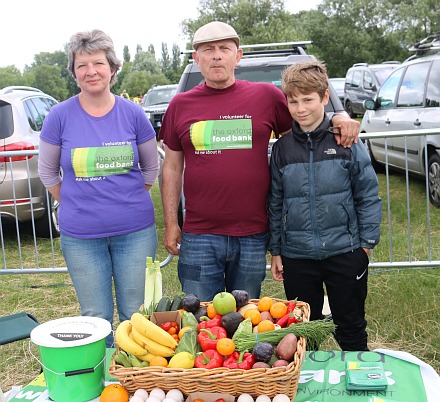 There were also a number of good causes with stalls including the Oxford Food Bank – pictured above. They collect fresh food from wholesalers and supermarkets that would otherwise be thrown away and deliver it to around 80 charities, including the Abingdon Food Bank, supplementing the tins and dry food they store at Christchurch on the Northcourt Road. 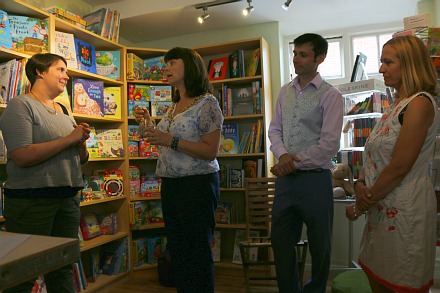 Mostly Books has already changed over to the new owner Sarah Dennis, and today there was a day of celebration in the shop with cake and champagne. At 1pm speeches were made by Mark Thornton, The Mayor of Abingdon, Jan Morter, and Sarah. 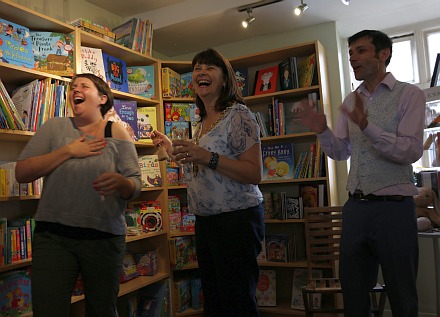 There followed a ceremony where a large key was passed from Mark and Nikki to Sarah via The Mayor, which contained some hilarity. Sarah has been in and around the shop for quite some time learning the art of running a book shop from Mark and Nikki. 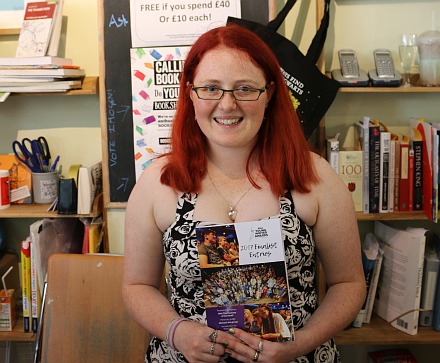 I also bought a marvelous book and was served by Imogen, and discovered that she is a finalist in the wicked young writers awards, and has her short story in the book of the finalists. So took a picture of that too.

The ‘Oxfordshire Book Crawl’ is happening over the next week, involving independent bookshops in Oxfordshire, to mark Independent Bookshop Week – you can find out more here: https://www.oxbookcrawl.co.uk/ 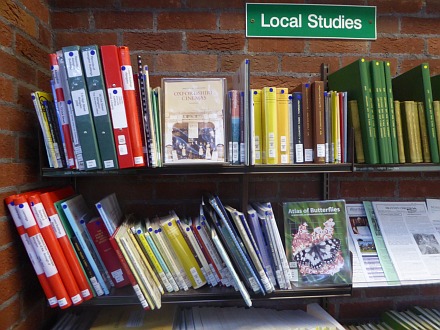 Michael Harrison has a Bibliography of Abingdon on the internet. It lists a huge number of books and articles about Abingdon. The list can be found at www.stertstream.net/bib2.htm. It contains the standard works on Abingdon that you might find in the local studies section at Abingon Library. It also contains many wonderful pieces you would be very lucky to find anywhere, such as ‘The claret ran out’ and ‘Dogs stolen. Stolen out of a yard belonging to Mr. Benjamin Tomkins, in the Ock-Street, in Abingdon Berks, on Friday night the 15th of this instant, two large pointing dogs, … Topper: … and … Pompey. Tomkins, B. (1768).’ 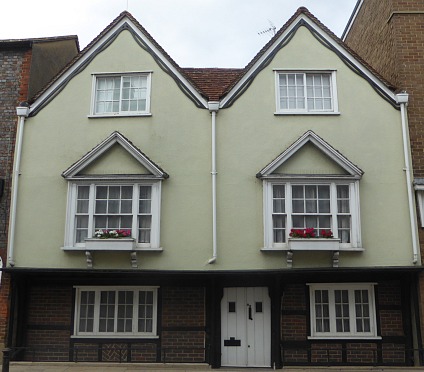 Michael also wrote a booklet to be found in the library that tells the history of his own house right back to the time of Abingdon Abbey. It is one of the oldest houses in Abingdon, and only just survived demolition on a couple of occasions. You can also read about the ups an downs of the house at www.stertstream.net/hist.htm

For many years Sandles was a private house, and Thrupp Lake formed part of the grounds – used for recreation and water sports. 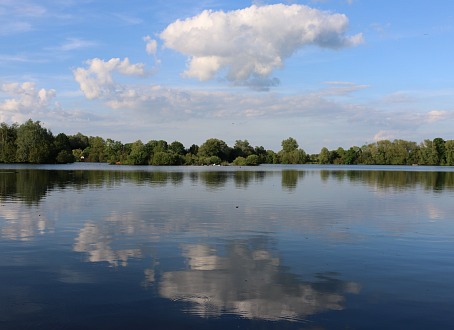 The lake and house were brought by nPower who applied for permission to fill Thrupp Lake with fly ash from Didcot Power Station. Locals then started up the Save Radley Lakes campaign.

In January 2007 Sandles was occupied by about 15 protesters, who stayed for about a month before being evicted, and then Sandles became a barracks for security men who patrolled the lake. A lot of trees were cut down at that time, preparing the lake for infilling. 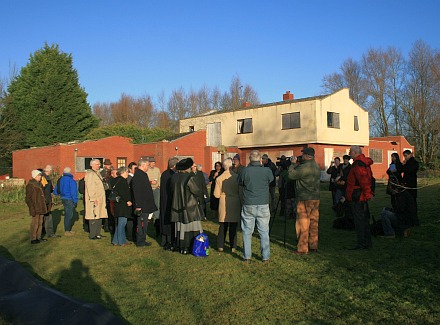 In December 2008, when this picture was taken, an agreement was reached between nPower and the Save Radley Lakes campaign that the Northmoor Trust would look after the lake as a nature reserve. Initial ideas were to improve access and viewing areas and possibly turn Sandles into an educational resource with outdoor learning space. 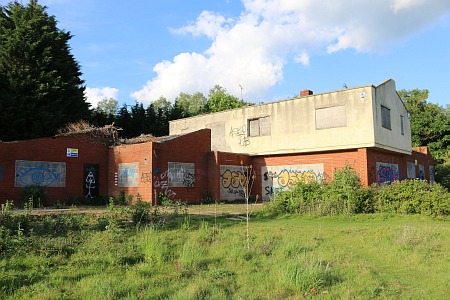 9 years have passed during which better access has been provided, and viewing places. The Northmoor Trust has become the Earth Trust; Save Radley Lakes has become the Friends of Radley Lakes. Meanwhile Sandles has been been left bricked up, and visited by every graffiti artist in the area, until now… 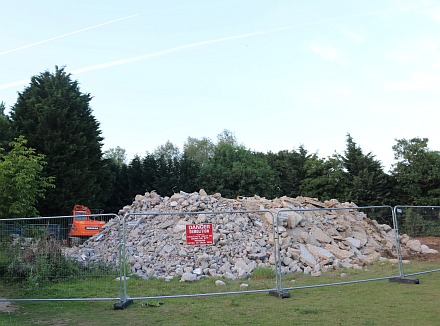 A week ago demolition began, and Sandles is now a pile of rubble.