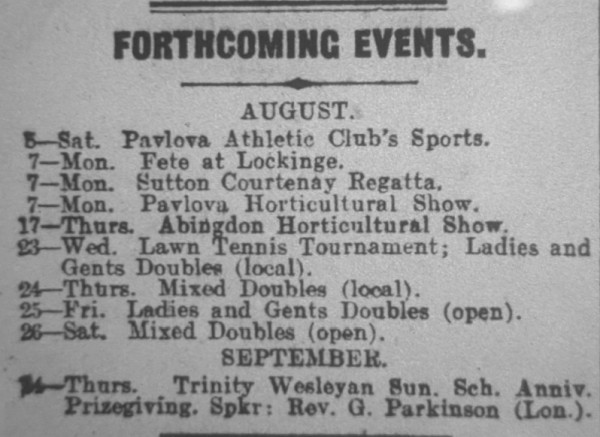 The Abingdon Cattle Market was somewhat thinly attended on Monday last, farmers being busy with the hay harvest. The following Monday is Bank Holiday and no market will be held.

The funeral of John Brown, an old Abingdon bellringer, took place in the Abingdon Cemetery on Wednesday afternoon. For 50 years, he was a ringer in St. Helen’s belfry, having retired about seven years ago. A muffled peal was rung at St. Helen’s on the evening of the funeral.

The death took place in the Abingdon Isolation Hospital last week of a prominent local footballer, in the person of S. J Didcock, of Clifton Hampden, at the early age of 37 years. For many years he played for Long Wittenham as an outside right and last season he played at right half.

The Mayor and Mayoress of Abingdon, last Thursday evening, at the Abingdon Council Chambers, held an official reception of the members of the Berks Archaeological Society. There were addresses on the history of the borough by Mr James Townsend, and the mace, and the borough plate by Revd P. H. Ditchfield. There was also a visit to the grounds of the late Bishop of Reading, in which extensive excavations are being carried out. For almost a hundred years, after the dissolution of the Abbey, the area had been used as a sort of stone quarry. So thoroughly had the foundations been removed, then nearly all that remained was ditches filled with rubble showing where once foundations had been. From the first spade, human remains were found in almost every place. In one place, massive stone foundations were found that at present remain unidentified with any particular part of the churches known to have occupied the site (Norman or Saxon). The results of the excavation so far attained were inconclusive but help to limit the area within which the Norman church, or Saxon churches, could have stood. 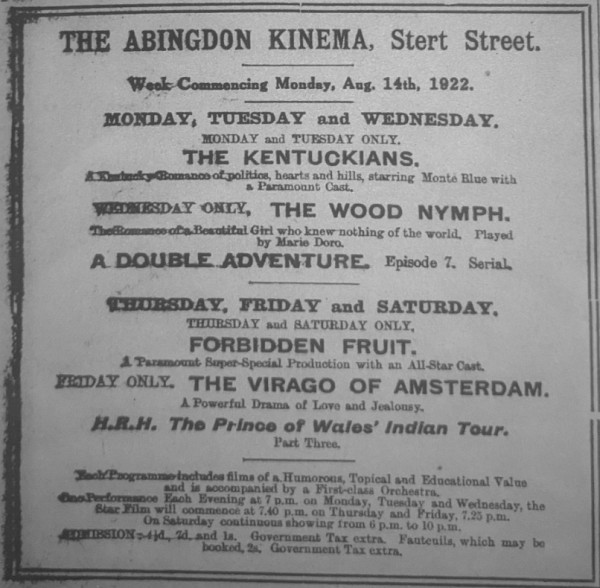 Through the generosity of Mr & Mrs T Tatham, some sixty-odd inmates of the Poor Law Institution (Workhouse) were entertained at Northcourt House on Tuesday. The older inmates were conveyed by Motor and, on arrival, found that games and entertainments had been arranged for them. Miss Stephens, who sang many old-fashioned English Songs, was especially popular. A willing band of lady helpers served tea, and prizes were awarded to the winners of the games. The old people returned to the institution after giving three hearty cheers to Mr & Mrs Tatham.

About 11pm on Thursday week, Mr R Legge, son of Alderman and Mrs Legge of Ock Street was riding a motorcycle from Milton to Abingdon immediately behind a Ford car driven by Mr F. Strappe of the Nags head when, near Drayton, Mr Trappe pulled up to attend to his headlights with the result that Mr Legge dashed into the rear of the car. He was found on the road bleeding from the face, whilst the front wheel of the motorcycle was badly damaged. Mr Legge was taken in the car to Dr Martin, who found he was suffering from severe cuts to the face and leg and slight concussion. He is now progressing favourably.

The question of finding work for the unemployed was considered by Abingdon Borough Council. At the sewage farm the surveyor reported he could find work for 25 men for about four weeks, and on the Ock ditch ten men for about a week. It was decided that the surveyor and the farm bailiff should superintend the working at the farm, which could start the following day.

Herald Editorial Opinion: There has been for some time, a good deal of public feeling with regard to the question of youngsters not being allowed to play games in the Park. As far as we can gather the position of the matter is that during the summer of 1921 the grass in the park, like that in many other playing fields, was seriously damaged by the drought and by the end of the year needed complete rest and sewing of grass. The question of providing playing grounds for children elsewhere in the town is an admiral and necessary project but will hardly affect the park. It has been found by experience in other towns that young children will not go very far to use a playground. So that one provided near Caldecott Road would not be likely to be much patronised by children from Spring Road. 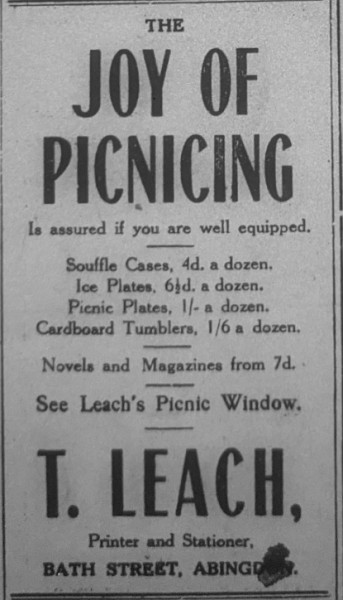 The members of the Abingdon Bowling Club were entertained on Thursday last week by the president, Alderman A, E. Preston, J.P., and Mrs Preston, at their residence, Whitefields, Albert Park, Abingdon, and a pleasant afternoon and evening were greatly appreciated. The health of the president and Mrs Preston was proposed and responded to.

The infants of the Church Sunday Schools, numbering about 150, held their summer treat on Wednesday afternoon last week in Radley Park. Tea was served to the youngsters in Radley School, and a delightful holiday resulted.

According to the Labour Exchange, returns vary very slightly from week to week. Last week there were registered 100 men as unemployed, and short-time workers numbered 91 men and 120 women.

The Rev H. H. Ashley, Minister of the Abingdon Trinity Wesleyan Church, preached his farewell sermons Sunday last when there were large congregations.

The successful competitor in the draw organised for the benefit of the Radcliffe Infirmary was Miss B. Garnett of Victoria Road, Abingdon. The prize was a Raleigh cycle.

At their meeting last week, the Abingdon Town Council complimented the Junior Sergeant of Mace (Mr G. Ashdown) on his courageous act of stopping a runaway horse.

At the County Bench on Monday, before Admiral W. R. Clutterbuck. J. F. Hobson. Mr M. T. Tatham, Mr E. H. Green and Mr F. G. Hallett. John Darling, a labourer of Radley, was charged on remand with stealing a Raleigh cycle and a number of eggs on July 27th, the property of Frank Paxton, poultry farmer of Kennington, Radley. The prosecutor stated that the prisoner had been employed temporarily for the last two months. On the 27th, the witness sent the prisoner to Oxford with ten dozen eggs in a basket and lent him the bicycle. As he did not return, the witness gave information to the police. Witness valued the property at £11. Joseph Woodley, of Fisher Row, Oxford, said he met the prisoner in St. Thomas’, Oxford, who asked him to buy the bicycle he was riding. Witness wanted one to ride to work and bought it for £4. The prisoner took off the carrier and said he wanted it, and that the bicycle belonged to his son. The carrier was left at the witness’s house, and as no one called for it, he became suspicious and informed the police. Henry Herbert, New Botley, stated that he met the prisoner in Bridge Street, Oxford on the 27th, who asked the witness to buy some eggs and he bought 80, for which he paid 10s. P.S. Goodenough, Abingdon, said he arrested the prisoner, who was concealed in his bedroom in Radley. The prisoner confessed to the theft and said he was sorry and could not make out why he did it. Fifteen previous convictions were produced, and the Bench was shown the prisoner’s Army character, which had the words “honest, industrious and sober,” written apparently by the prisoner himself, as it resembled the prisoner’s writing on the receipt he gave for the bicycle. The Bench sentenced him to six months hard labour. 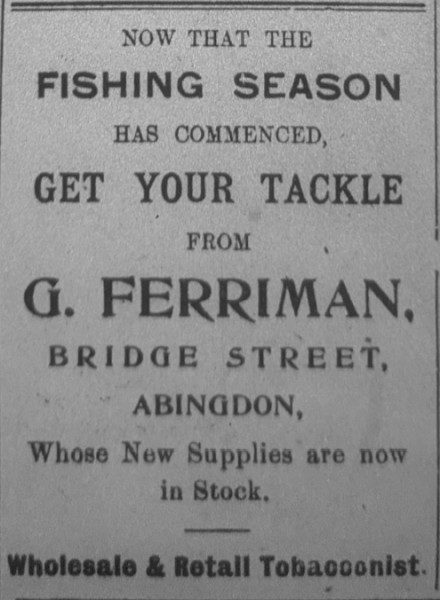 The only case at the Police-court on Tuesday was of William Dimmock, labourer, Ock Street, summoned for assaulting his wife, which was allowed to be withdrawn.

There was a large attendance at the Abingdon Flower Show, at Caldecott House Grounds, on Thursday last week. The weather, although wet in the early morning, was very fine, and the exhibits both of open and local classes were a record number. The City of Oxford Military Band was engaged, and there were other numerous attractions, which included Elementary School children’s sports, guessing, and bowling competitions, tug-of-war, etc. The admission prices were lower than in former years, and the gate money realised over £64. Mr B. J. Davey, the new secretary to the Abingdon Horticultural Society, deserves praise for his indefatigable exertions.

The Rev. H. H.. Ashby and Mrs Ashby, on their leaving Abingdon, were last week presented with a handbag, cloth, and engraved fountain pen by the Abingdon Wesleyan Church, and the Mother’s Meeting gave Mrs Ashby an excellent book. The presentations were made in the Schoolroom after a farewell service.

An interesting wedding took place at St. Michael’s Church, Abingdon, last week, when Mr T. H. Webber, secretary to the Abingdon Pavlova Athletic Club, was married to Miss Margaret Aldworth, of Abingdon. The captain of the Pavlova Football Club (Mr C. Johnson) was best man, and amongst the presents was a timepiece presented by the Athletic Club.

The return of unemployed issued by the local Labour Exchange last weekend was 113 men, 3 women, and 3 boys, the short-timers being the same number as the two previous weeks.

The Abingdon Territorials have been in camp for their annual training on Salisbury Plain. The local company have thoroughly enjoyed camp life this year, the food being plentiful and excellent.

Adverts and the editorial opinion about ‘The Park’ are brought to you with help from the Nork Berks Herald. 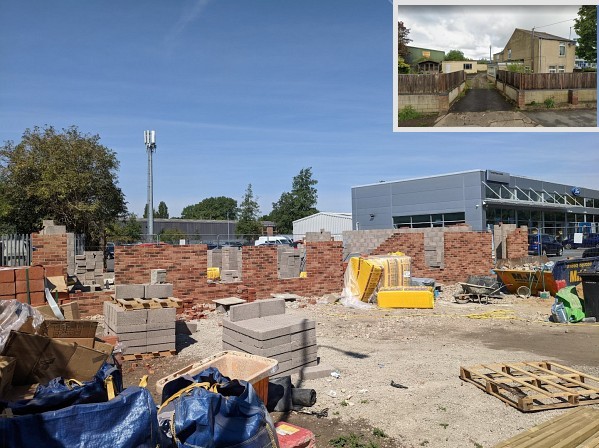 Ladygrove Cottage, next to Hartwells (car dealership), has been demolished and a 3-storey building is being built. It will contain four 1 bedroom and two 2 bedroom apartments and parking for 7 cars. 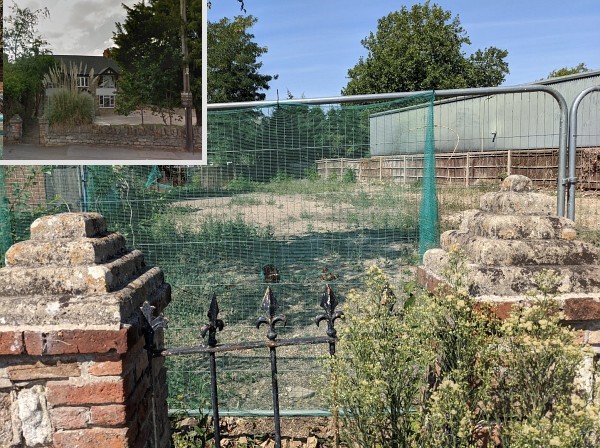 A few doors down, near the Caldecott Road roundabout, another house, the one that used to have two stone lions on the gateposts,  has been demolished. I have not seen plans for redevelopment yet. 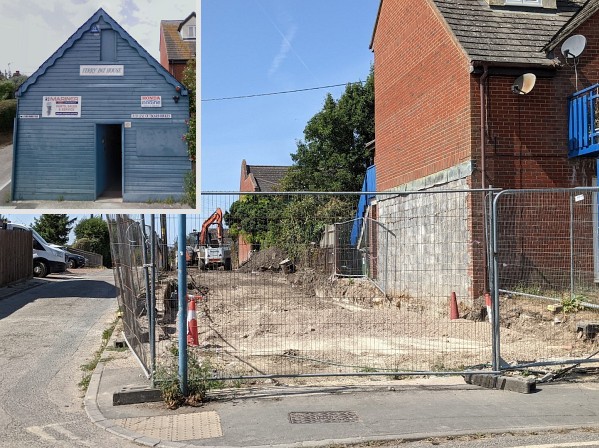 The Ferry Boat Yard, off the Wilsham Road, will now have 3 new residential units consisting of one 1 bed, one 2 bed and one 3 bed house and car parking. 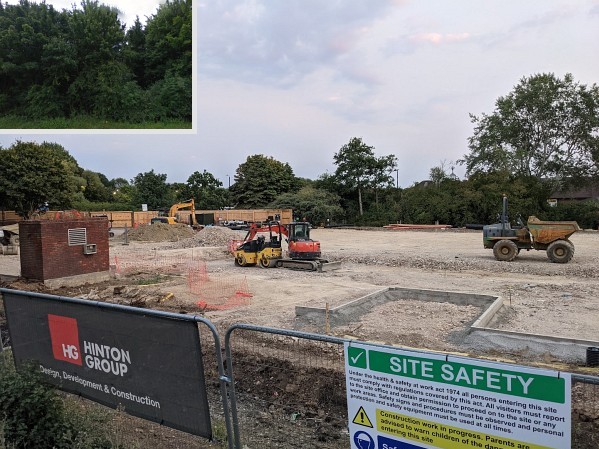 The Tesco Garden Centre will be a 86-bedroom hotel. It was not visible from Marcham Road but is now. 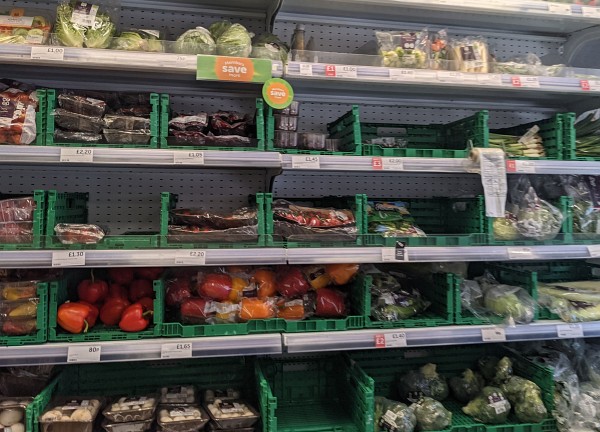 The change from street to shop is startling during this heatwave. You hear people saying on going into the Co-op,’I’ll spend the day here.’ 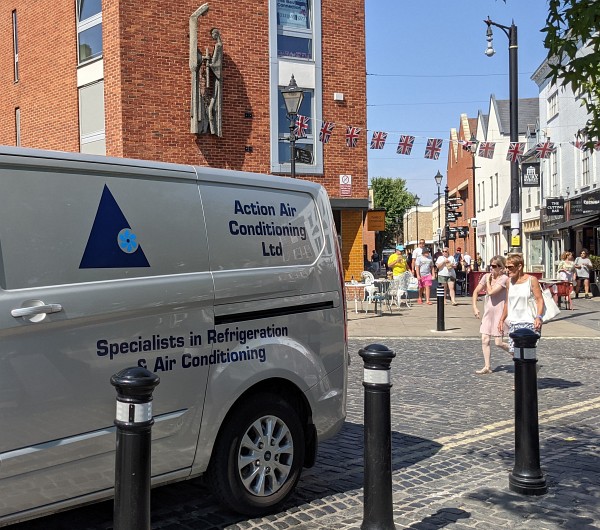 Refrigeration and air conditioning units must be using a lot of power. 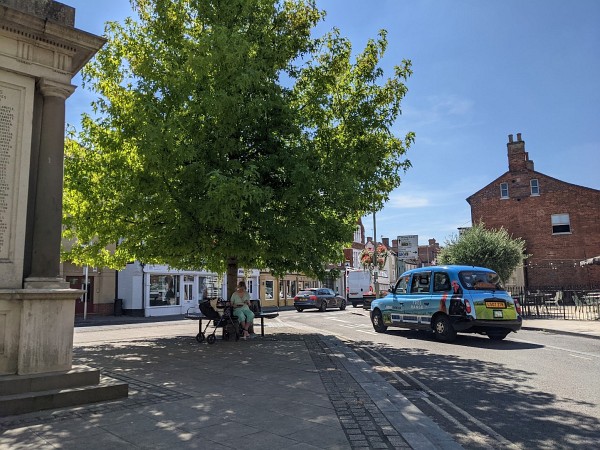 The trees at the Square and Market Place give shade. 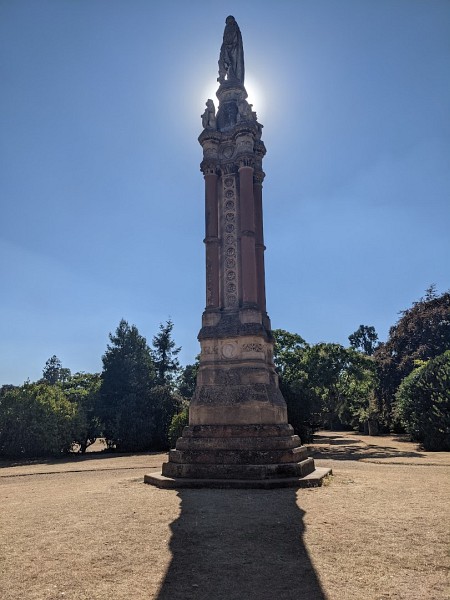 Other places are more exposed to the sun. 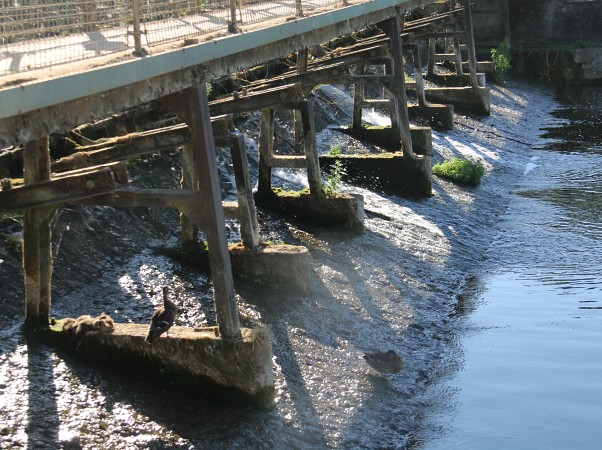 Newcomer reported that, on Thursday Morning, he saw a lot of water birds on the slope of Abingdon Weir at 9 am. They were enjoying the slow water flow and eating the water weed from the flow. He did not have his Apple phone with him. 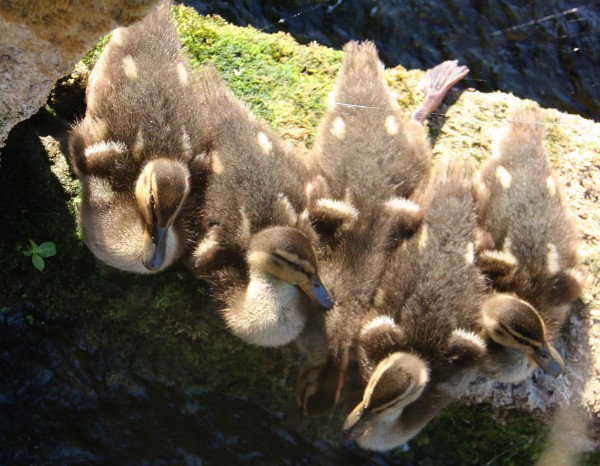 Hoping for a picture, I went there this morning. Instead of many birds, a family of ducks was resting on the weir substructure, 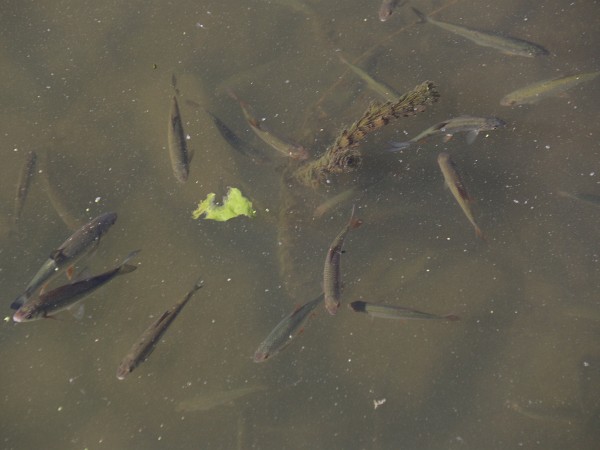 and thousands of small fish were nibbling at water weed near the surface just below the weir. 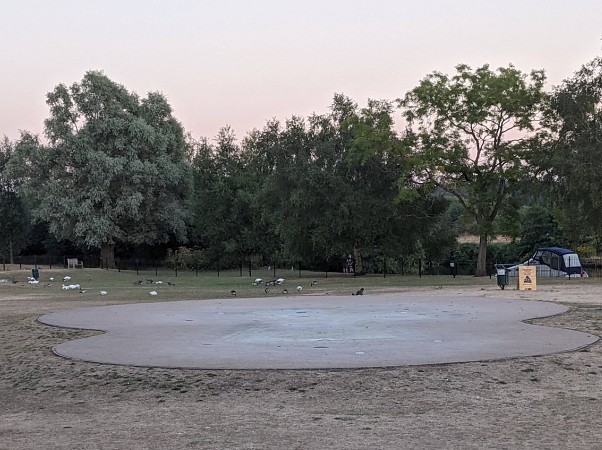 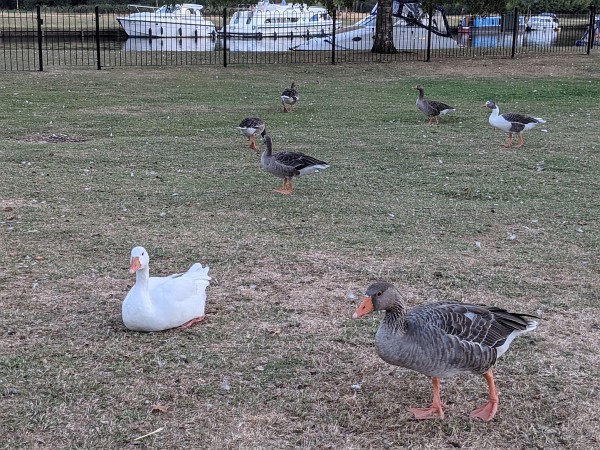 At Abbey Meadow, a new fence has been erected to stop young children from falling into the river. The fence could deter geese from entering the splash park, although they were still there today.