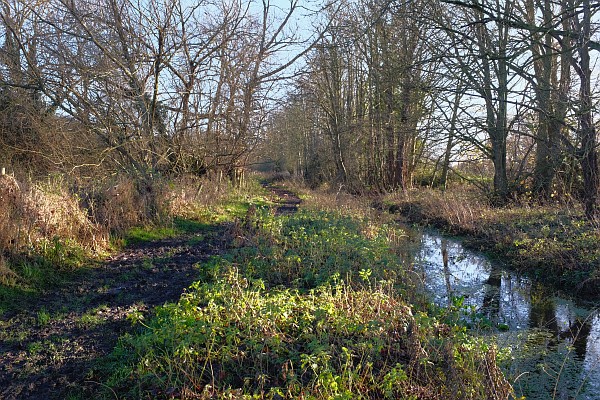 The Thames Path below Barton Fields is very muddy on this sunny December day. 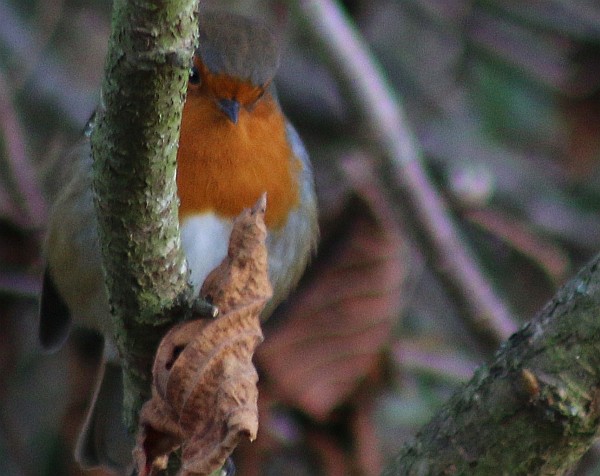 More birds are visible in the trees – now without foliage. They flit away as you approach and look shy. 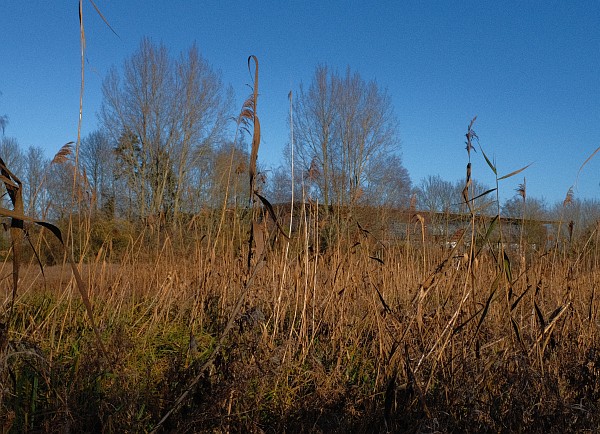 Looking up from the bottom of the field, across through the willow herb and bare trees, the office buildings along Barton Lane are visible. 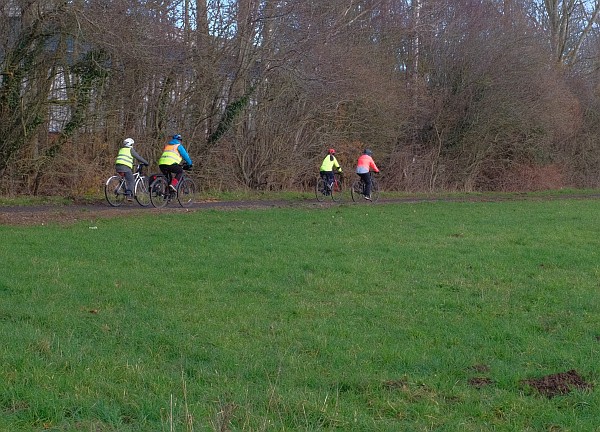 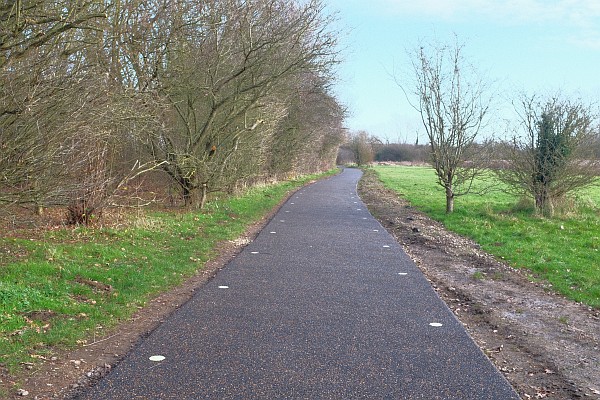 Similar surfaces have been introduced this year between Drayton and Abingdon.

Through Abingdon Town Centre cyclists are guided by a couple of signs back towards the cycle route, but nobody has solved how to get the cycle way through a town centre as a joined up cycle way 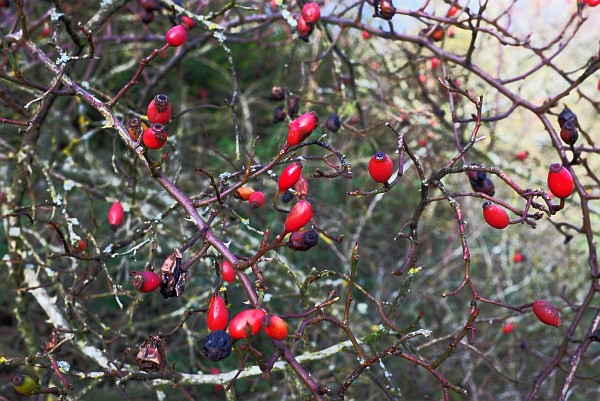 In December there are very few flowers. Berries are getting eaten or are drying out. 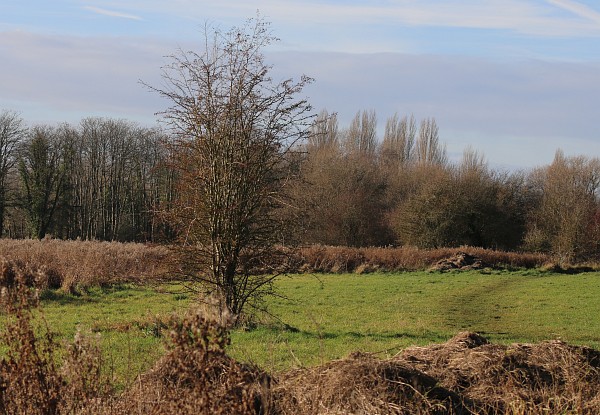 At the top end of Barton Fields – where wild flowers are such an feature in Spring and Summer, the grass is cut, the small trees are bare, and piles of hay provide a place for animals to remain warm during the winter. 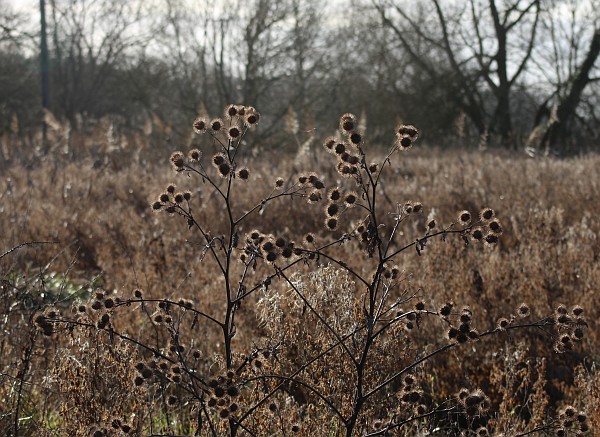 Brown has taken over from green as the main colour.

Thankyou to the Abingdon Naturalist Trust for the chance to enjoy the fields for a monthly exploration in 2020. Barton Fields provided a green space for people to walk and cycle during the lockdown. But at the same time more people have been walking over what is intended as a wildlife habitat. Mini thicket fence barriers have appeared at some junctions to keep people on the main paths.

I went for a walk and reached Thrupp Lake (one of the Radley Lakes) at about 3:30 pm. Going in by a gate next to the cycle track I found the path got very muddy at first. 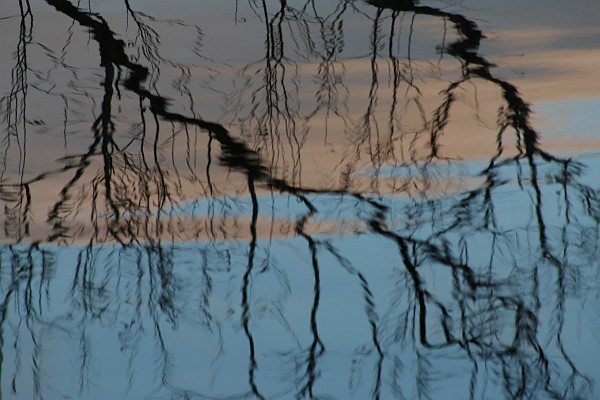 Instead of doing the usual full circuit I stayed on one bank and gazed across the water.

At first all the birds seemed a long way away. 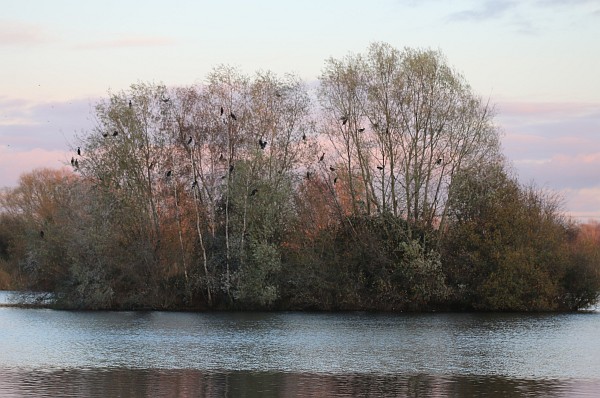 In the trees of the central islands some large birds (Cormorants?) were already roosting. 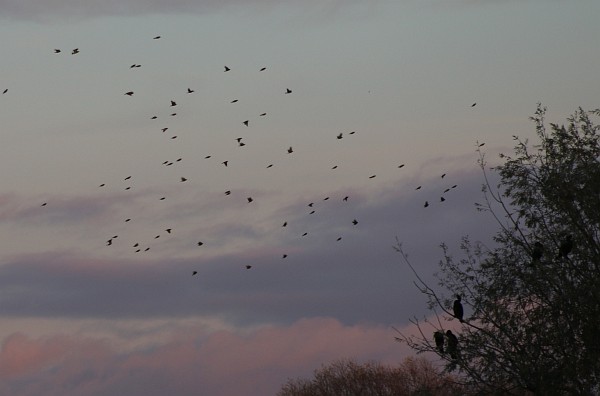 Flocks of smaller birds flew around, landing in the high branches above the large birds and then taking off again. 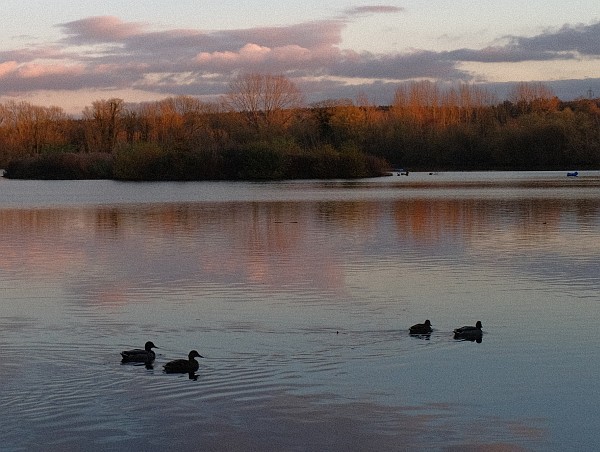 Nearer at hand, some ducks drifted by. 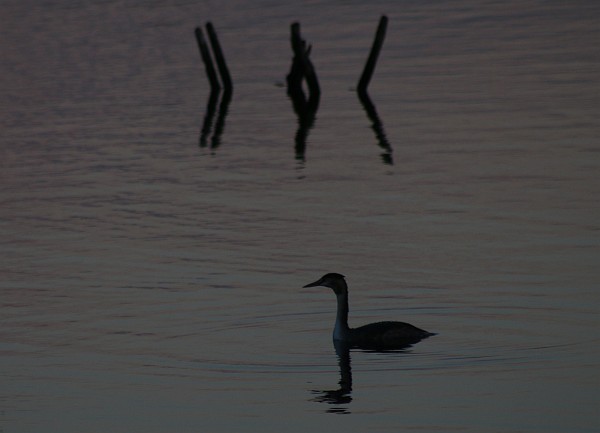 A Grebe kept diving and reappearing. There were also coots diving but they did not travel such long distances underwater. 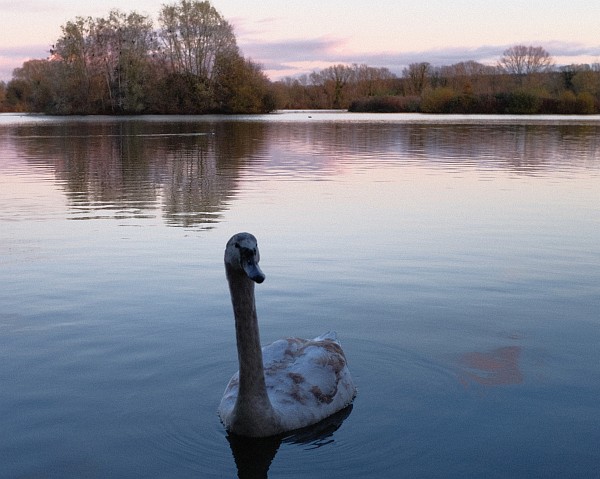 The sun set behind me and a young swan came up very close. It must be familiar with humans as a source of food and waited in front of me for a little while before drifting away. 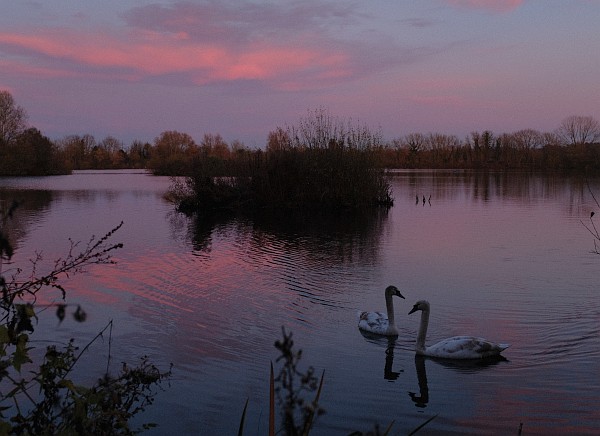 It went on to join another young swan dipping the lake for vegetation. 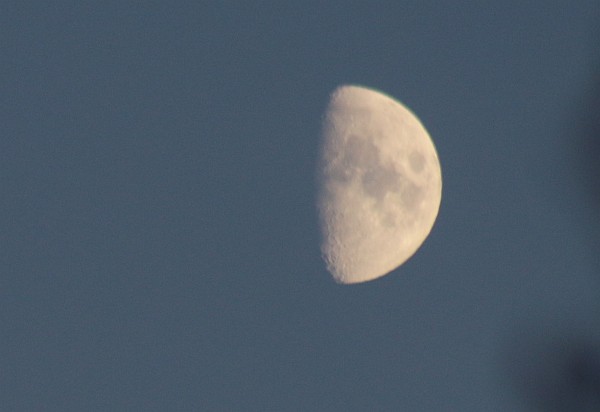 As the light faded, the moon became clearer. I retraced by steps back across the mud and back on the cycle path. 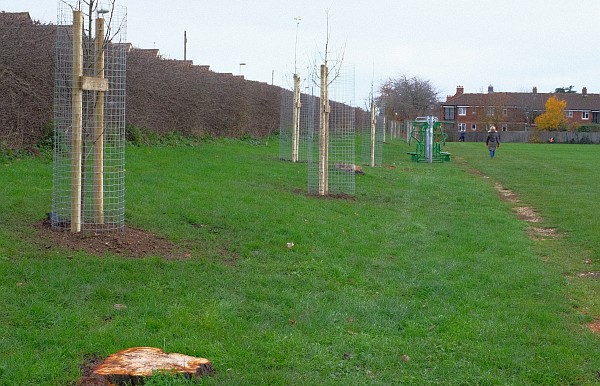 Twenty trees have been planted along one side of Boxhill recreation ground. These more than make up for the half dozen trees that were cut down a couple of weeks ago. 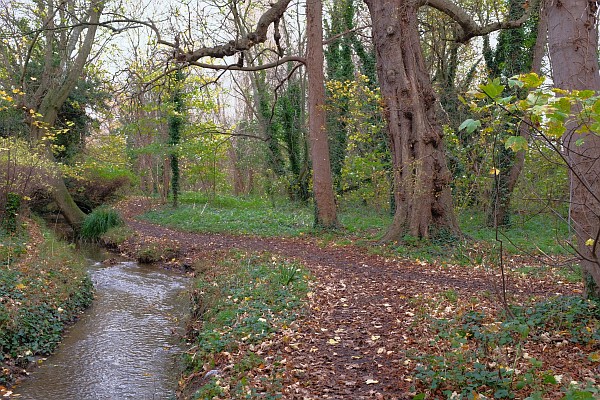 The other end of the recreation ground has some more established woodland alongside the banks of the River Stert.

At the end of October I walked round Barton Fields with David Guyoncourt from the Abingdon Naturalist Society and he told me about some of the work they are doing this autumn, and pointed out some plants. 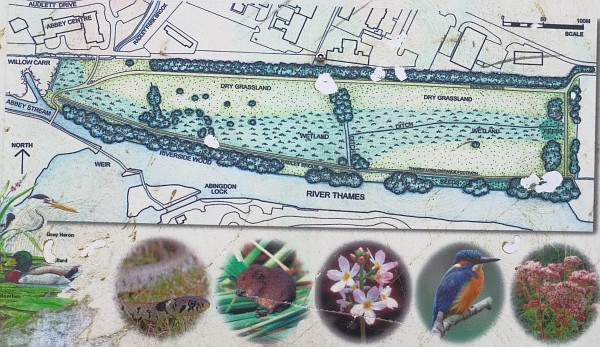 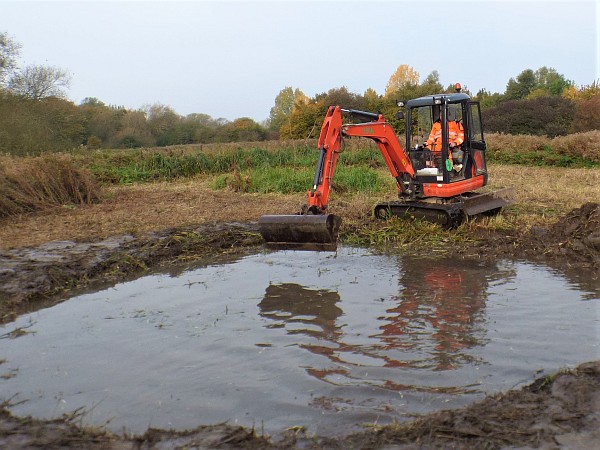 There were six ponds in the wetland area. Graham Bateman organised for two to be redug. He reported ‘On Monday morning (19 Oct), two of the Barton Fields ponds, which had become completely overgrown with vigorous Reed Sweet-grass (Glyceria maxima), were rejuvenated. We were ‘loaned’ a digger and driver by Fergal Construction Co Ltd, of Standlake, who have been working on the resurfacing of the Sustrans path running through Barton Fields. Ashley, the digger driver, was a delight to watch as he skilfully removed the top vegetation for stacking, then the roots and bottom mud that were delicately smoothed around the pond edges to allow any ‘creatures’ to return to water. We now have two ‘new’ ponds that would have been lost as manually they could never have been dug out.’ Graham says thankyou to Fergal and Ashley. 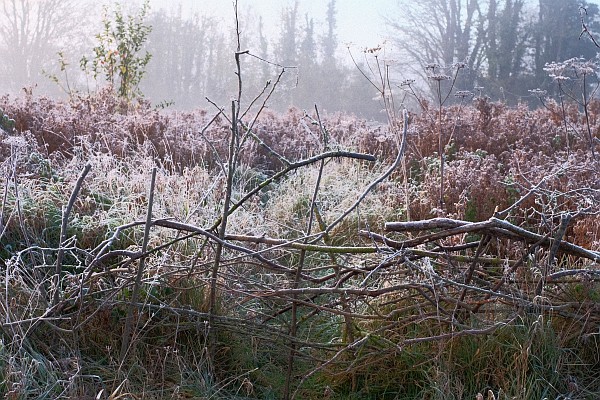 I returned this morning to see the progress of some other work. Whicker fences have been put up to try and protect some of the areas and so I only looked at them from a distance. 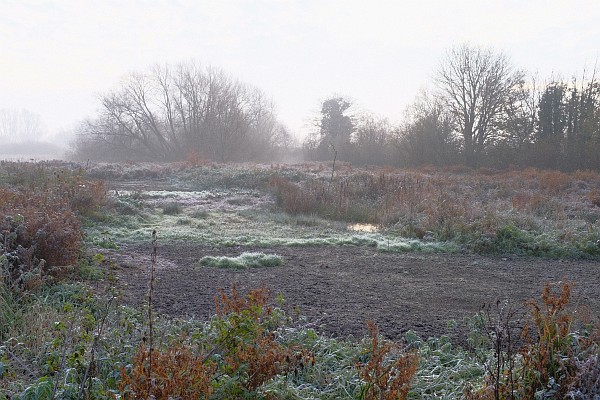 Near a pond that was originally made by the Freshwater Trust, Graham has also cleared a 300 sq m plot in the marshy, peaty area during Lock-down in which they have introduced 1000 Snake’s-head Fritillary bulbs and will be introducing other plants next year. This wetland meadow will be mowed each summer. This area also has Snipe. 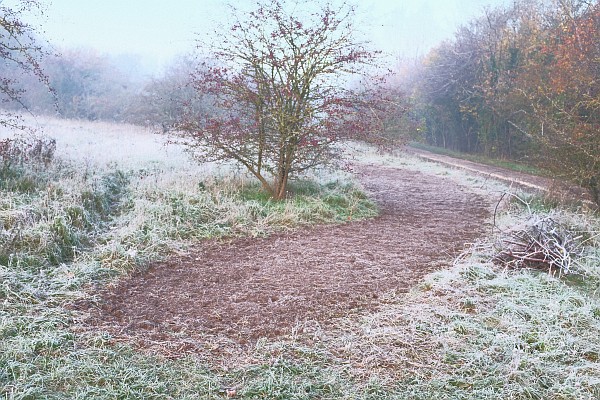 In October, David showed me some of the remaining Cornfield Annuals in the Cornfield Annual Patch: Corn Marigold (yellow), Corncockle (pink flower, poisonous seeds), Corn Chamomile (white daisy flower), Cornflower (blue). This patch has since been rotovated for next year. 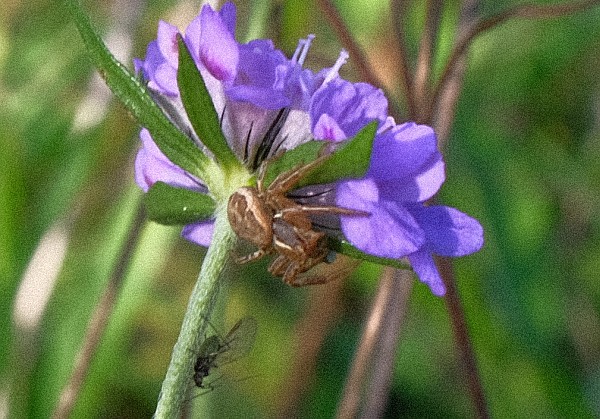 Returning in November I did not see as many flowers but did see this Small Scabious with a spider and a fly. 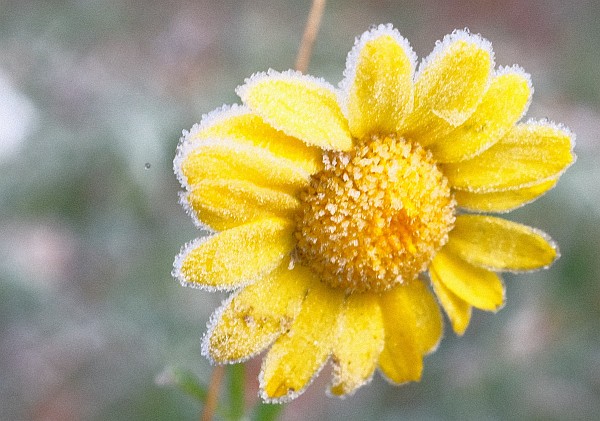 There was also this Corn Marigold. 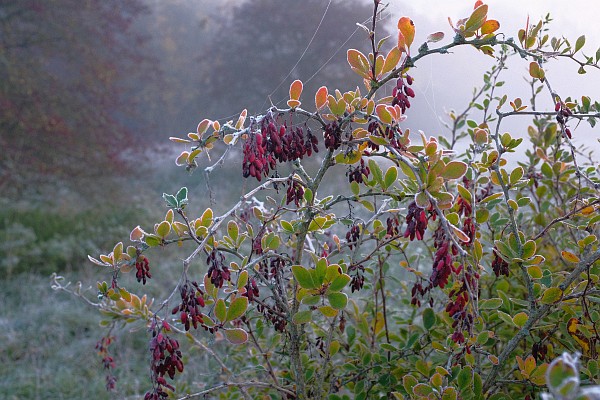 Among the bushes with berries are Barberry (or Berberis). This small bush has elongated red berries, and is said to harbour Ergot which can harm corn crops so is not popular with farmers. David said they planted it as a foodplant of the Barberry Carpet Moth (which they do not have yet). 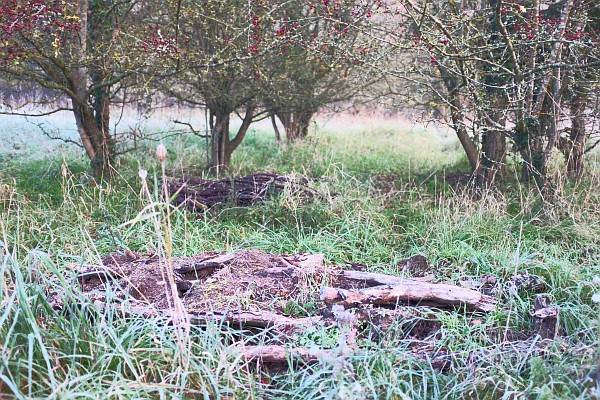 Regarding reptiles, Grass Snakes are common throughout the site and lay their eggs in the compost heaps. David frequently sees young ones. Last year they introduced 10 Slow Worms, five of which we have seen again this year. They have also seen a baby this year. Another 6 adults were donated and released this year.  He also showed me the pits they have dug and covered with wood and soil as refuges for slow worms. Apparently last year the police were called to one of these in the copse because somebody reported a possible grave! 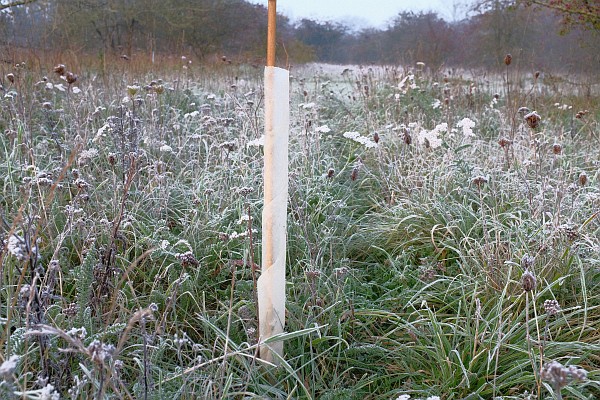 The Abingdon Naturalist’s are also introducing a shrub called Purging Buckthorne – the foodplant of the Brimstone butterfly. 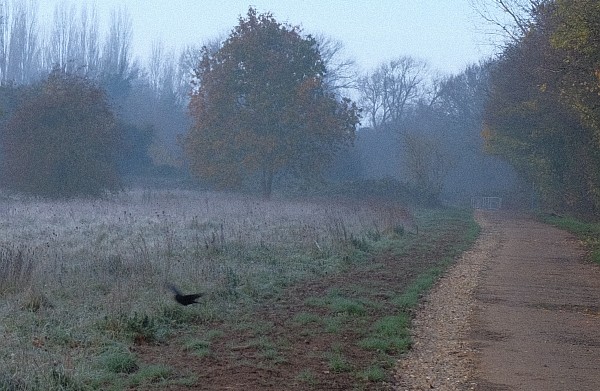 The work on the cycleway continues, and the contractors will be sowing wildflowers along the dug over margins beside the path.

Thankyou to David for the tour. Here are the links to the Abingdon Naturalists Group
http://www.abnats.org.uk/home.html
https://www.facebook.com/groups/abingdonnats