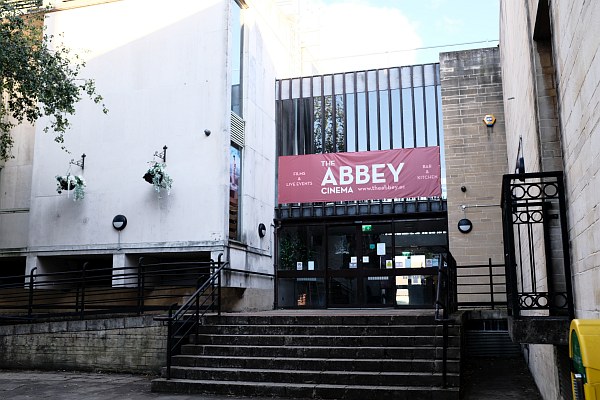 During the lockdown, the Abbey Cinema have been encouraging people to become members and get special deals as well as ensuring a steady cash flow and the survival of the cinema. Their first event will be the Formula 1 race from Silverstone, and is a members only event. 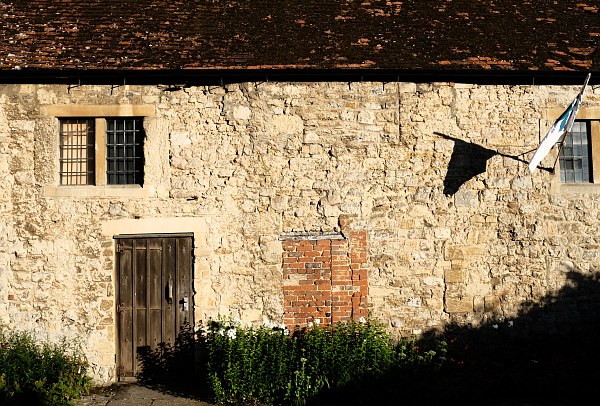 The Unicorn Theater has no What’s On yet. They have a holding webpage saying ‘New Site Coming Soon’. 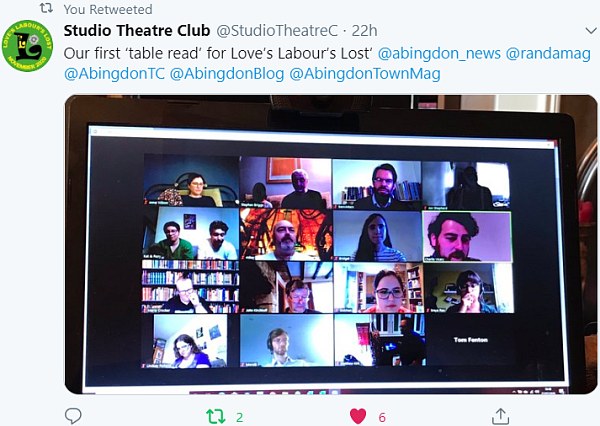 The Studio Theatre Club announced they have started a read through of Love’s Labour’s Lost, to be performed at the Unicorn Theatre in November, if all’s well that ends well.

The Amey Theatre booking office still only has cancelled events at the moment.

Some leisure and fitness centres have reopened this week in Abingdon. I can see people back on the gym machines at Results and the White Horse Leisure and Tennis Centre have: gym, swimming (not splash pool), fitness classes, indoor and outdoor tennis only. The open air pool will not open this season.

Regarding churches, I hear that St Edmunds and Our Lady have a booking system for Masses and up to 30 people can attend. I have not heard about any other church meeting physically yet. The congregation size will be limited to 30 in most churches, and so streaming or service sheets will continue for those who cannot attend. 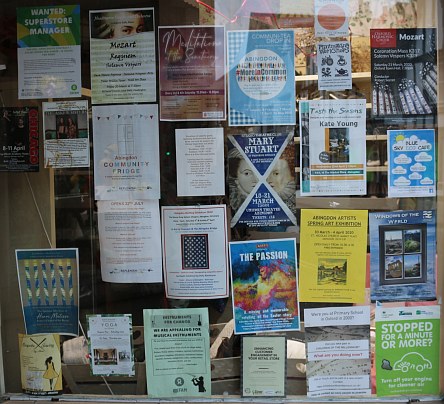 The posters in the window of Oxfam, Abingdon are like a time capsule on what was just about to happen before we went into Coronavirus lockdown and all public events stopped. 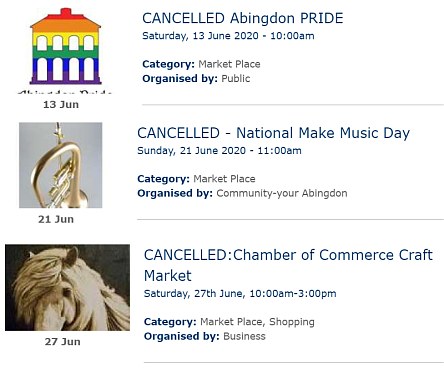 The What’s On section on the Town Council site has a cascade of cancelled events. 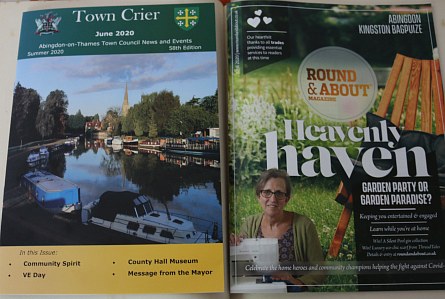 Two days ago the June 2020 Town Crier, published by Abingdon-on-Thames Town Council, and Round & About Magazine dropped through the front door together.

Round & About had no Idle Ramblings about forthcoming community events, and the Town Crier had no What’s On.

We could do with a What’s Streaming in Abingdon to find – in one place – the streamed concerts and church services, virtual jumble sales, Zoom fitness classes and Instagram art exhibitions. 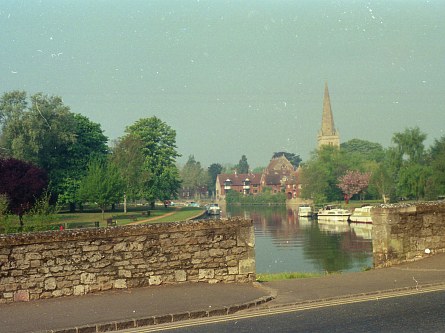 Here are a few pictures of the 50th anniversary of VE Day in Abingdon.

My diary says … “May 8th 1995 – As Bank Holidays go this was a good one. In the Market Square we joined the crowds to catch buns thrown, from the museum roof, by the Mayor and other Town Council Dignitaries . From where I was, the sun in my eyes, I saw buns like black disks shooting off in all trajectories, often coming in bursts. One landed on my head and got trodden on. Another came with a plop into my hands. It had a V for Victory on top. The ladies next to me got a VE bun. They said they varnish the buns and keep them. While we were talking another bun hit me on the head and bounced off behind. Somebody behind shouted ‘Well Caught!’ Alex (our son) got very competitive and got into a tug of war for one bun. We did not see any of the prize M or AM buns from the Morlands Brewery…” 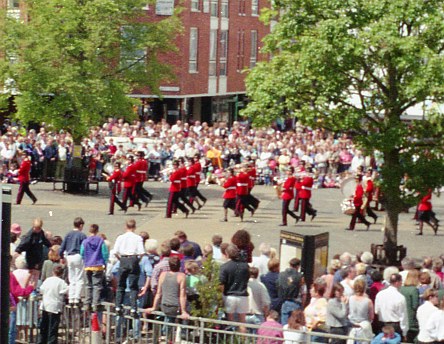 Before the bun throw we watched bands on the Market Place’ 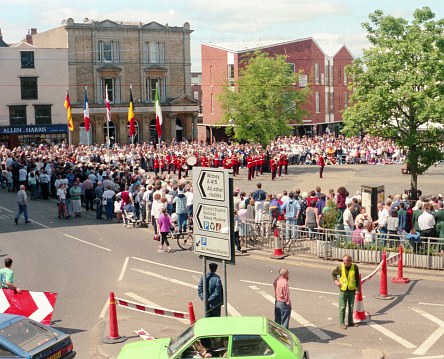 There were national flags of the twin towns. 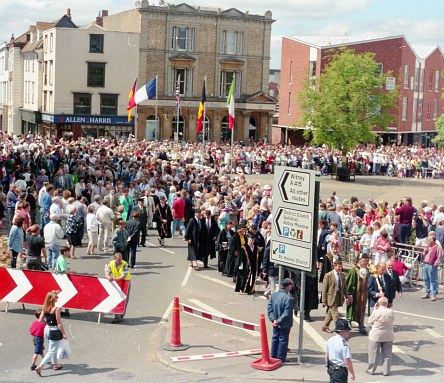 The town council walked back afterwards. 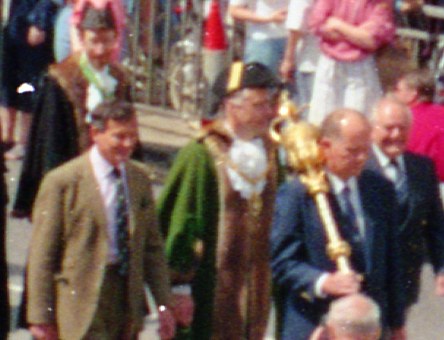 The Mayor could be Dr Colin Kemp, and behind him is Dr Jim Halliday, the Deputy Mayor. 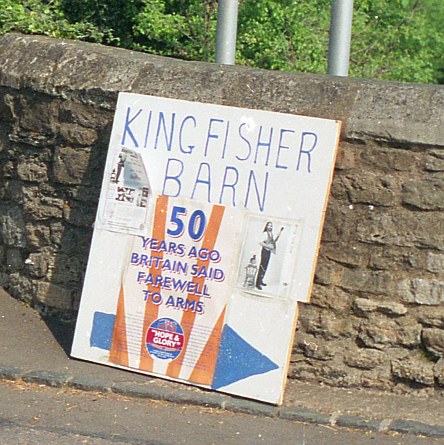 There was also an event at the Kingfisher Barn called ‘50 Years Ago Britain said farewell to arms’.

In the evening my diary says “We went to watch the bonfire in Rye Farm Meadow from across the River. The huge tongues of flame, reflected in the Thames, made the river look on fire. We then went home and watched a very good Dad’s Army – the one where Corporal Jones got married; and watched national beacons being lit round the country and the Queen and Vera Lynn. Jessica (our daughter) asked amazed ‘Is that our Queen?’ The Queen wore a blue outfit and a spangly broach.’

VE Day 75 in Abingdon will be quite different as we are in lockdown to stop the spread of the Covid-19 pandemic. Abingdon-on-Thames have a page on VE Day 75 Abingdon virtual celebrations.

My mum who is staying inside during the lockdown remembers VE Day with a little sadness. She belonged to the Exclusive Brethren, and that meant she was not allowed to mix socially with others not in the group. She remembers watching all her neighbours celebrating in a field and not being allowed to join in. 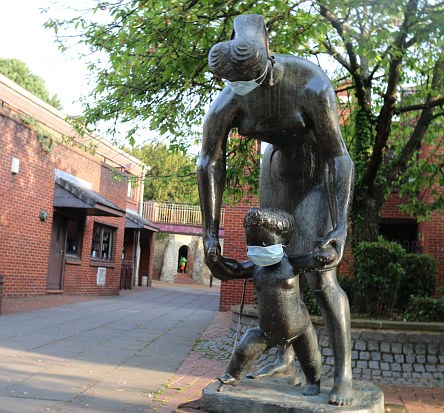 Some trend setters in Abingdon have started to wear masks in public – a practice long established in Asia. I read somewhere that it was begun in Japan in 1918 during the influenza pandemic. 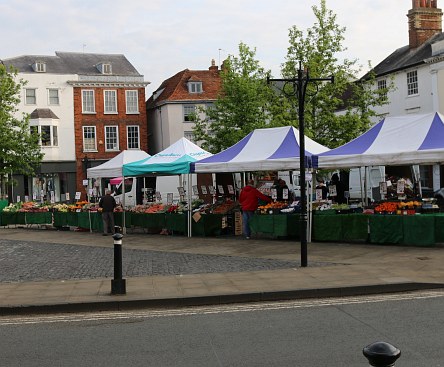 At the Abingdon Market the fruit and veg stall was extended into one long stall. This is to help social distancing. 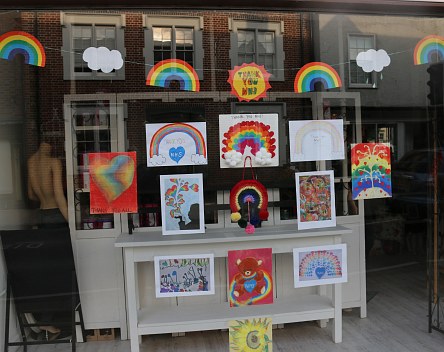 Finishing Touch in Stert Street have been making some colourful rainbows to add to their shop window while the shop is closed. 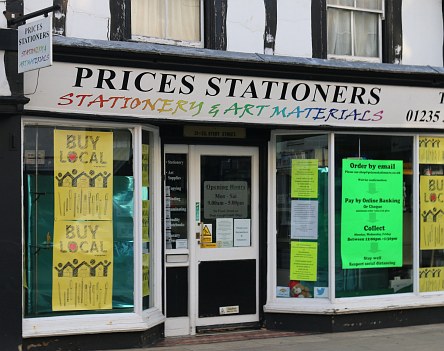 Prices Stationers will take orders by email. They supply the raw materials for making all kinds of Art, including rainbows for the window, and VE Day bunting. 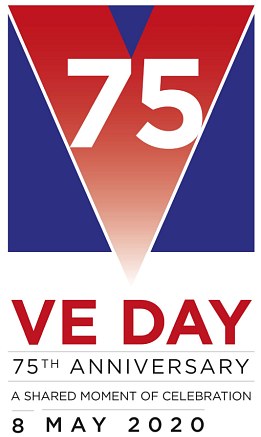 VE Day 75 is still planned for Friday 8th May. Many events will have been cancelled because of the lockdown but Abingdon-on-Thames Town Council have details of their plans for virtual events. 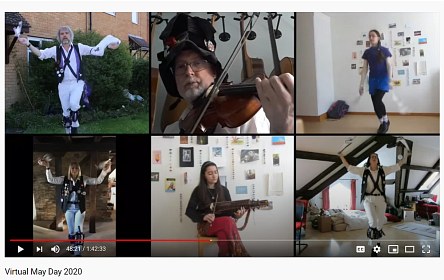 I went for a walk this May Morning in Abingdon after watching the Virtual May Day Morning from Oxford. It contained a fascinating history of May Day celebrations put together by one of the Oxford Waites. 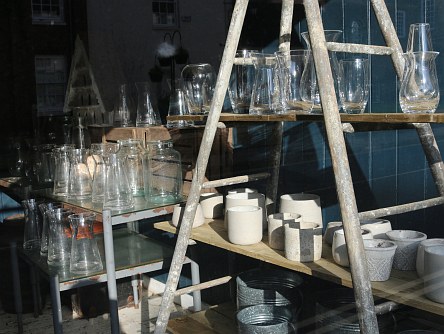 Fabulous Flowers’ flower containers shone in the early morning sun. For any in the florist trade it must be a nightmare trying to guess what will happen in the weeks and months ahead. 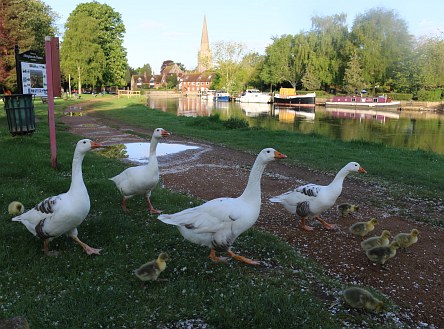 On the far side of The River Thames some adult geese were shepherding their young. 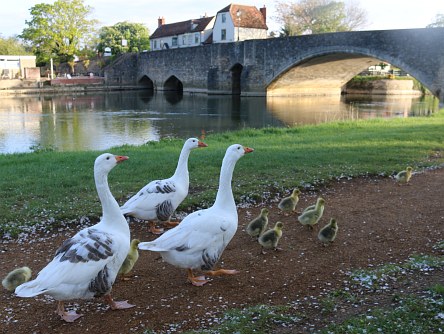 They were a little wary but not aggressive. The fabulous views of Abingdon can be seen beyond them. 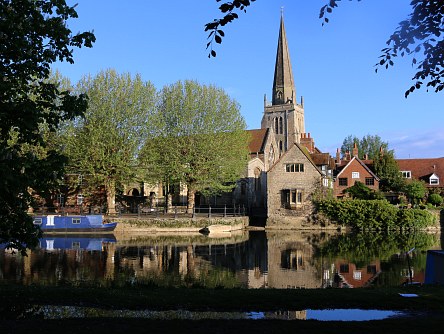 There are many good viewing points for seeing St Helen’s Church around Abingdon and beyond. 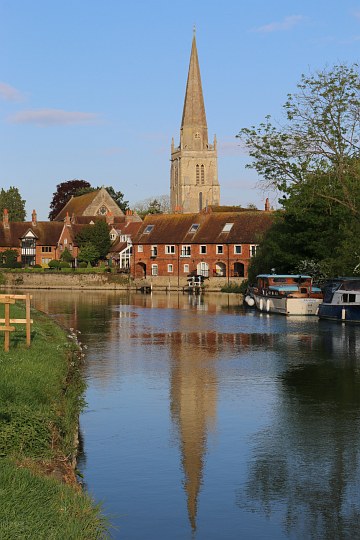 The main parish church seems to have been placed to help direct people from afar.