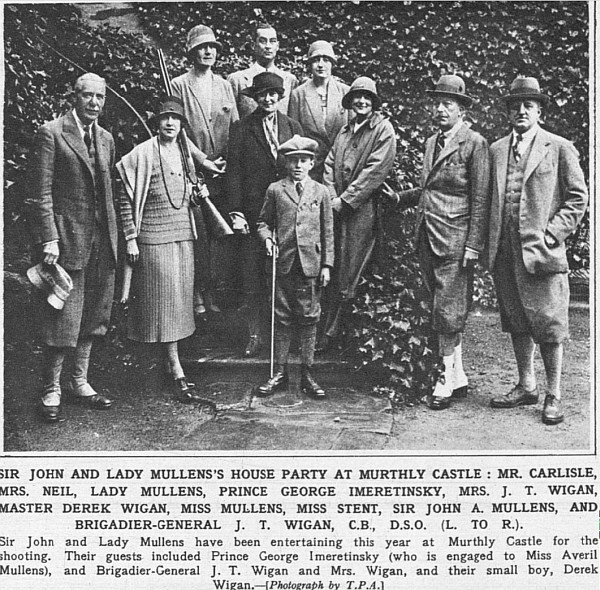 Brigadier-General Wigan, the Coalition Unionist member for the Abingdon Division, resigned last week, giving reasons of business. Abingdon Liberals, placed on record their strong and emphatic protest against the present creation of an untimely and unnecessary vacancy in the representation of the constituency, have decided, in view of the present industrial Crisis, not to invite a candidate to contest the seat.

At this Borough Police Court on Tuesday the only case was that of Edwin Thatcher, of Drayton, who was summoned for using a motor car without an identification plate, at Abingdon, and was fined £1.

The proceeds of the recent concert given by the Abingdon Choral Society enabled £12 to be given to the Radliffe Infirmary, Oxford, and to the Abingdon Cottage Hospital.

14th May 1921
A folk dancing demonstration was held on Thursday 12th May at the residence of Mr Bromley Challenor, and included the famous Morris Dances.

The funeral of Mrs Gillingham, aged 72, the wife of Mr W P Gillingham of ‘Avondale’ Park Road took place on Thursday 12th May in the presence of a large number of friends. Deceased was one of the oldest members of Abingdon Congregational Church, of which Mr Gillingham is senior deacon. The first part of the service was conducted by the pastor (Rev C.H.Gill) in the Congregational Church. Wreaths were sent from the firm of Messrs. Brind, Gillingham and Co Ltd of Abingdon and Oxford.

The Didcot Depot is in future to be policed by the Berks Constabulary, and attached to the Abingdon Police Division. Huts have been converted into quarters for the police, and P.S Humphries, of Wallingford, has been promoted Inspector, and takes charge of the Ordnance Depot at Didcot.

A Ladies’ Croquet Club has been formed in Abingdon, and the Governors of Christ Hospital, Abingdon, have laid down two lawns in Albert Park for the use of the Club. Lady Norman is the president, and Mrs G, H. Roberts, of Radley Road, the hon. sec.

The Abingdon grocers have agreed to closing their shops on the first three days of the week at 6 p.m. Thursday is the usual half-day and on Friday and Saturday the shops will he closed at the usual hour.

Mr. and Mrs. George Matthews, of Spring Road, Abingdon, celebrated their golden wedding last week, and were the recipients of many hearty congratulations. Mr. Matthews has been for over 63 years at the Abingdon clothing factory, and his fellow workers made him a presentation of a case of pipes. 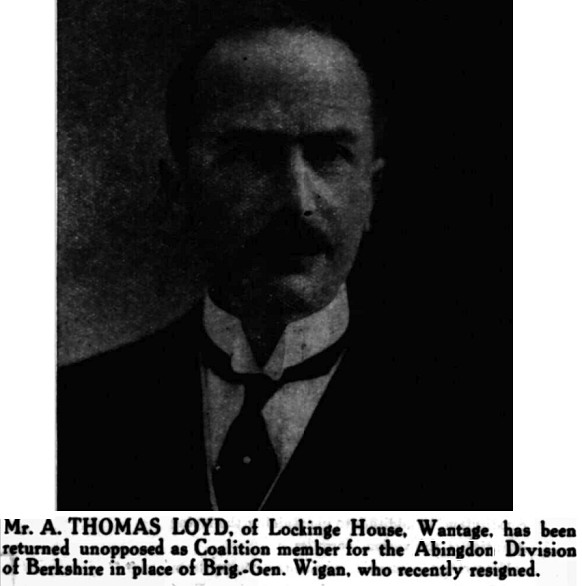 The festival of Whitsuntide was duly kept at the Abingdon Churches, of St Helen, St. Michael, and St. Nicolas, which were appropriately decorated. Early celebrations of the Holy Communion were held in each of the churches, with High Mass at 11 a.m. at St Michael’s. There were good congregations. The Bank Holiday was favoured with delightful weather. On Monday boating and picniccing were the chief items of enjoyment.

The scheme inaugurated in Abingdon for systematic house-to-houses collections on behalf of the Oxford Infirmary and Abingdon Cottage Hospital has been very successful. The amount received in the month of April was £83 13s 3d.

The Abingdon Fire Brigade was called on Wednesday last week to fire at a cottage at Rowstock, tenanted by John Moore, labourer. The only water supply was from deep well, which could not be used by the fire engine, and the thatched cottage was entirely destroyed. Moore, who was working in a field, saw the roof on fire, and in getting on the roof was partly embedded in the thatch, and had to be extracted and taken to Wantage hospital. 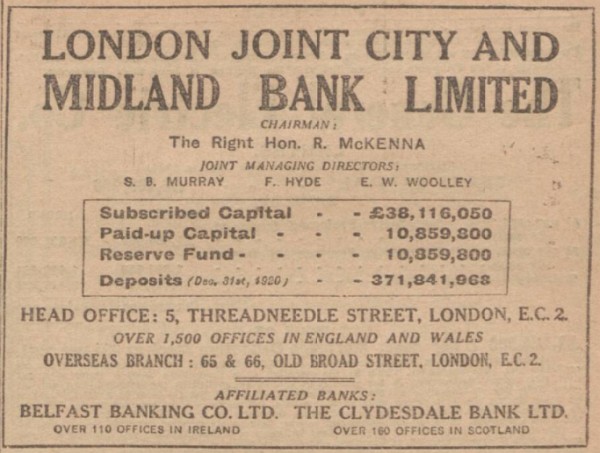 The London Joint City and Midland Bank, of the Square, Abingdon, have transferred their business to a larger premises, acquired at No. 6, High Street, Abingdon. (Became The Midland Bank and then HSBC)

On Thursday in last week, during the workmen’s dinner hour, a fire broke out in the roof electric power house, recently erected by Messrs Cox and Sons, builders, near Radley Road. The plant was used for driving a saw in a large building, near, and had also been used for supplementing the town electric supply. The roof which was of asbestos on match boarding, fell in and the remainder of the power house practically was destroyed. The building and its contents were insured.

For assaulting P.S. Painter, at Abingdon last week, Albert Sheppard, 1st Bucks Regiment, of Didcot Depot, was sentenced by the Borough Magistrates to seven days’ hard labour. The Sergeant said the prisoner came up to him in the Market Place and complained that a landlord would not serve him with a drink. When the policeman told the prisoner the landlord was justified he hit the Sergeant in the face with his fist, and was very violent on the way to the Police Station.

Thank you for the extracts to the Faringdon Advertiser and Vale of the White Horse Gazette on the British Newspaper Archive. Two pictures from the Reading Mercury and one (the first) from The Sketch of 9th September 1925 showing Brigadier-General Wigan.