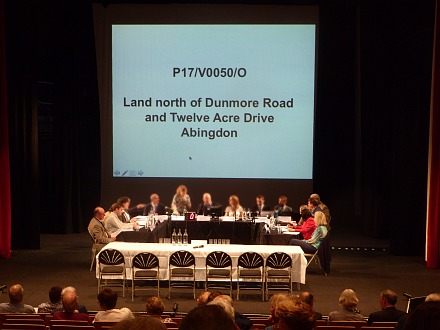 The postponed VWHDC (Vale of White Horse District Council) planning meeting to decide on outline planning permission for an estate of 800 houses north of Abingdon took place at the Amey Theatre in Abingdon School.

The meeting had been postponed because the Environment Agency had an objection, which has now been overcome with some modifications to the plan by CEG, the developer, who we learned had been working on this scheme for several years, and even worked closely with the VWHDC to get the VWHDC local plan adopted – which allows these 800 houses. 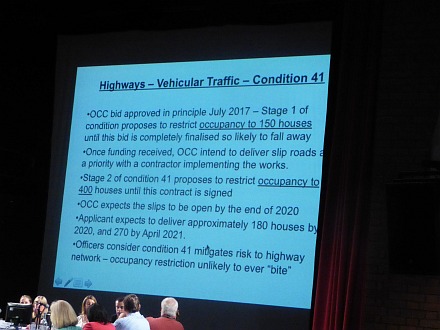 A government announcement earlier today removed the issue that could have held up the plan . It was dependent on the south facing slipways to the A34 at Lodge Hill being built to ease traffic in Abingdon. That slipway scheme will now receive about £9.45m over four years from central government. And central government has further funds to help open the way to new developments, allowing Oxfordshire County Council to feel confident they can ‘forward fund’ the rest – even before developer funding becomes available.

Oxfordshire County Council are now saying the slips could be open by the end of 2020. 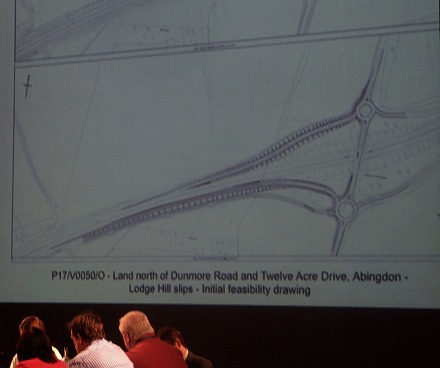 After the news of the A34 Lodgehill Diamond Interchange the rest of the detail was largely nodded through by the committee in a unanimous vote to allow the 900 houses.

On the positive side there was a commitment by CEG that 35% of the total will be affordable housing. There will also be a central area with primary school, community hub, and shop(s). CEG were praised even by some objectors for listening to the community, and said they would continue to listen.