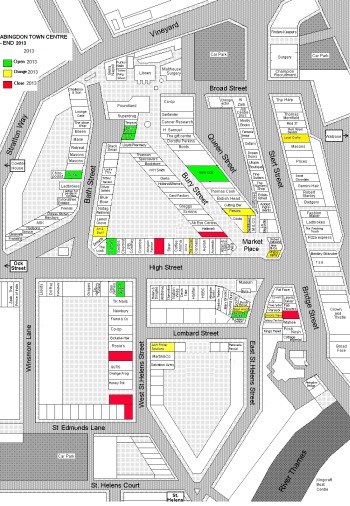 Press on Changes in 2013 for a bigger pdf version. Not a brilliant map and not to scale but it serves this yearly purpose.

The Narrows (Wetherspoons) opened on the High Street in the Old Post Office. QC closed.

Art and Stuff is now where Skinny Hippo was. The Olives has replaced Kitsons.

Philosphy moved to the Market Place, and was replaced by Simon’s News who had vacated ER Goffs, now undergoing a refurbishment.

Salinas came back – more as a Coffee / Snack place than the restaurant it had been before.

Belinda’s Jewellery Box opened where there had not been shop recently on East St Helen Street. Sean Antony should follow soon.

On West St Helen Street it was goodbye to Faulkner Photography and Paul Viney Photography who continue to operate but without a town centre studio. Withy King (moved to Vineyard Chambers), Lansborough Estate (moved to Ock Street), and Natural Health (moved to Coxeter House). AAH Printer Solutions moved from Coxeter House. Chaba Thai moved in where The Thai Orchid used to be.