Back in 2006, when I started doing This Abingdon Blog, one report was about three trees that had been planted in town. One got vandalised, one had a bad lean, and one was doing well.

Here they are again some years later… 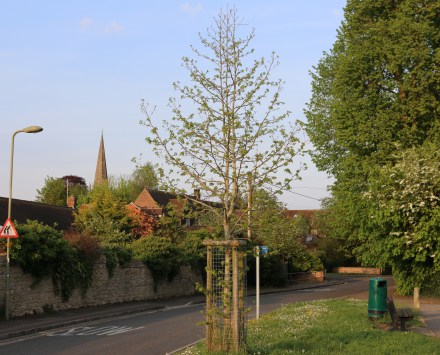 The vandalised tree is long gone but another tree, planted nearby, is doing much better. I hope the new generation respect trees more. 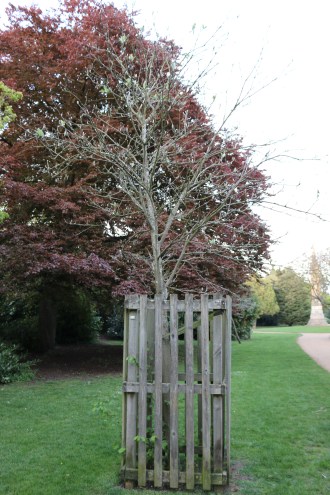 The leaning tree continues to lean and still has a tree guard. 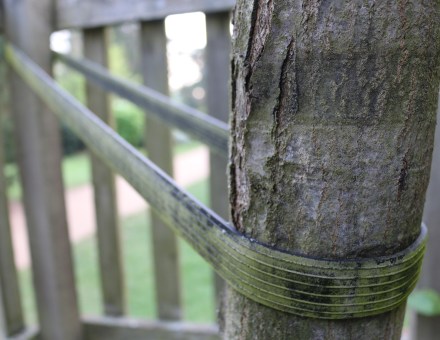 It also has a band to keep it from leaning any more. 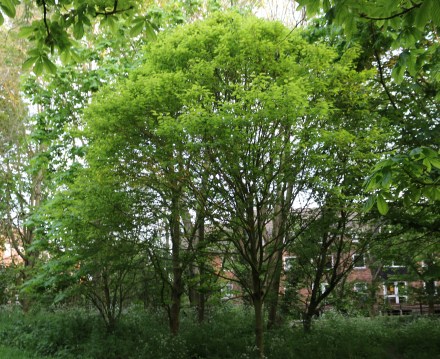 The third tree is doing well. The tree guard has been removed and lower branches cut. That tree was planted in honour of John Jones OBE – a former Mayor and Freeman of Abingdon. 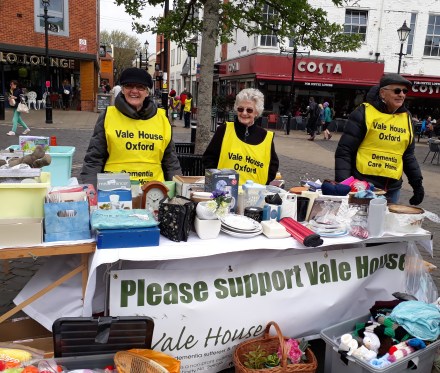 On the Market Place last Saturday Vale House had a stall for fund raising, and raising awareness.

Vale House was founded in 1990 to care for people with dementia however severe or complicated, and to support their families. The original house was in Botley, and now, after a lot of fund raising, they are in a larger, better designed building, at Sandford-on-Thames. Alison Rooke, a former Mayor of Abingdon, is one of their trustees. Their website is http://www.valehouse.org.uk.

Related but quite separate are Dementia Friends in Abingdon. They have courses to help us learn more about what it is like to live with dementia and be able to help when needed. There is a course on 21st May in Abingdon. If you are interested, see if you can find the Information Session and Book. Start by going to ‘Become a Dementia Friend’ then ‘Find an Information Session’ and find locations near your post code. 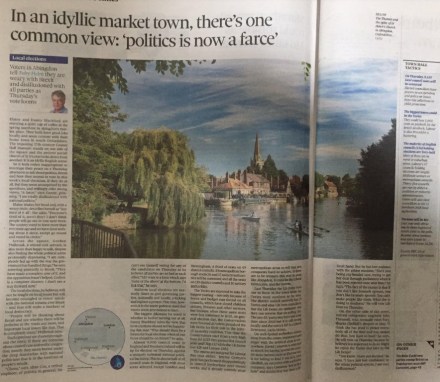 Some of you may have read in the Observer this morning about the people of the idyllic market town of Abingdon saying ‘politics is now a farce’.

Parliament has failed to deliver the 52% Leave vote because David Cameron did not define what Leave meant before the referendum. Politicians have failed to agree a Leave deal that the EU agrees with since.

There are local elections on Thursday, and the Observer observes that Abingdon people are affected by this national disillusionment with politics. People slam their doors against canvassers saying ‘I cannot take any more politics!’

The choice is yours on Thursday if you choose to vote. Some of your local politicians have done a good job locally irrespective of their national party. New people are standing at the local election as well. It is for you to judge. At the very local level we should try to vote for the best people. I hope you end up with an excellent Town and District Council – one that can take Abingdon forward. 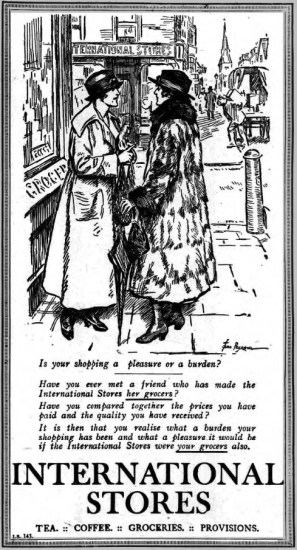 5th April
Mr and Mrs Joseph Fray, for many years master and matron of the Abingdon Workhouse, concluded their offices on Monday last, who after having resigned about two years ago, generously kept on the duties during the war. The Oxford Workhouse being occupied by the military, the inmates were transferred to the Abingdon Institution.and to mark their appreciation of Mr and Mrs Fray’s work during that time has presented them with an inscribed marble clock.

The demobilisation of the Abingdon Red Cross Hospital (Tesdale House) took place the 21st, and final staff meeting ceremony took place at the Council Chamber in the afternoon when the Matron Miss King was presented with an excellent tea service in recognition and gratitude for her work.

The Abingdon Church Boys Club has been restarted at the Old Foundry, near St Helen’s Church, by the river-side. The Rev C. S. Thomas, who left the Abingdon clerical staff to take up armv work, has again taken up the management of the club. 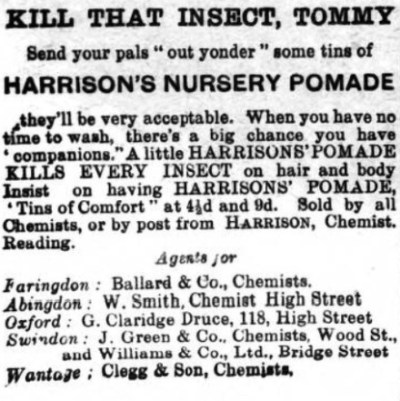 At the Abingdon Borough Police Court on Tuesday, Ernest Butler, labourer, Ock Street, Abingdon, was fined 7s 6d for being found drunk at the Horse and Jockey Inn, Ock Street. It was also reported that the Abingdon lad remanded to the Workhouse till a home could be found, had absconded from that institution that morning at 9 o’clock.

The supplies at Abingdon Cattle Market on Monday last were 22 butchers beasts and 44 fat sheep, all of which were allotted to Windsor.

Thomas George Smith, 23, of West Hendred, discharged soldier, remanded from Thursday last, was brought up charged with stealing from the Milton Military Stores Depot, a roll of rubberoide roofing, value 25s 5d., the property of the Air Ministry. 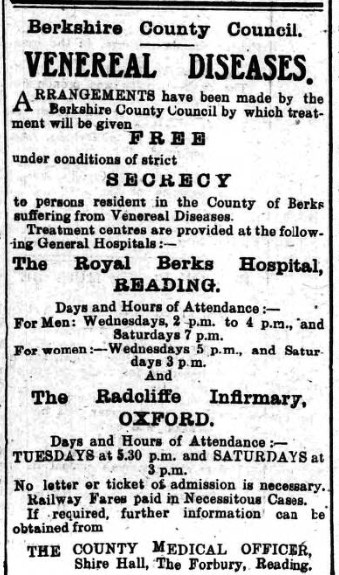 19th April
The Abingdon Cricket Club held a meeting last week to consider the restarting of the Club for the forthcoming cricket season. The Mayor presided, and it was agreed to prepare the ground and recommence practice as soon as possible. The funds of the Club are satisfactory. Many of the old members have been discharged from Military service and a busy cricket season is anticipated.

The working parties of the Abingdon Branch of the Berkshire Voluntary Association for war comforts to soldiers are discontinued, but are asked to continue the work on behalf of St. Dunstan’s Hostel for the Blind.

A fund has been started for the Memorial to Soldiers and Old Boys of Roysse School, Abingdon, who have fallen in the War, and it is suggested to add a wing to the building and place a memorial tablet in the School chapel. The list of subscriptions are … 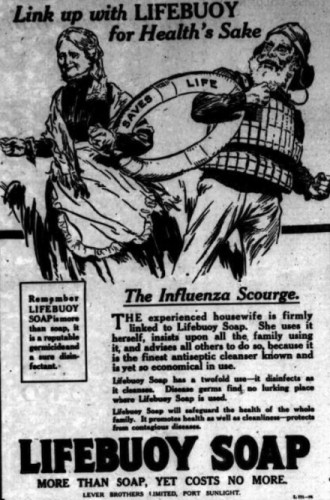 26th April
Easter Services were well observed in the Abingdon Churches and Chapels, the decorations were very effective, and the congregations good. The offertories of St. Helen’s, St. Michael’s, and St. Nicholas’ Churches were given as an Easter offering to the Vicar.

A fire broke out in a cottage at Court 9, Ock Street, Abingdon, on Sunday evening, the occupant being an elderly man named Taylor. The fire was caused by a beam in the chimney becoming ignited. The Fire-Brigade’s prompt assistance prevented much damage from being done.

Thankyou to extracts from the Faringdon Advertiser and Vale of the White Horse Gazette – All Rights Reserved.