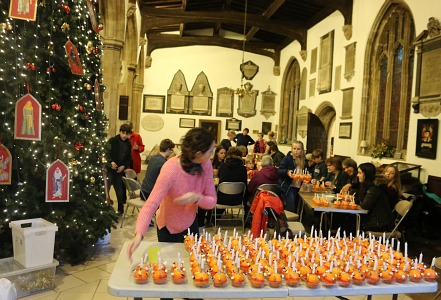 At St Helen’s Church a team of people helped to make the Christingles for the Christmas Eve service at 4:30 pm. 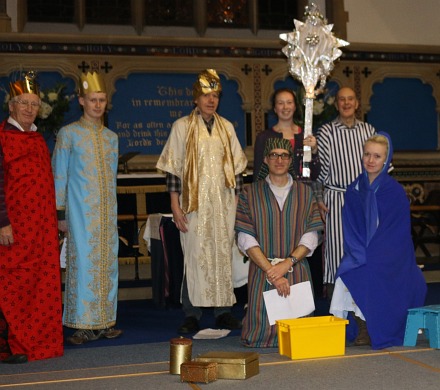 At Trinity we had a rehearsal for the Torchlight Service, also at 4:30pm on Christmas Eve. This year an apprentice astronomer spots a new star in the sky that the older astronomers (wise men) cannot explain. It leads to a stable in Bethlehem and some unexpected happenings.

Yesterday we visited the original Annie’s Tearooms at  the Canal in Thrupp (near Kidlington) and enjoyed Sweet potatoe soup  (featured on the Not Abingdon Blog). 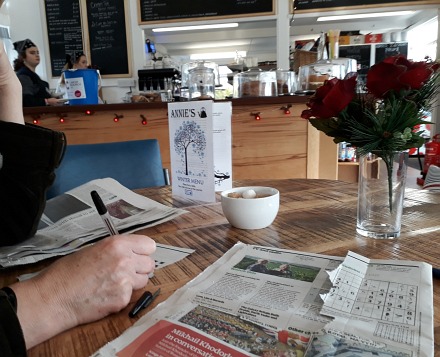 Today we started a walk at Annie’s at the Boathouse in Abingdon. We split the sudoku and  crossword so we both had a puzzle to do, then enjoyed some warming Leek and potato soup. We noticed that other Thames walkers had also stopped off here for refreshments. 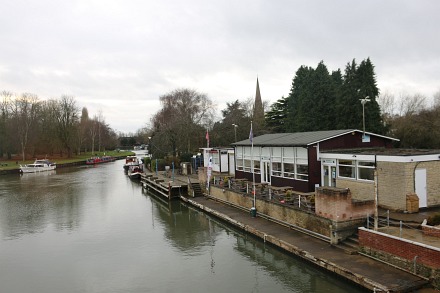 We left Annie’s behind and walked along the far bank of the River Thames. For anybody driving along the A34, Abingdon might just look like a place of business parks, and out of town shopping. 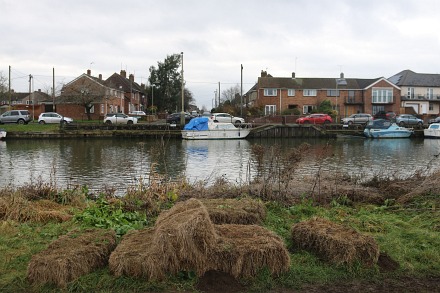 but Abingdon is a river town with all its buildings on one bank of the River Thames. 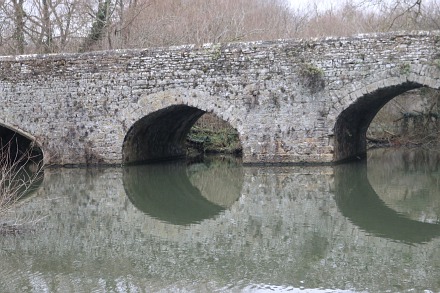 The walk in the direction of Culham is muddy in places so boots are a good idea at this time of year. The walk passes close to the old Culham Bridge, built in the reign of Henry V, and no longer used for traffic. So you can head back to Abingdon from there along the causeway or… 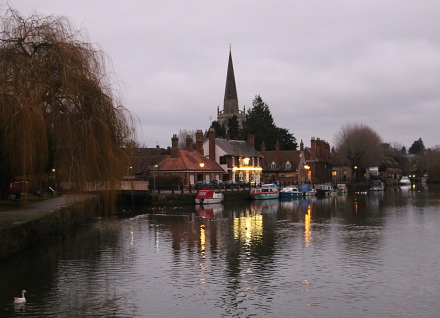 take the route via Sutton Courtney (next Thames crossing) and back to Abingdon – a seven mile walk. The spire of St Helen’s Church can be seen for miles around, and the bright lights of the Old Anchor are there to welcome visitors on winter evenings. 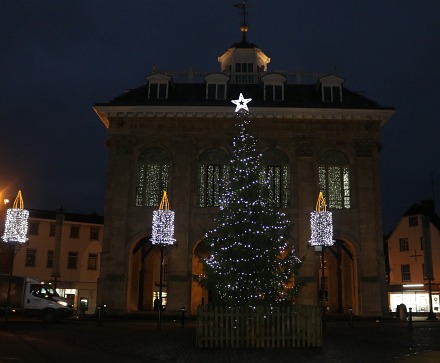 The splendid Old County Hall was completed in 1682 by Christopher Kempster, one of Wren’s master masons during the building of St Paul’s Cathedral. The County Hall houses the town’s museum, and is well lit up at this time of year. 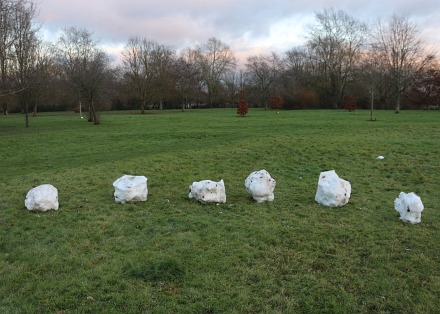 The 21st December, the Winter Solstice, is the shortest day of the year. The 22nd December will be longer. Winter solstice is celebrated by some people as the darkness turning back to light.

The impact of winter is not as perilous as it once was. In medieval times life would have been hard and food in shortening supply. Many of the animals would be slaughtered to keep people alive. We still experience the short days but most of us escape the food shortages. I was in Waitrose earlier today, as we piled up our trolleys, and one lady said, ‘We won’t be going hungry!‘

The snow has melted but I did get a picture of snow balls in the shape of a stone circle in the Abbey Meadow a few days ago. People still go to stone circles to celebrate the Winter Solstice – four days ahead of the celebration of the birth of Jesus Christ. 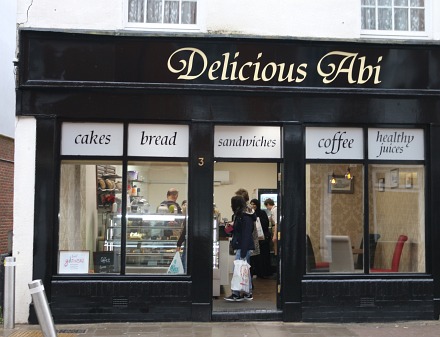 A new patisserie opened this morning in West St Helen Street. As well as selling patisseries and bread the new shop serves coffee and other drinks and sandwiches. It is in the shop recently vacated by Polski Sklep Żubr. 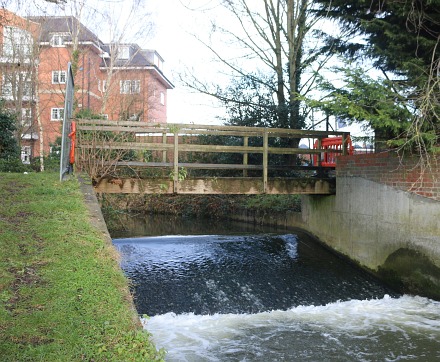 There was a meeting of the Abingdon-on-Thames Finance and General Purpose Committee this evening. There were questions from the public submitted beforehand.

I asked when will the foot bridge, allowing access to the Ock Valley Walk, be re-opened. The answer given by Mike Badcock, Leader of the Town Council, was ASAP (As Soon as Possible). They have the budget to rebuild the bridge but do not want to do any work until they have confirmed with the Environment Agency (EA) that the EA have no plans to change the weir as a result of flood alleviation measures in Oxford. So the date depends in getting an answer from the EA.

Eight different business owners from the town centre also came with questions about the Town Centre Business Improvement District (BID). They do not think the BID is giving value for money and were asking for the town council to act as a bridge in bringing the businesses and BID together so they can get answers about how their business rates money is being spent. They would like an AGM and to see full accounts. They also questioned whether they are legally locked into the BID for five years or whether there is a break clause.

There were also questions about the Guildhall. The Town Council is looking to work with another council on a long term use for the modern Abbey Hall. But before that happens Jim Halliday, the questioner, asked whether the Abbey Hall can be re-opened for community groups in the interim. The committee were going to examine the figures in private session and come back with an answer. 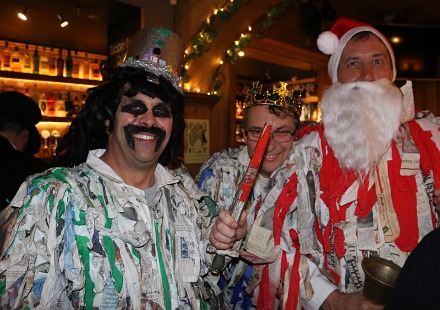 Elsewhere in the town , the Abingdon Mummers Play was doing the round of the pubs in the town centre and along Ock Street. 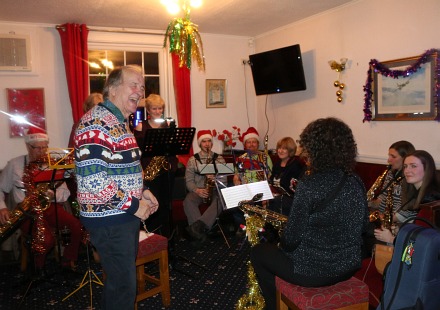 Carols were played and also sung in the Royal British Legion, thanks to George Haslam. 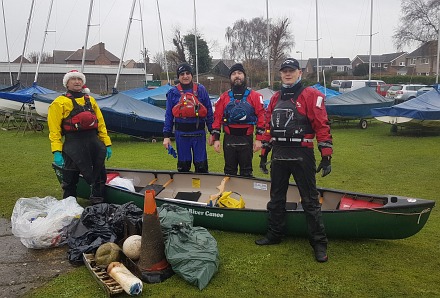 Kingfisher canoe club members were out on the River Thames in Abingdon on Sunday – litter picking.

Jen says “It’s amazing how much rubbish, in particular plastic, we picked up from such a short stretch of river that is a hazard to birdlife and fish and everyone who enjoys the river and its banks!” 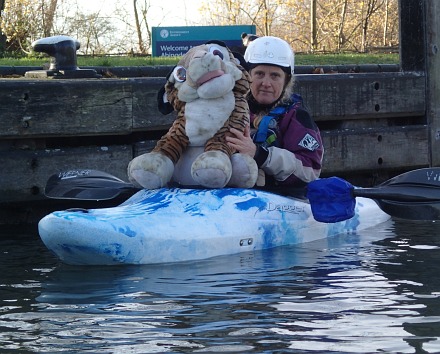 There is also a picture of Tigger who Jen rescued from the river a little while ago. 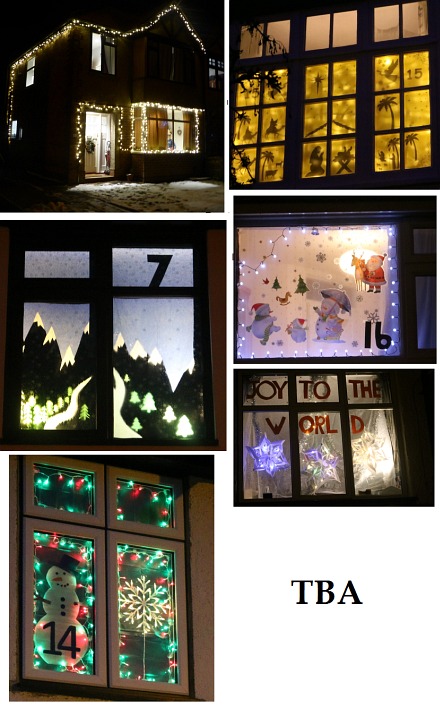 Along the top part of South Avenue in Abingdon, the window designs are being revealed one day at a time during advent.

The window for today – day 17 – shows ‘Joy to the World’, and outside the house is a board explaining what is happening. You can donate money in the envelopes provided and pop it through the letter box for the Helen and Douglas House Charity.