The transport consultation ‘Connecting Oxfordshire: Local Transport Plan 2015-2031’ ends on 2nd Apr 2015. So there is still time to respond at https://consultations.oxfordshire.gov.uk/consult.ti/CO_LTP4/consultationHome 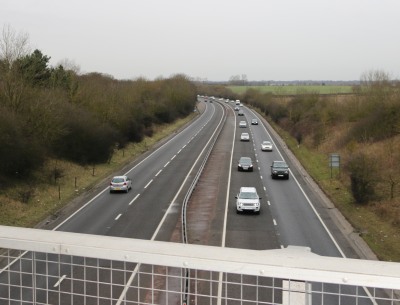 The plan includes a scheme to provide south-facing slip roads onto the A34 at Lodge Hill in Abingdon, a scheme that sounds more likely to go ahead if recent pronouncements are correct. 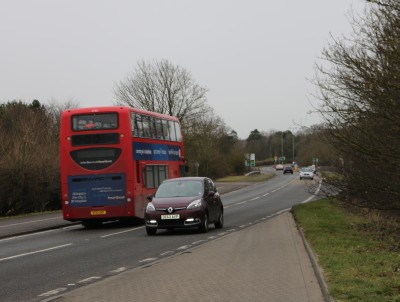 The transport plan also talks about moving Park and Rides car parks away from the city of Oxford towards the towns. The first will be at Bicester. Then there could be one at Lodge Hill, with room for 1600 cars for people coming from the south. The last time a park and ride was proposed for Lodge Hill, in 2004, it would have held half that number.

The plan also mentions a lorry park at Lodge Hill – dependent on the slip roads going ahead.

The transport plan also safeguards a tract of land to provide a South Abingdon relief road if significant additional development are allocated to the south of the town in future. This would involve a direct link from west Abingdon to the A415 to the east. 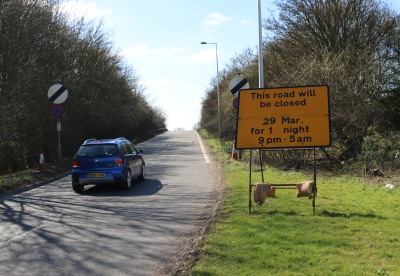 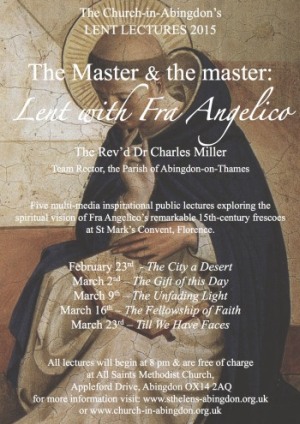 Revd Dr Charles Miller has been lecturing at All Saints Church for the last five weeks on the frescoes of Fra Angelico. Charles came under the spell of the painter during a sabbatical spent in Florence in the winter of 2013, and the lectures are the result of that sabbatical, and his interest in Christianity and Art. The lectures were both art history, and drew spiritual lessons from the life of Fra Angelico. 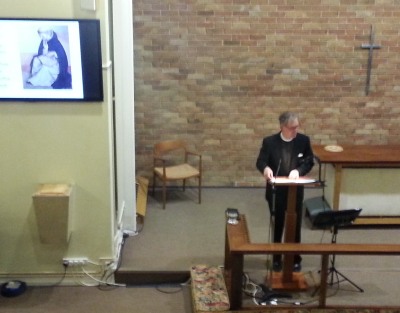 Apologies for the poor quality of this picture taken with a phone from the balcony.

Most of the lectures concentrated on the frescoes painted in San Marco Dominican Convent in Florence – intended for the monks who lived in the cells. There are lectures notes on St Helens Church website but not many images. You had to go to the lectures for those. Many people did go, particularly the first two weeks – when the roads round All Saints Church were packed with cars.

(Hope this makes sense. The meeting ran late and I need to go to bed so here goes…)

At the Town Council meeting there were presentations by The Abingdon Music Centre, detailing what work they were doing for the community, from their base under the Guildhall, and how they wanted to work with the Town Council in developments at the Guildhall. Then the Friends of the Pool said they were getting their message across and people realised that the Pool’s future is at risk, and so were happy for the consultation to continue. 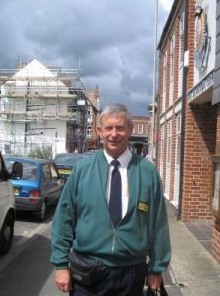 There was a discussion about the council’s previous position on Residents parking. Town Centre Councillors, Julie Mayhew Archer, and Leslie Legge put their own proposal that the Town Council negotiate with the County Council for improvements to the scheme and the possibility of employing new staff in future when the remaining full time warden retires. The Council then agreed this new position. The council then joined in saying what an excellent service wardens had given over the years. I took the picture in 2007 when there was a Save our Traffic Wardens Petition.

There was some lengthy debate about changes to the council’s committee structures. The main change is that there will be a new committee for Community Services which takes over grants, and community events. 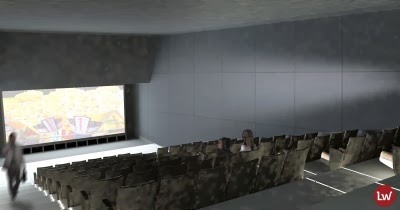 We learned that tenders had been received by the Guildhall Committee, from Cinema Operators, which are under consideration, but all of that is confidential, and an announcement may not be possible during an election period. 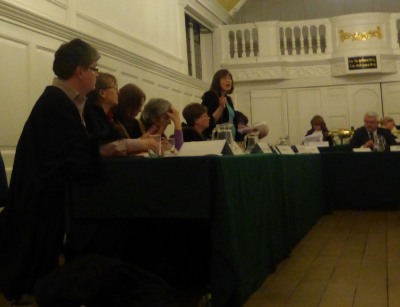 Councillors then discussed some motions proposed by individual councillors…

Another concerned the way the Abbey Meadows Consultation had been undertaken. As a result the Council voted by 10-7 to ask the Town Clerk to write to the District Council asking for the current consultation to be halted, and a more open, transparent consultation be started in Summer 2015.

Lastly I believe that Councillor Helen Pighills will be the new Mayor so long as she can get re-elected. 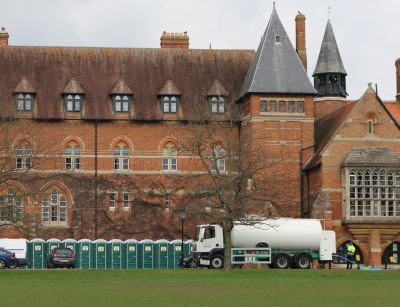 For almost a week much of Abingdon has experienced fluctuations in water pressure due to a burst water main in Culham. At its worst, last Wednesday, Abingdon School had to bring in portaloos.

Elsewhere bottled water was laid on as some houses were getting some odd smelling water caused by a compound used in lining the pipes.

During the week Thames Water diverting water from other sources while the water main was being repaired – causing fluctuating pressure. I gather water pressure has returned to normal in the last day or so.