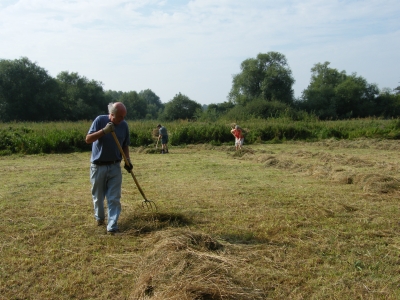 The wildflower meadow in Barton Fields was cut last Wednesday. This year, the farmer who mows it for us was unable to bale the hay, as his baler had broken down. But the hay needs to be taken off the field, as if it is allowed to rot where it is cut, it would fertilise the ground and encourage rank grasses and nettles to flourish. So we called on the help of our Green Team, who turned out in force. Fifteen volunteers took on the task of raking and stacking the hay with pitchforks, from two and a half acres on Thursday and Friday. On Saturday we were joined by thirteen members of the Abingdon Green Gym, who completed the task for us and also helped with a couple of other tasks on site. In total, about a hundred hours of effort was put in by volunteers over the three days.

Members of our Green Team undertake annual botanical surveys and weekly butterfly counts in transects across the wildflower meadow and adjacent grassland. The meadow was sown and planted in 2009 and since then we have recorded over 50 species of flowering plant who’s abundance has increased year on year. The number of butterflies in the herb-rich meadow is three times that found in adjacent unenhanced grassland. Bees and other insects also benefit from the meadow flowers.

Details of these surveys can be found on the Abingdon Naturalists website: abnats.org.uk/survey.html .