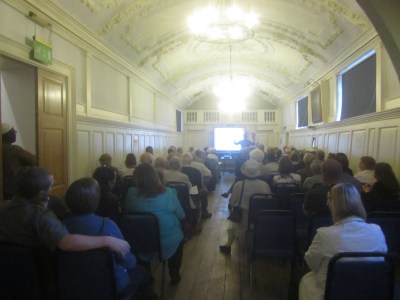 In a crowded Roysse Room representatives of the recently set up Oxfordshire GP Consortium were there to tell people about their planning for the future of the NHS in Oxfordshire if the Health and Social Care Bill gets finally passed. The knowledgable audience were generally sympathetic but had some reservations.

The Oxfordshire GP Consortium is currently shadowing and working with the Oxfordshire PCT (Primary Care Trust)  and in the next two years could start to take over the leadership of how Health Services are ordered and paid for. That is £1,300 per annum for each one of us in Oxfordshire.

The Oxfordshire Consortium would do the big deals with the likes of the Radcliffe Trust who run the large hospitals and with the Oxford Health Trust for mental health and community health services.

There are also six local sub-consortium with some local flexibility. Those 6 are based on groups of GPs that already work together more than district council boundaries. Abingdon is now part of the South West Oxfordshire sub-consortium along with most of the Vale and South Oxfordshire.

People did not seem worried about GPs (Doctors) having more control over NHS budgets as they do have the knowledge and our trust. But people were worried about the effect of a large reorganisation of the NHS, and the private sector taking a greater role. It was said that a lot of functions and admin roles would just move over from PCT to Consortium – such as performance monitoring. But consortium are quite new and they are still exploring the best way to organise and the best way to include patient participation.