Cyril Stacey, West St. Helen Street, and a Scholar of the Abingdon Church Boys’ School, has been awarded a county junior scholarship tenable at Roysse School, Abingdon. (He did not have to pay the £58 fees)

The Abingdon Vineyard Sub-post Office has been transferred to No. 38, the business premises of Mr A. Gammage grocer.

Mr and Mrs Frederick Mills, of Maud Hale Villas, the Bridge. Abingdon, celebrated their golden wedding, and were the recipients of numerous congratulations.

The funeral of retired Abingdon solicitor, Mr Walter James Sedgefield, aged 81 years, of Bath Street, Abingdon, took place in the Cemetery, on Thursday in last week in the presence of a large number sympathisers and friends, including the Mayor, and several Magistrates and Town Councillors. Deceased was for nearly 50 years Registrar of the Abingdon County Court and Clerk to the Borough Magistrates. Although deceased did not take an active part in the public life of the town, and was of a somewhat retiring disposition, he was ever ready generously to help in the causes of local charities and public institutions.

Services of United Prayer meetings were held in Abingdon, on Monday and Tuesday in St. Nicolas Church, and on Wednesday and Thursday this week at the Abingdon Wesleyan Church. The special subjects of prayer are respectively classified for international peace, social peace, peace and unity among Christians, and the Kingdom of God in the world. 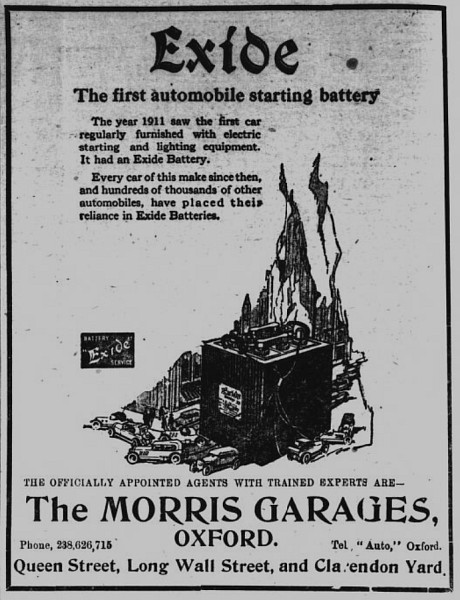 Ralph Brenyan, baker, Edward Street, Abingdon, was charged with being drunk whilst driving a trade motor car in the parish of St. Helen’s Without, Abingdon, on January 1st, and also without having lights attached. For the first offence defendant was find £5 and 16s costs, and for the second offence a fine of £2 was imposed.

Miss A. L. Smith, for many years connected with the Abingdon Post Office as supervisor, has been presented with a purse of Treasury notes, subscribed for by the past and present staff, on her retirement. The presentation was made last Week by the Postmaster on behalf of the subscribers.

The Abingdon Church Sunday Schools gave their annual entertainment in the Corn Exchange on Wednesday evening in last week. The programme consisted of a variety of action songs, sketches, dances, &c. The hall was well filled by an appreciative audience.

The number of cases treated during the past quarter in the Abingdon Isolation Hospital was 67, viz., 53 of diphtheria and 14 of scarlatina, sent from the contributory places as follows;—Abingdon Urban and Rural, 37; Wantage Urban and Rural, 11; Ramsbury, 2; Goring, 1; Bradfield, 3; Faringdon, 1; and Witney. 13. 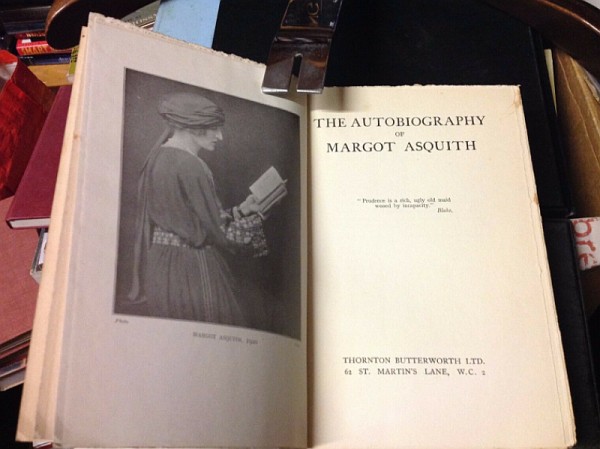 Mrs Asquith has presented the secretary of the Abingdon Y.M.C.A with a copy of her autobiography, bearing the following inscription: ‘As a token of my great respects for this wonderful institution, Margot Asquith.’

The adult members of St Helens Church Choir, Abingdon, were entertained by the Churchwardens to a capital supper and musical evening, in the Roysse Room on Wednesday evening of last week. The Vicar presided.

The inmates of the Union Workhouse were given another entertainment on Thursday evening last week, when the programme was arranged by Miss M Beckett, one of the Church School teachers. Mrs Reynolds (Guardian) presided, and the programme consisted of songs, etc., and a short play by juveniles and friends.

The marriage of Captain Hugh Baillie, eldest surviving son of the late Major Baillie, J.P., of Caldecott House, Abingdon, with Miss N Ferre, daughter of Lt. Col H.M. Ferrer, C.B.E. Took place last Thursday at Holy Trinity Church Kennington Gore. The Church was fully decorated for the occasion and the service was fully choral. The ceremony was performed by Rev. H. Blackmore, D.S.O., M.C., chaplain to the King, who was assisted by the Vicar of Abingdon. 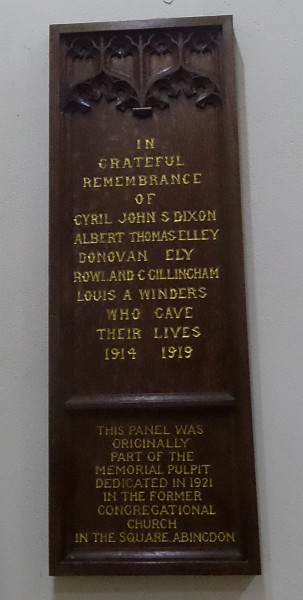 On Thursday evening last week, the Congregational Church War Memorial, a new oak pulpit, was unveiled by a former pastor, the Rev. A. T. Rose. The service was very impressive, the anthem being ‘What are these.’ and the hymn ‘For all thy Saints’ was reverently rendered. The pastor Rev. C. Gil preached an appropriate sermon.

Last Friday evening Mr Arthur Chivers, bootmaker, aged 61 years, 11 Edward Street, Abingdon, died suddenly in Abingdon Baptist Chapel, Ock Street. It appeared deceased went to the choir practice, and whilst waiting near the door for other choir members to come fell down dead, from heart failure. An inquest was not considered necessary.

The Rev J.P. Morris, the newly appointed minister of Abingdon Baptist Chapel was heartily welcomed on Thursday last week at a social gathering in the Schoolroom.

The Bowling Club held their last whist drive of the winter season, when about 200 were present.

The Abingdon Horticultural Society’s annual meeting took place last week at the municipal buildings. Mr J.S Simpson presided. The accounts showed a total income of £223 15s 6d which included gate money at the August show of £81 5s 9d and subscriptions of £57 1s. Prizes amounted to £41 9s. The next show was fixed for Thursday August 11th.

At the police court, Alfred Welsh, clerk, 19, Exbourne Place and Mary Wheeler of Shippon were both fined 1s 6d for riding a bicycles on the footpath in Faringdon Road.

At the County Bench, James Welsh, described as a stableman, of no fixed abode, was charged with stealing a bicycle and sentenced to a months hard labour.