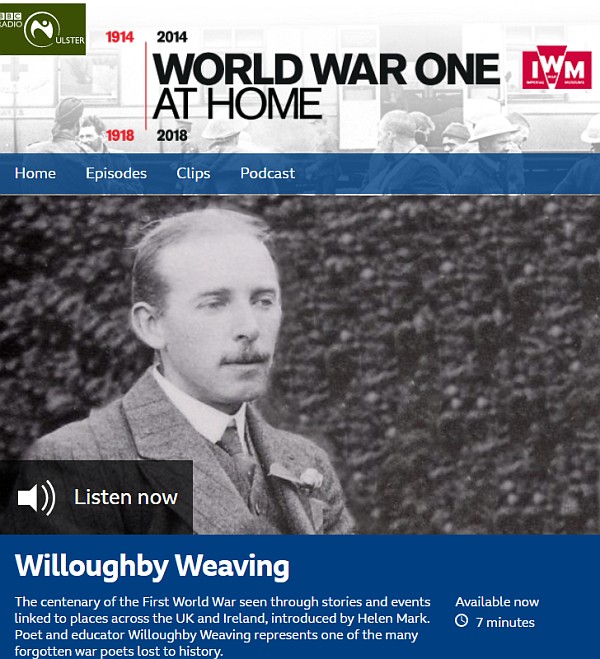 Willoughby Weaving attended Abingdon School, and Pembroke College. He was a teacher in Ireland and signed up at the start of the first World War to serve in the Royal Irish Rifles. After being invalided out, he returned to teach and became a prolific poet. He is now mostly forgotten apart from some war poems – revisited during the recent 100 year remembrance of the first world war). Here is a poem written in 1920

In one vast cloud the skies were clad;
There was a silence worse than sound
Discordant, such as makes men mad
In muffled dungeons underground,
When first they sing, and scream to save
Their deafening reason from the grave,
That living grave of worse than death.
There was no stir of lightest breath
But hot stagnation in the air
Like a suspended horror there
Poised at its utmost by the stress
Of unimaginable excess
Birth-bound. Then suddenly at last
The lightening like a lancet passed,
And all that fierce and maddening strain
Fell ruining with routs of rain.

Ian Pindar first came to public attention after the National Poetry Competition in 2009. You can read his successful poem, Mrs Beltinska in the Bath, at https://poems.poetrysociety.org.uk/poets/ian-pindar/. Ian was interviewed by the Oxford Mail and said “The reason I love poetry is because it is ambiguous – there is mystery there.”

Andrew Jamison is another contemporary poet who works as a teacher at Abingdon School. He comes from Ireland.  Here is Andrew reading September 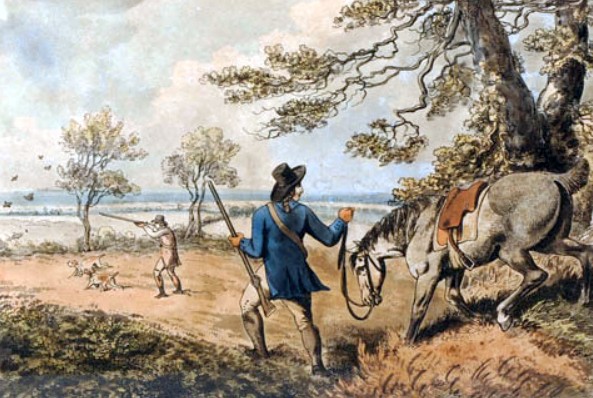 Another poet who attended Abingdon School was Phanuel Bacon. He became a clergyman in the mid 1700s. One of his poems can be found on a very specific blog called The snipe in Literature where you can read the full poem.

I’ll tell you a story, a story that’s true,
A story that’s dismal, and comical too;
It is of a Friar, who some people think,
Tho’ as sweet as a nut, might have dy’d of a stink.
Derry down, down, hey derry down.

This Friar would often go out with his gun,
And tho’ no great marksman, he thought himself one;
For tho’ he for ever was wont to miss aim,
Still something but never himself was to blame.
Derry down, &c.

It happen’d young Peter, a friend of the Friar’s,
With legs arm’d with leather, for fear of the briars,
Went out with him once, tho’ it signifies not
Where he hired his gun, or who tick’d for the shot.
Derry down, &c.

Away these two trudg’d it, o’er hills and o’er dales,
They popt at the partridges, frighten’d the quails;
But, to tell you the truth, no great mischief was done,
Save spoiling the proverb, as sure as a gun.
Derry down, &c.

But at length a poor Snipe flew direct in the way,
In open defiance, as if he would say,
“If only the Friar and Peter are there,
I’ll fly where I list, there’s no reason to fear.”
Derry down, &c.

All rights reserved for the two poems quoted.