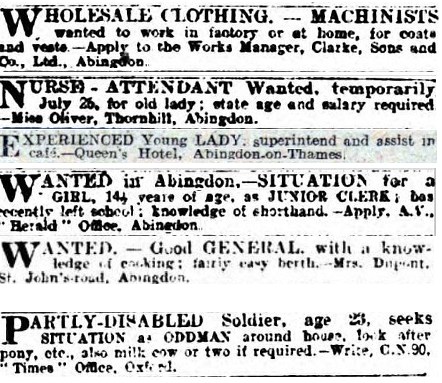 July 5th
The news of the signing of the Peace Treaty reached Abingdon about 7 p.m. on Saturday, and there was an outburst of cheering by large crowds, including soldiers from Milton Depot. The Abingdon Town Band paraded the streets, and fireworks in the streets’ were indulged in.

At Abingdon on Tuesday evening, an angler caught nearly 21 lbs. of barbel from the river Thames.

The Abingdon Oddfellows held a most successful river trip to Streatley on Thursday last, which was greatly enjoyed by upwards of 170 people. There were two boats requisitioned for the trip, and started from Abingdon at 9.30 a.m. reaching home again at about 10 p.m. A short stay was made at Wallingford on the outward journey, and luncheon and tea were provided on board, the caterer being Mr G. Hathaway, Stert Street, Abingdon. 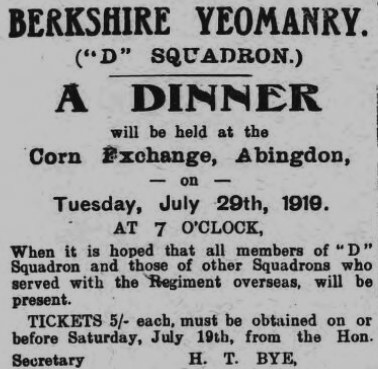 July 12th
Major W. Aldworth, eldest son of Mr and Mrs W. Aldworth, confectioner. West St. Helen’s, was a recipient of the D.S.O. at the King’s Investiture at Buckingham Palace, on June 26th. Major Aldworth had five brothers serving, one of whom has made the great sacrifice.

At the Police Court on Thursday last the Abingdon lad who absconded from the Union, was ordered to be sent to Neath Reformatory till he reaches the age of 19.

A Peace Thanksgiving Service was held at St Helen’s Church on Sunday last when the sacred edifice was crowded. The Vicar preached the sermon, and at the close the Te Deum and National Anthem were sung. A procession from the Market Place – accompanied by the Town Band and the Mayor and Corporation – to the Church took place in order to attend the service .

Soldier’s Mysterious Death.—An inquest was held at the Camp, Sutton Courtenay, on Monday, before the Coroner, Mr B. Challenor, on the death of J. H. Beesley, aged 20, of the Northumberland Fusiliers, who was found shot Thursday evening at the Camp. It appeared from the evidence that deceased was one of the sentries on duty on Thursday evening, and about 10 30 p.m. a witness named Pte. E. Bell, saw Pte. Fairhurst running down the hut alone. When he asked Bell if he had blown the alarm whistle. He replied No. A shot was soon afterwards heard which sounded as if coming from the guard-room

After other evidence of somewhat conflicting nature had been given, a verdict that “death was due from a gun-shot wound not self inflicted, but somehow unknown,” was returned.

A verdict of Suicide during temporary insanity was returned at Abingdon inquest yesterday on Lady Bliss, wife of Sir Henry Bliss of Abbey House. It was stated that the deceased, who had been suffering illness for sometime, was found dead in bed, having taken cyanide of potassium. 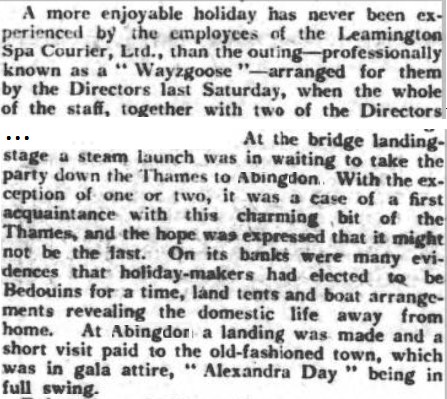 July 19th
Abingdon Cottage Hospital Pound Day this month produced contributions to the total of 4761bs., of which 3031bs were from the Abingdon Schools.

The Abingdon and District Master Baker’s Association revived their annual summer excursion on Wednesday in last week with a trip to Southampton by char-a-banc. There were three conveyances for a party 80, including friends and employees. A start was made from Abingdon at 7 a.m„ and six hours were spent at Southampton, arriving back at Abingdon at 11 p.m.

Alexandra Day in Abingdon was observed on Saturday last, and the proceeds were in aid of the local Hospital and Sanatorium, Oxford Eye Hospital and Radcliffe Infirmary, and the North Berks Nursing Association. A country fair was held in the Market Place, a Punch and Judy Show in the Borough Buildings Yard, and tea and concert in the Corn Exchange in the afternoon. The proceedings finished up with a popular entertainment in the evening, when the hall was crowded.

A poultry show of the Abingdon Branch of the National Utility Poultry Society in aid of the local Alexandra Day celebration on the following Saturday, was held in the Corn Exchange, on Thursday last.

The Abingdon Roysse School Founders Day was renewed (after the War) on Wednesday week, when there were present a large company of parents and friends. A choral service was held at St. Helen’s Church in the afternoon, when the Dean of Pembroke was the preacher. The school prizes were afterwards distributed by Brig -General J. T. Wigan, M.P..

An Open-Air Service was held in the Park, Abingdon, in connection with the local Comrades of the War Association, on Sunday afternnoon last, when there was large attendance. The service was conducted by the Vicar, and the Salvation Army Band supplied the music.

A conference of the Citizens’ Housing and Public Welfare League was held on the lawn at Caldecott House on Thursday evening last, when a local branch was formed. The Vicar of Abingdon presided, and Mr A. T. Pike, of the Garden Cities and Town Planning Association gave an address. The conference afterwards elected 30 members of both sexes (15 of each) representatives on the Council.

At the Abingdon County Bench on Monday last Dorothy Brooks was charged with attempting suicide on July 5th. On the 5th inst. Gertrude Clarke,a fellow worker, saw the prisoner vomiting, and on asking what was the matter the prisoner replied “I have done it, I have drunk some spirits of salts, I meant to do it.” The medical testimony was that he found prisoner in great pain and her lips red and swollen. He gave her an emetic and she was afterwards able to be conveyed to Abingdon Union Infirmary.

William Brooks, engine driver, the prisoner’s father, said his daughter had suffered from St Vitus dance when a child. The Bench bound prisoner over for 12 months in the sum of £l0, and her father in £50. 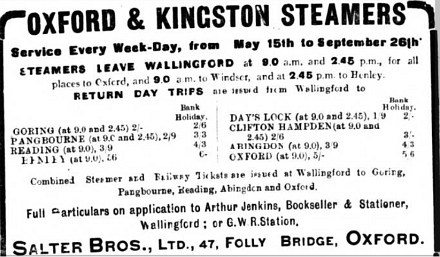 July 26th
Abingdon Peace Celebration was observed at Abingdon on Saturday, and in spite of the inclement weather, the arranged programme was carried out and witnessed by a large number of spectators. The proceedings commenced with the parade of demobilised soldiers, about 150, in the Market Place, from whence they marched to the Guildhall Yard, where the King’s health was drunk. An old disused cannon, for many years standing in the “Crown and Thistle Hotel” Yard, was fired several times, and in the evening fired again in the cricket field. The decorations of shops and houses were profuse and the town presented a gay appearance. Peals of bells were rung from St. Helen’s and St. Nicholas’ belfries and from the former at noon a muffled peal in honour of the gallant dead. In the afternoon there was a lengthy programme of athletic sports and races, including a marathon race of 7 miles, which was won by H. Pocock. In the evening at the invitation of the Mayoress a smoking concert was held in the Corn Exchange for the overseas soldiers.

Thankyou for the extracts to the Faringdon Advertiser and Vale of the White Horse Gazette – Adverts and the Leamington Spa outing report were taken from various places where ‘Abingdon’ appeared in a search of the British Newspaper Archive in July 1919.