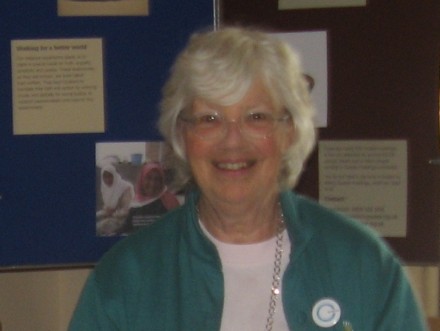 On Saturday there was the funeral of Ruth Baker, a well known lady in the Church in Abingdon (CiA). She had often represented the Society of Friends, or ‘Quakers’ at CiA events, and on numerous charities.

The South Oxfordshire Crematorium had room for about 100 people but that was not enough as people were crammed into the lobby. The Quaker style funeral began with a short introduction, to explain that there would be times of quiet, and that anybody who felt moved could stand up and say some words.

A lot of people did contribute. Her grand children told how she always gave them her full attention, listened to whatever their concerns were, and was always there with wise words. Other people told how she brought people together in lots of ways and was always so welcoming and loving. What I did not realise was that she was a Doctor, having gained a PhD at Oxford – that was after getting a 1st class degree in the infant science of Biochemistry at Oxford. At that time however, she decided to dedicate her time to bringing up her children, rather than following a scientific career.

The funeral details can be seen at the Tonks Brothers website. There is also a link to make donations to Ruth’s charities, and a link to the webcast for anybody who could not get to the funeral – and wish they had, or could not hear from the lobby.

The picture is from this blog in 2007. Anybody who wants to find out more abut the Quakers and their unique style of silent worship can join a small group on Thursday evening at St Ethelwold’s House.