Sustrans say “National Route 5 of the National Cycle Network is a long distance route which connects Reading and Holyhead via Oxford, Banbury, Stratford-upon-Avon…” But by all accounts, National Route 5 through Abingdon does not get the repairs or priority that the prestigious name National Route should merit.

It was opened back in the June 2000 when Mr John Disley, Oxfordshire County Council’s transport planner said “The network will dramatically improve cycling facilities and will contribute greatly to the county council’s objective for increasing cycle use.” 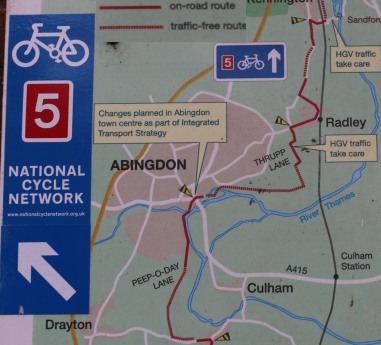 The sign in the Abbey Meadow area still says”Changes planned in Abingdon town centre as part of Integrated Transport Strategy.” The cycling part of that strategy through the town centre never happened. 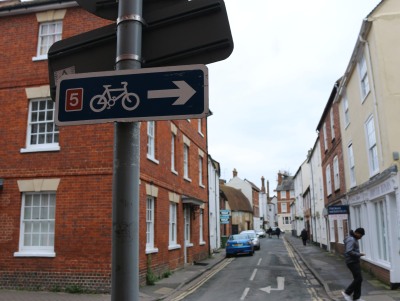 Signage is worse than 15 years ago. One of the signs on West St Helen Street is only visible to pedestrians, and faces the wrong way. 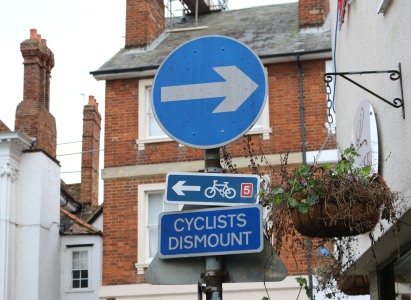 And if you do find your way from there to Lombard Street you are soon told to dismount.

Colin Walters, a town councillor between 2007-11 made strenuous efforts to make the route through town joined up with a proposed contra-flow at the top of East st Helen Street. It was turned down, on safety grounds, and no alternative has been put forward. 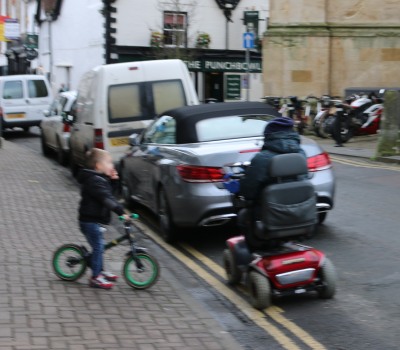 To make matters worse, a car is parked on the double yellow lines (on National Route 5) where a dropped kerb would allow access to the pavement for the mobility scooter. This is in a town that has 2 hours free parking.