This Blog reported 4 years ago that Hathaways had closed, and back in April showed scaffolding going up round the old baccy shop. Hathaways was the shop on the High Street that sold smoking paraphernalia and souvenirs.

Since then the interior, the back and the roof have been rebuilt and the scaffolding removed. A little bit of Hathaways still lives on in another shop in Abingdon. The walking sticks, and tobacco pipes were taken over by E R Goffs after Hathaways closed. There are also a range of  bubble pipes and colourful baccy tins. As well as its core newsagency business Goffs tries to fill gaps in the Abingdon market in an enterprising way. For example, they are also a Western Union agency for people who need to send money abroad. Mrs Goff still owns the freehold, and visited recently for the first time in a while, and was shown a display of  improvements since the current lease holders took over. It is part of the lease conditions, I believe, that the name Goff stays above the door. Last week there was a window display in the Sue Ryder shop to celebrate Diwali – the most well-known of the Hindu festivals. I think we should be saying ‘Happy Diwali’ today but the display has already moved on to Halloween. That small side window regularly reflects the changing seasons. 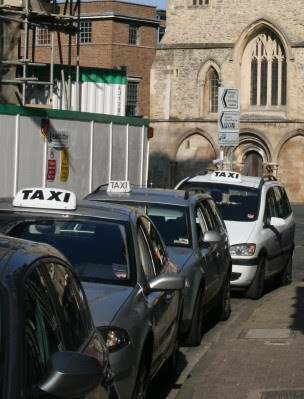 Through the side window can be seen a row of taxis. Taxi ranks are soon to change in Abingdon. Elsewhere in town double yellow lines are to be blasted away to give additional spaces for taxis, but outside Sue Ryder the taxi rank is to be replaced by a loading bay for the museum, and an additional residents’ parking place. A Christmas Shop is about to open where the Community Shop used to be along Bury Street.

In the window it shows 60 days to Christmas. The Community Shop has moved along on the same side, and this half term week there are play activities thanks to the North and South Abingdon Children’s Centres. Outside what was the Ox Public House, on the Oxford Road in Abingdon, signs on the hoardings now advertise “Fruit and vegetables…” “Fresh bread and cakes…” “You shop we drop…”.