For the second time during the centenary of the commemoration of World War I, the Abingdon (Borough) Roll of Service has been read at St Helen’s Church. The first time was in 2014 ,one hundred years after the start of the war, and this second time is today, November 10th 1918, at the end of the bloody war.

Lots of people were invited to read. Some with family connections, some not.

They read Surname, Christian names, and address. The reading took on a particular rhythm with the emphasis on the surname, many of which were repeated lots of times. The reading was sometimes broken up with poems. The Deputy Lieutenant of Oxfordshire (the Queen’s representative) read the the end of the G’s. Then Ewart Hemmings, a former Mayor of Abingdon, read H’s into the Hemmings, including his father. There were a lot of Hemmings, and at least four were read from the pulpit together with the place of death. Another name to be read from the pulpit was King, Percival Arthur, 22 Ock Street. There were also a lot of Kings. Percival was killed in action at Mons while serving with the Royal Berkshire Regiment as part of the British Expeditionary Force. He was Abingdon’s first fatality of WW1 and King street on the new Morland Garden development is named after him. Thanks to Steve for sending me that. Exbourne Road,  a street of 31 houses in Abingdon, has 18 large poppies on display. Each poppy in a front window represents men from that house who signed up to answer the call of duty during WWI. From one house, six men / lads signed up.

From this small street, 34 men signed up; six were never to return; eight were wounded; and the rest returned having been through the hardship and horror of war. A cascade of poppies, one for each of Abingdon’s fallen in WWI, falls from the beams of St Nicolas church in the marketplace.  The Abingdon Crochet group from Masons created the poppies to commemorate the sacrifice.

Events over the weekend include:

A lot of the shop windows in Abingdon town centre have poppies and WWI displays as we near the 100th anniversary of the end of WWI on November 11th 2018. Fat Face has the Abingdon WWI Roll of Honour, showing men from Bridge Street who served together with pictures of them and their families. The Abingdon Flower Club has a double display in the Community Free Space. On one side are poppies and military symbols; Thankyou for Sally for this .. 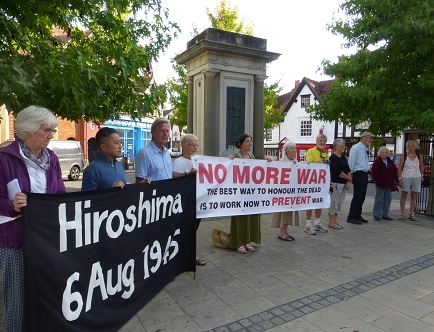 The Abingdon Peace Group had our usual vigil at the War Memorial from 7.45-8.15am, and were joined , as last year, by a young man who comes from Hiroshima and who in fact will be back there this week with his wife and son, visiting his family. 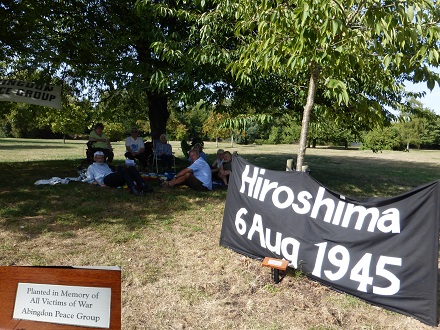 We also had a little ceremony in the Abbey Meadow in the afternoon to dedicate the Peace Tree, a Japanese cherry which we planted many years ago but which had to be replaced recently. We read a “postcard from Hiroshima” which reported on a 50-day pilgrimage taking place now, from the island of Okinawa to Hiroshima. We also heard a poem written by one of our members, Mavis Howard, after a visit to the Luneberger Heath and the death camp at Belsen, reflecting on the deaths there and in the firestorm at Dresden.