Yesterday’s blog post reported how wooden crosses were placed on up to 100 military graves at the Abingdon’s Cemeteries, as an act of remembrance. These include a large number of military graves for crew members based at RAF Abingdon. There are more RAF graves at Our Lady and St Edmund of Abingdon Church. 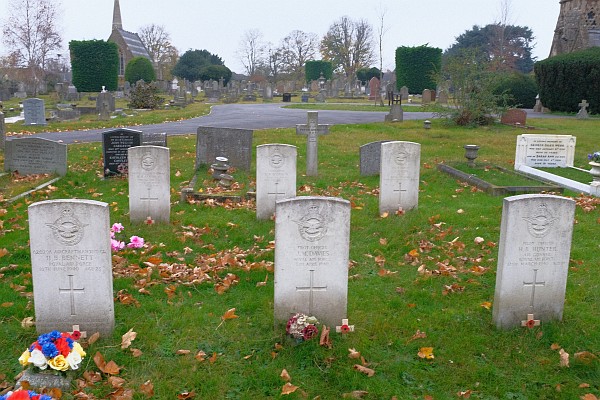 Near the lodge of the Spring Road Cemetery are a cluster of six RAF graves. 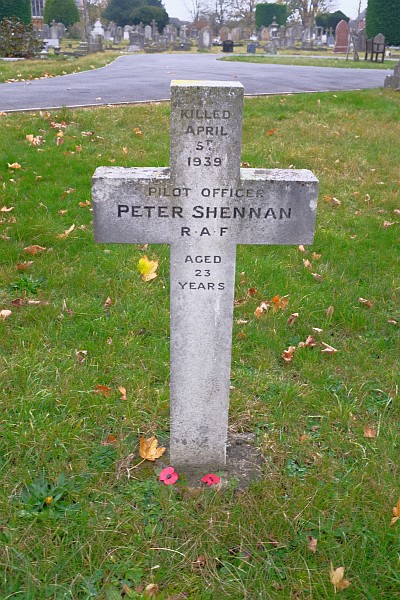 Behind them is a stone cross, of a different design, for Pilot Officer Peter Shennan, of the RAF. Somebody had left poppies there.

On the morning of 5th April 1939 a Fairey Battle, a light single engine bomber, took off from RAF Abingdon for a series of low level bombing practise runs. On the third run, as the aircraft dived to gain speed towards RAF Abingdon, the pilot became aware of something leaving the rear cockpit. Banking to check, the pilot saw a body falling to the ground.

The body of Peter Shennan was found soon afterwards in a field near Dry Sandford. The inquest found that he died of multiple injuries. The inquest also noted that his pilot suit did not have an anchorage point. He came from Wolverhampton and was buried with full military honours. The webpage http://aircrewremembered.com/shennan-peter.html has a fuller account and pictures of the ceremony.

In West St Helen Street, as in many other roads in Abingdon, people observed the two minutes silence from doorsteps. A single bell tolled from St Helen’s Church. John beat the drum and people came out, or stopped where they were. Just before 11 the last post played, and at 11, as St Helen’s Church clock struck eleven, the two minutes silence began. We thought of people still traumatised by war – some we know from Syria live in Abingdon. We remembered the young men who went to war, and the many who didn’t come back. 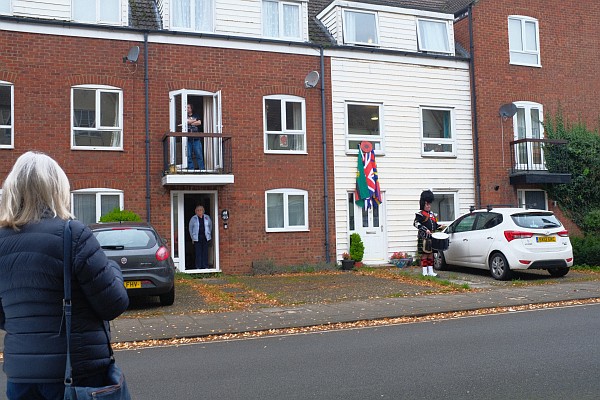 Like other older streets in the town we know some of the names and a little about the men who served in WWI from the Abingdon Roll of Honour. 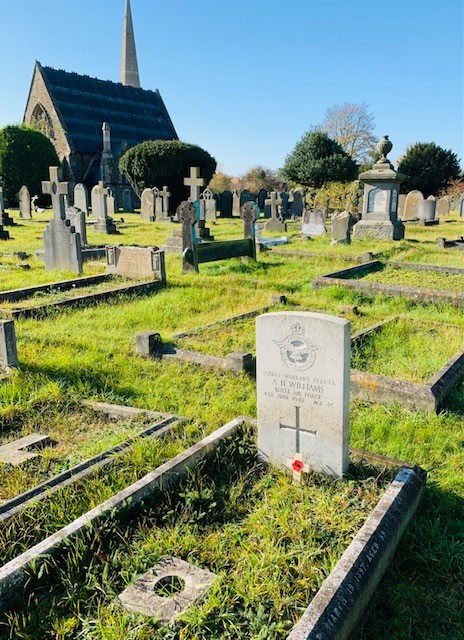 In the absence of the traditional Abingdon remembrance parade and service at the war memorial, Abingdon Royal British legion club has placed almost 100 remembrance crosses on the war graves in both the Abingdon cemeteries: the Spring Road Cemetery (old), 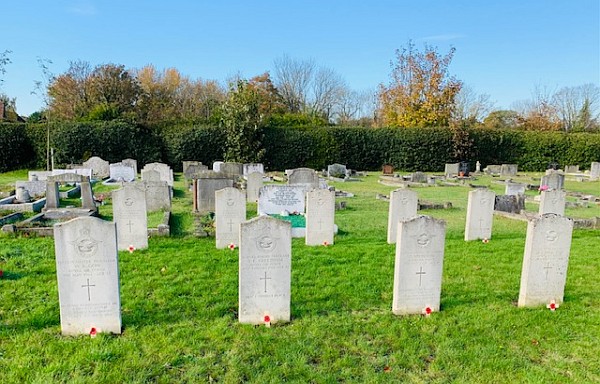 and the Spring Gardens Cemetery (new). 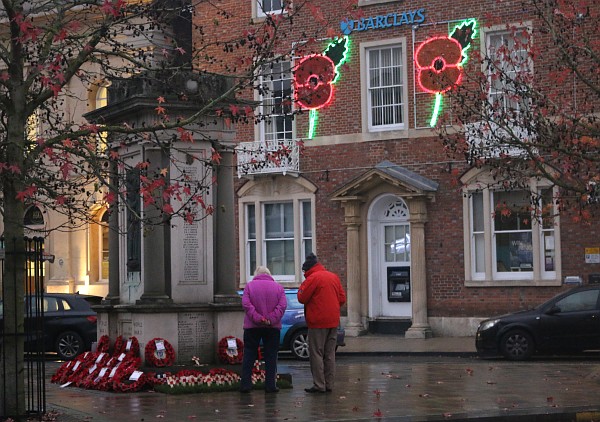 Wreaths and crosses had been placed, without a parade, at the war memorial, by dignitaries, and organisations, and families. Throughout the day people visited and read the inscriptions.

(Thank you to Elizabeth for the video and to Clare for the pictures at the Cemetery)
Here is the Town Council Video of the Deputy Lord Lieutenant, Mayor, Royal British Region, and Chair of the VWHDC laying wreaths … 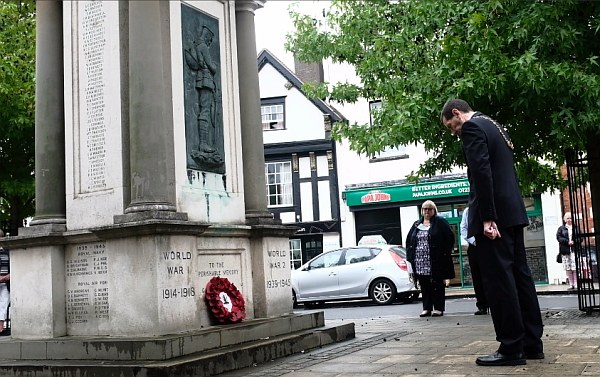 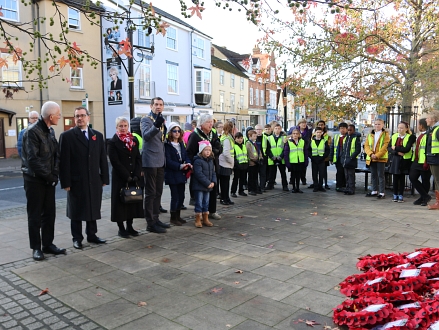 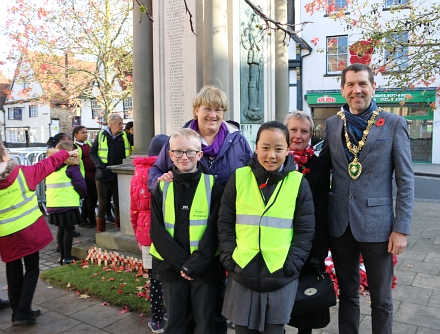 Children, and staff from Thameside School were there for the ceremony. Two of the children are seen here with Headteacher, Miss Anna Grice, and alongside her are Clare – the Poppy Co-ordinator, and The Mayor of Abingdon. After the ceremony, the children went on to look at the wreaths and names on the memorial. They saw that there were seven Abingdon Carters killed during WWI. There were also other Abingdon names they knew. 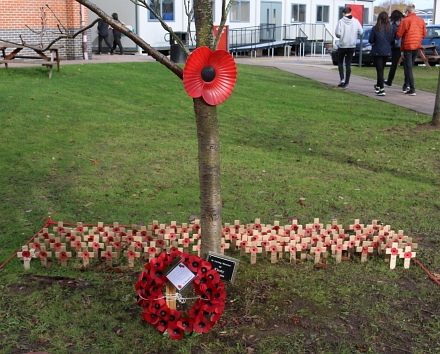 Across Abingdon and the UK, the two minute silence showed respect for those killed in wars. There was another ceremony at 11 am at Abingdon and Witney College. Crosses and a wreath could be seen afterwards. 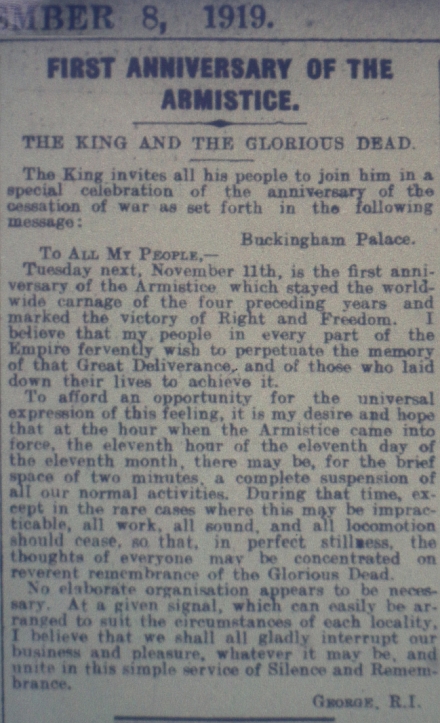 One hundred years ago, in 1919, The King invited all his people to join him in a special celebration to mark the first anniversary of the armistice. That included a two minute silence. 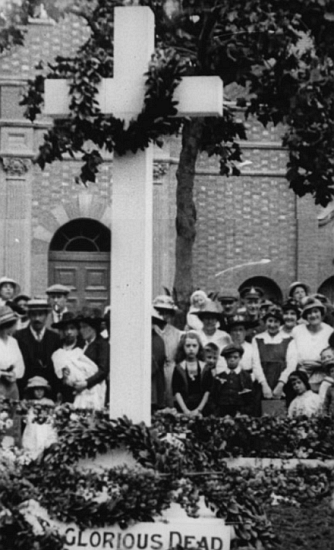 In 1919 a white cross had been placed on the Square. On that first Armistice anniversary  ‘Members of the Abingdon branch of Comrades of the War placed a wreath on the shrine in the Square in memory of fallen comrades.’

The North Berks Herald also reports ‘… A short service was conducted in St Nicolas Church and the whole of the seats in the nave were occupied. The congregation stood in silence at the appointed time.’

Thankyou to Abingdon Library and Herald for the extracts. Thankyou to the Imperial War Museum and their film Abingdon’s Welcome to the Heroes of The Great War for the picture of the temporary shrine. A permanent War Memorial was only being thought about in 1919.