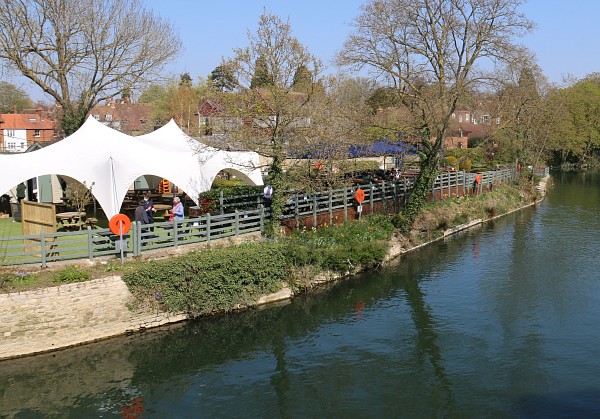 Over the weekend the garden of the Nags Head pub was a popular venue for people to experience their first meal (or drink) out since the lockdown easing. The sun shone on Saturday, Sunday, and Monday. 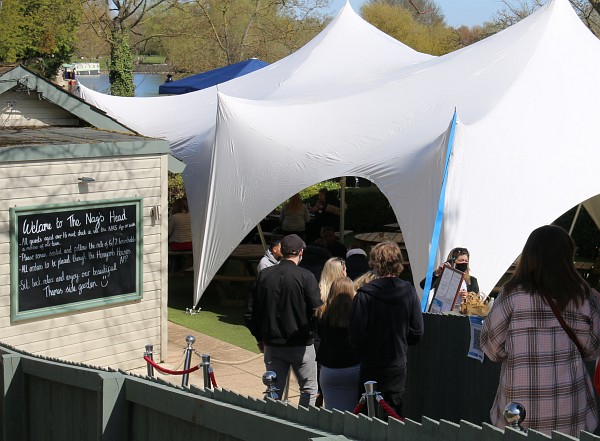 Everyone entering the garden records their details with Track and Trace, and wears a mask to the table. Orders are made by mobile phones. 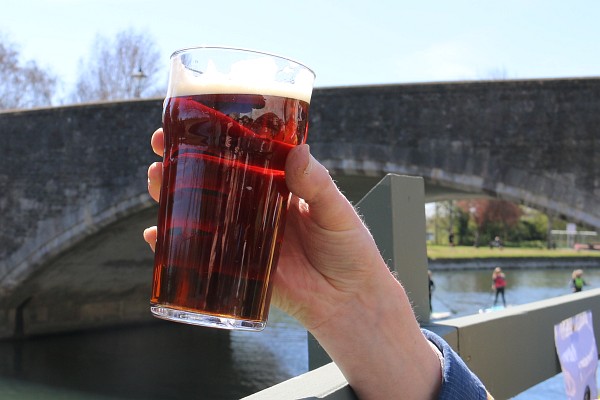 Here is a pint of Abingdon Bridge, brewed by the Loose Cannon Brewery in Abingdon. 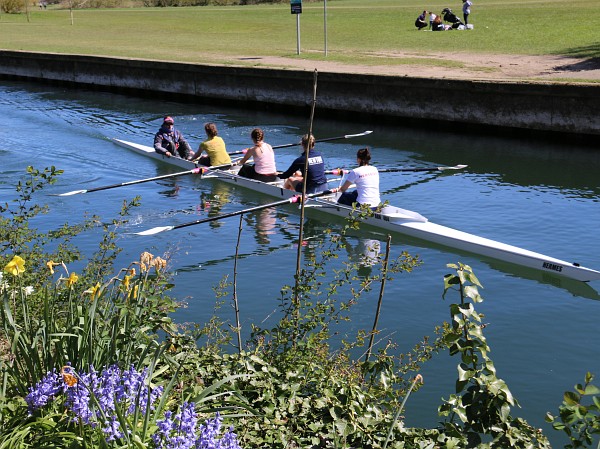 While enjoying the garden the punters can watch the boats go by. 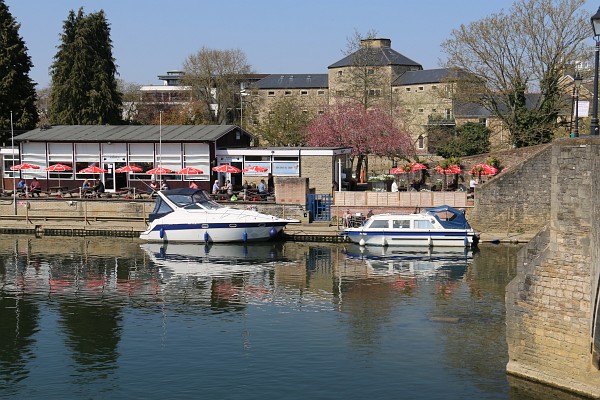 On the downstream side of Nags Head Island, Annie’s Tearooms, also has outdoor tables and has been welcoming people back. 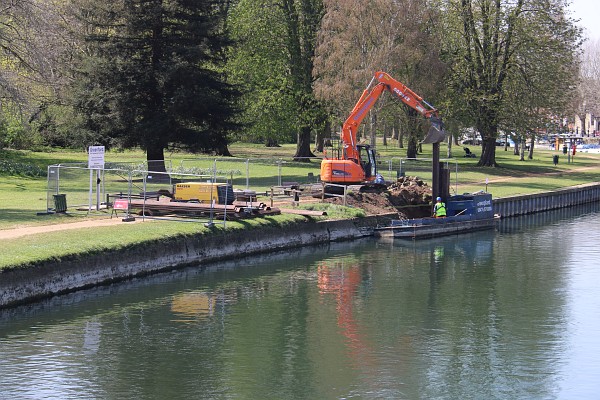 There is currently work strengthening the moorings downstream from Abingdon Bridge. 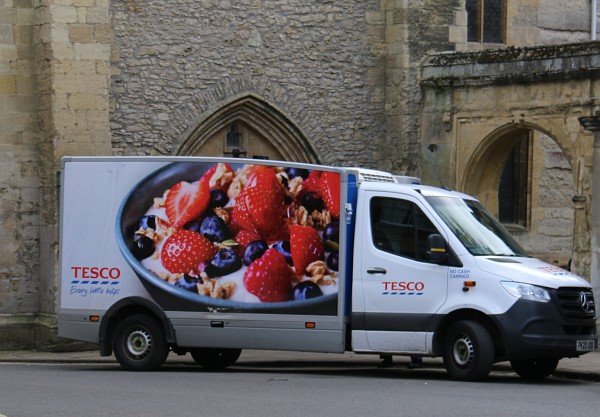 During the pandemic the supermarkets have increased their delivery service and click and collect service. Priority delivery slots have been kept for older and vulnerable customers, including this one pictured by Tesco to the almshouses. 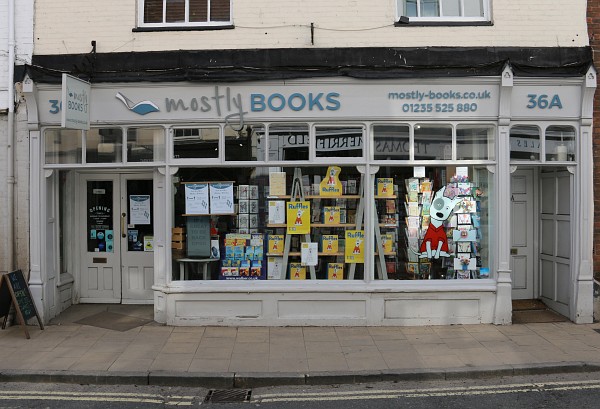 Mostly Books were one of the local shops that seemed to adapt quickly to – never experienced before – trading conditions. They offered deliveries and introduced click and collect. 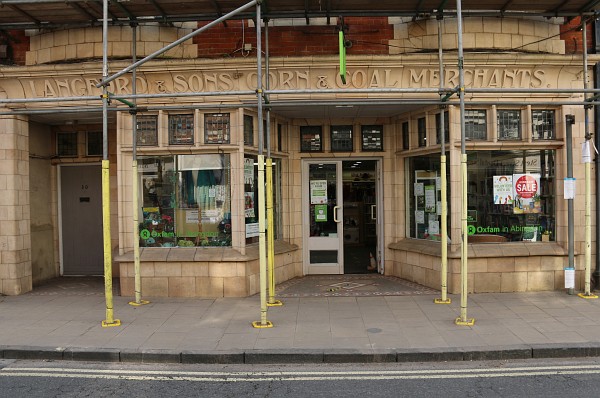 Oxfam re-opened today in Abingdon, a couple of days later than most shops. Let us hope they don’t have to all shut again. Shop safely 🙂 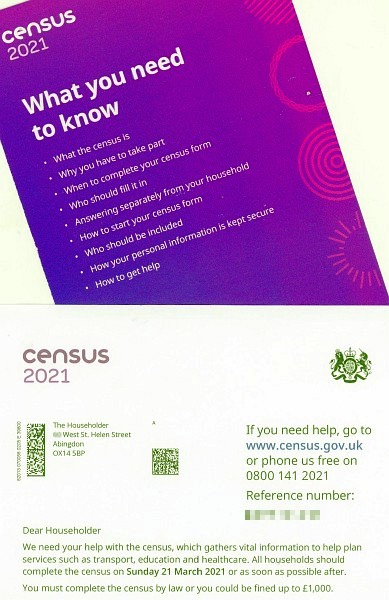 We will complete our census return on 21st March 2021. Somebody investigating our family history in one hundred years time (or whenever the census is released) will see that we live at the same address as ten years ago, and that our professions have changed. In 2021, they will also be able to see for the first time whether we served in the armed forces, our sexual orientation, and gender identity.

The 1921 census was the only time the census was delayed (until June) and that was due to industrial unrest.

New questions in 1921 included more details about profession: what materials people worked in, place of work and their employer’s name. For those over the age of 15 there was information about marital status, and whether divorced. For those under 15 the census recorded whether both parents were alive or if either or both parents had died. It also had detailed questions on education including whether people were in full-time or part-time education.

Commenting on the summary statistics, released in September 1921, a local newspaper said, ‘It is evident that all of them cannot get married unless they go further afield. The single man who shows a preference for the single life will have to run the gauntlet and if the feminine majority care to exercise their powers, they will no doubt impose a heavy tax on bachelors. Women came into many occupations during the war, and many of them continued to be employed. They have cultivated the spirit of independence and are claiming equality of opportunity. The males have no longer any right to pose as the superior sex’.

The individual details of the 1921 census have not been published yet but will be within the next year on findmypast.com. This delay is supposedly for reasons of privacy. However a lot of the details of people now over 100 years old will be already in the public domain from other sources.

Thankyou to Daniel for some more drone flood pictures from January. Two are of the River Ock, showing the water getting close to the houses on the Ladygrove Estate and Tesco. The other is of the River Thames. 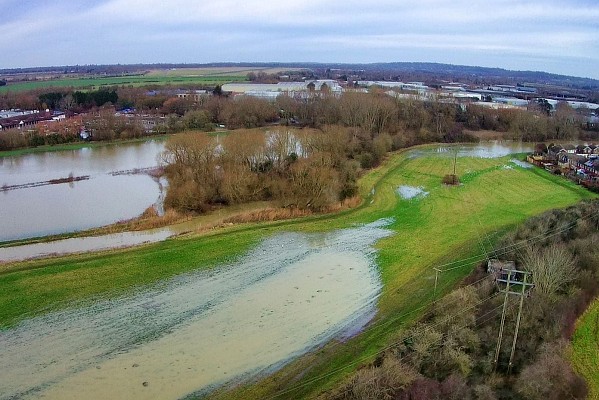 In parliament yesterday (24th Feb 2021), Layla Moran, the MP for Oxford West and Abingdon, got the opportunity to debate with a Minister of the Environment the issue of flooding in Oxford and Abingdon. This was done as an adjournment debate.

Layla pointed out that Oxford West and Abingdon has historically flooded, and in most recent times devastatingly so in 2007 and again, notably, in 2014. Layla said she raised this question again because she felt little progress had been made since an earlier debate with a previous minister. She mentioned delays in the Oxford flood alleviation scheme which could be delayed by up to five years because of bridge works that need to be completed in Kennington. 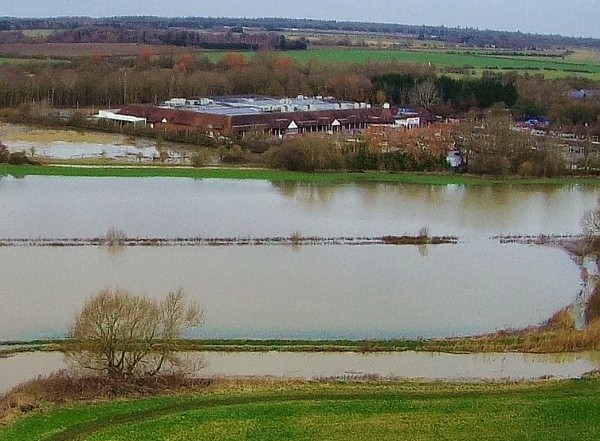 Regarding Abingdon, she said her constituents worried about a repeat of 2007. She said the scheme for a flood storage area upstream of Abingdon on the River Ock had been investigated but for crude cost reasons was not deemed viable. She said residents went from having a scheme to suddenly not having one at all. She said ‘We are not spending enough on communities like Abingdon. If the Minister stands by the calculations, will she at the very least ask the Environment Agency to help draw up new plans for what can be done in Abingdon that it can afford?’

The Parliamentary Under-Secretary of State for Environment, Rebecca Pow, started by saying what the government are doing nationally about flooding – spending more in the new 2021 to 2027 investment programme.

She said she was mindful of the challenges that the town of Abingdon has faced, and faces, and particularly the flooding experience of 2007, when more than 400 homes were flooded by the River Ock. Over recent years, the Environment Agency has taken action to reduce flooding in Abingdon, including increased levels of river maintenance, the provision of a flood wall along St Helen’s Mill, and a robust deployment plan for temporary defences, should they be needed. 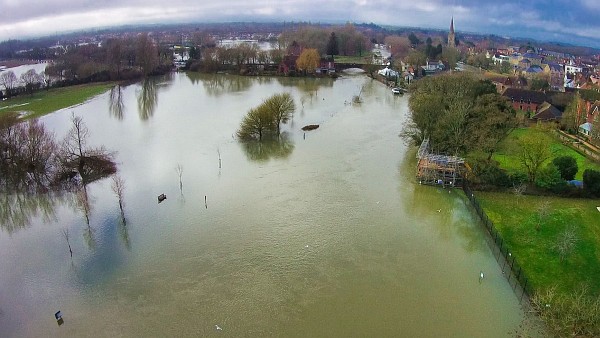 In 2018, the Environment Agency investigated the development of a flood storage area upstream of Abingdon on the River Ock. The investigations found that while a flood storage area was technically feasible, the benefits would not be much greater than those delivered by the Environment Agency’s routine river maintenance. It did not represent value for money to the taxpayer.

She said the Environment Agency is reviewing further suggestions from a local community flood group, called the Ock Valley Flood Group. It is looking at whether there is scope for a temporary flood barrier alignment to be made into a permanent defence, and the agency is gathering evidence on whether this would be technically and economically viable.

The Environment Agency have also been investigating whether natural flood management options would be effective in reducing flood risk in Abingdon.