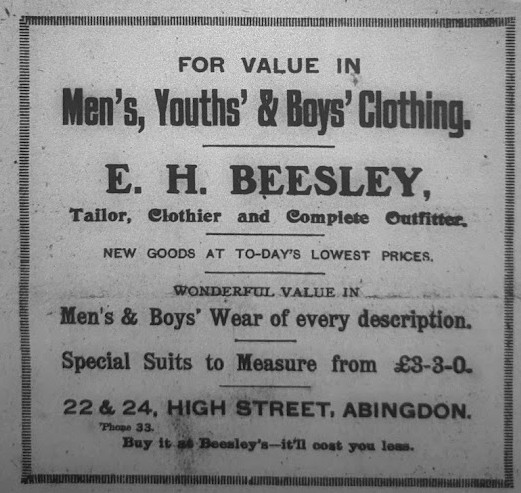 4th March
The East Hendred Tennis Club members and friends gave an excellent entertainment in the Abingdon Corn Exchange Wednesday evening in last week, in aid of funds for the Abingdon Cottage Hospital. The entertainment consisted of a comedy in three acts ‘The Arabian Nights’ — There was a very meagre attendance.

On Saturday last, in the Berks League, Abingdon met (on the Abingdon ground) Culham College Athletic Club. The game was interesting and very clean, and the Culham goalie saving several hot shots. The result was one goal each.

The Roysse School annual steeplechase took place on Thursday in last week on Abingdon Common. In the seniors race 48 started, the course being about 2 miles, and crossing the river Ock twice. The winners were C. Dolphin. J. Williams, and C. Ellis, In the juniors’ race there were 30 starters, the course being about a mile, the winners being H. Aldridge, C. Stacey, and F. Pollard. On Shrove Tuesday a boat race was rowed between the School against Sutton Courtenay Lodge School, in two fours. Sutton won both races with 3 and 3 1/2 lengths. 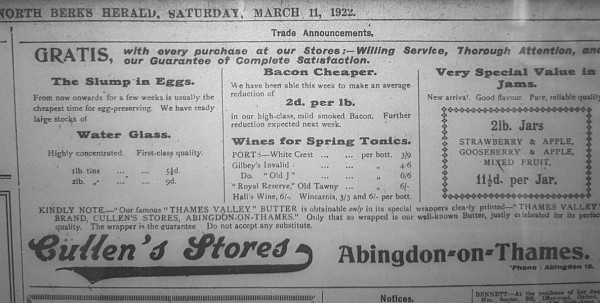 11th March
At the Abingdon Borough Court on Tuesday, Herbert Barge, Park Crescent, Abingdon was fined 5s for riding a bicycle without lights.

A poll took plans on Friday in last week at Abingdon for the eastern division of the Borough representation the County Council. The candidates wen Mr W. Brewer, of Shingfield and Abingdon, the sitting member, and Mr W. M. Grundy, the headmaster of Roysse’s School, Abingdon, who stood in opposition to the Government cutting education expenditure. The result of the poll was as follows Brewer 449, Grundy 170, majority 279. Mr T. Skurray, brewers’ director, Abingdon, was unopposed for the Western Division, and also P Aldwinckle, farmer, Shippon Manor, for the Rural Division.

At the County Bench, Albert Preston was ordered pay 6s per week towards the maintenance of the child of Amy Holloway, single woman until the child attains the age 16 years. Defendant denied the paternity.

The Cottage Hospital annual meeting took place on Tuesday at the Hospital when the Mayor presided over a representative gathering of hon. subscribers and workers. The balance sheet showed a saving in the amount of provisions of over £17O, but over £2OO had been spent in repairs and furniture, thus making the expenses £4O more than the previous year. The deficiency on the past year’s working expenses was therefore £11 6s 9d.

A concert arranged by Miss Johnson, was given on Thursday evening in last week, at the Abingdon Workhouse, which was thoroughly enjoyed by the inmates. Miss Johnson also provided refreshments.

The Baptist Sunday School Scholars gave a capital entertainment in the Schoolroom, on Thursday evening in last week, when there was a crowded audience. The performances of the children reflected great credit on Mrs Graham and Mrs Busby who trained the children.

The newly built Church Rooms are expected to be opened for use this month, and were opened for inspection last Sunday afternoon.

18th March
The Abingdon Town Council, at special a meeting last week unanimously decided to adopt the Public Libraries Act, 1892—1919, for the Borough of Abingdon.

According to the Abingdon Labour Exchange returns last week, there were 77 men and 12 women registered as unemployed, and 10 men and 118 women on short time.

The Abingdon Baptist Sunday School scholars, under the conductorship of Mrs Godfrey, gave an excellent entertainment to the inmates at the Abingdon Union, on Tuesday, which was much enjoyed. 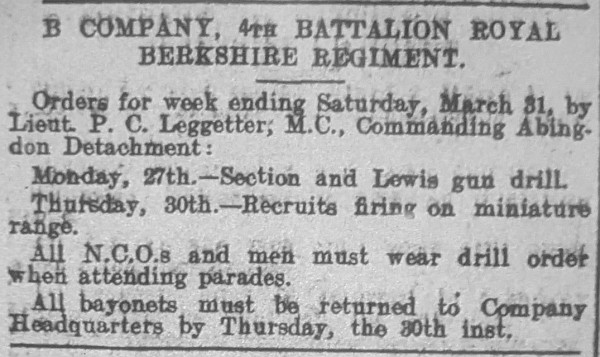 25th March
The Abingdon Boy Scouts received a visit last Thursday from the District Commissioners, who addressed the Scouts on the responsibilities of the Scouts’ promise. Several lads were enrolled.

The Board of Union Guardians, at their meeting last week, had the estimates before them, which involved a poor rate of 10d in the £ as against to 7d in the £ the corresponding period of last year. The rise of the rate was considerably discussed and it was decided to refer it to the Finance Committee to see if the ‘axe’ could reduce -the estimates.

The St. Nicolas Church Parochial meeting held in the new Church Hall, on Thursday evening in last week, when the accounts presented showed a deficit on the past year of about £15. The members on the Church Council and Ruridecanal Committee were elected.

A missionary cantata, entitled ‘An Indian Priestess,’ was ably rendered in the Abingdon Baptist Church, on Wednesday evening last week, by the choir, before a large and interested audience. A collection was made for foreign missions.

At the Abingdon Gas Company’s annual meeting last week the accounts showed a balance of £3,503 11s 11d on the past year’s working,- and dividends of 12s 6d on the original ‘A’ shares and 8s 9d on the ‘B’ shares were made, leaving balance to be carried forward of £2,406. The price of gas was also reduced per 1,000 cubic feet. It was also mentioned that preliminaries were being undertaken with a view to amalgamation with the Oxford Gas Company.

At the Borough Bench an application for using the Stert Street Cinema for three Sunday evening concerts was granted. An application for an occasional license for the Nags Head Inn, on Saturday afternoons when football matches were played at the Abingdon ground was refused.

Adverts brought to you with help from the Nork Berks Herald.