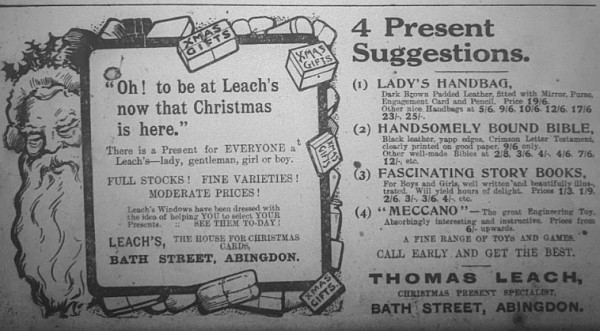 A confirmation service was held at St. Helen’s Church, Abingdon, on Sunday last (Advent Sunday) by the Bishop of Oxford, when about 60 were confirmed, including candidates from Roysse’s School, St. Helen’s Girls’ School, Radley, Shippon and Marcham.

At the Borough Court, Ernest Ackling, of 180, Ock Street, Abingdon, was fined 10s for riding a bicycle without lights in Spring Road, on the 18th inst. Edmund Preece, 57, Ock Street, was fined 5s for allowing his chimney to catch fire on Nov. 14th.

In the Berks and Bucks Senior Cup Abingdon journeyed to Slough, playing against Slough Trading Co. The result was a draw, neither side scoring. The play of both sides was excellent.

The Abingdon Y.M. Social Club met the Abingdon Police in a series of billiard contests on Wednesday in last week, which were much enjoyed. There were eight single-band contests, the Club winning seven.

In connection with the National Children’s’ Homes and Orphanage the Abingdon Young Leaguers gave entertainment with stalls, side shows, and Xmas tree, at the Wesleyan Schoolroom, which was a financial success.

The Abingdon Town Council held a special meeting last week to decide If they should continue the building of 54 houses contracted for or only finish the ten which were partly built at the time the scheme was suspended. – The voting was for the continuance of building the ten houses only. Considerable discussion took place, as at the last municipal election the housing scheme was prominent factor. 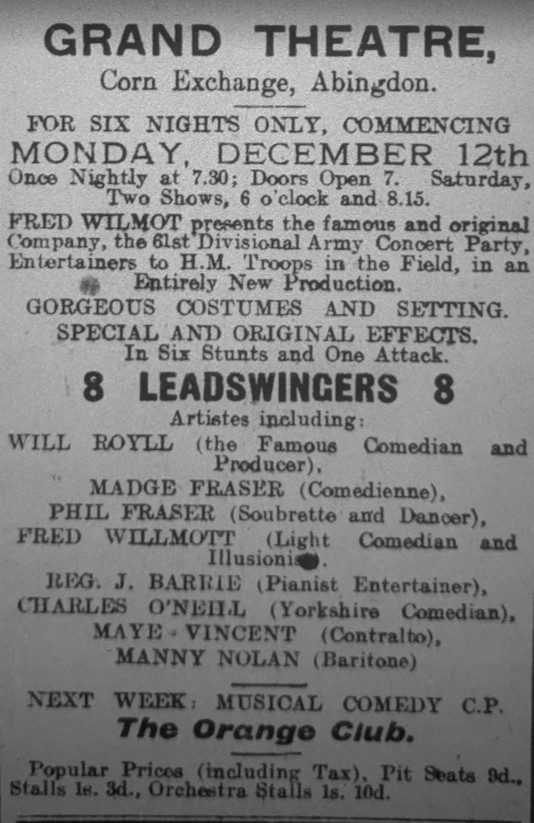 The local football on Saturday last included the replay of the match, in consequence of a draw, between Abingdon Town and Slough Trading Co., which was played on the Abingdon Ground. The match was for the Berks and Bucks Senior Cup. The teams were very evenly matched, and at half time the scores were even, viz., Slough one goal through Gunn, and Abingdon one through Ivey. In the second half it looked much like another even result, but Gunn through a pass gained another goal after which no other score was made, thus resulting in the visitors winning with 2 goals to 1.

On Monday last, William James Woodley, of the Causeway, Steventon, a packer in the employ of the G.W.R., met with instantaneous death by being knocked down by a passing train. It appears that the deceased was going home from his work along the up-line, and when near the Stock-lane Crossing stepped from one line on to the other in order to get out of the way of a passing train, and in doing so stepped in front the London and Bristol express, and was literally cut to pieces, some portions of the body being found a dozen yards away. A verdict of accidental death was recorded at the inquest.

At the Abingdon Borough Police Court on Tuesday the licenses for cinemas at the Corn Exchange and Stert Street Picture Palace were renewed.

Mr A.H. Roberts, for 17 years Relieving Officer for Abingdon Union, resigned the post in consequence of his serious illness. The Board at last Monday’s meeting expressed their deep regret at Mr Roberts’ resignation, which was accepted.

The return billiard matches between the Abingdon Y.M. Social Club and members of the Abingdon Police came off on Wednesday evening, when the Club won again with one match to the good, and a score of 877 against 675. Eight games were played.

The Y.M.C.A, annual meeting was held on Thursday evening last, at the rooms, when Sir George Dashwood of The Warren, Abingdon, took the chair. The Secretary (Mr W. H. Bourne) read his report, in which he stated that the year’s work had been a great success.

A lecture on Buddhism was given in the Abingdon Wesleyan Schoolroom on Wednesday evening in last week, by Mr A. H. Nathanielsz, son of a native Wesleyan Minister at Ceylon.

The new oak choir stalls at St. Michael’s Church, Abingdon, as a jubilee memorial of the Church is to be commenced, being a design of Mr F. F. Howard, of Oxford. 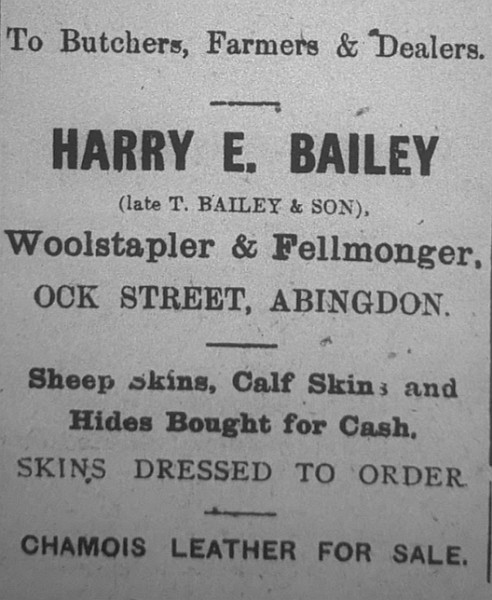 The annual meeting the Abingdon Branch of the National Farmers’ Union was held Wednesday evening at the Lion Hotel, Abingdon, when Mr H, Pullen, presided. The secretary (Mr Allison), reported a successful year and an increase of membership, whilst the financial position showed a balance in hand of £36. The membership of the Branch now is 120.

On Monday last the annual fat stock show was held in Abingdon market, which was attended by a large number of farmers and buyers as well as the general public. There were four classes for fat beasts, in which the following took first prizes —For fat steer, Mr Frost, Brightwell; fat maiden heifer, Lord Wittenham; pair of butcher’s beasts. Messrs Cornish and Sons ; four butcher’s beasts. Sir Mortimer Singer. The prices realised were from £43s to £50 10s. The first prize winners in the sheep classes were Sir Mortimer Singer. Lord Ebury gained first prize for a pair of fat pigs. In the cottagers’ classes for fat hog and pair of fat porkers, Mr F. Atkins and Mr A. Prew were the respective first prize winners. 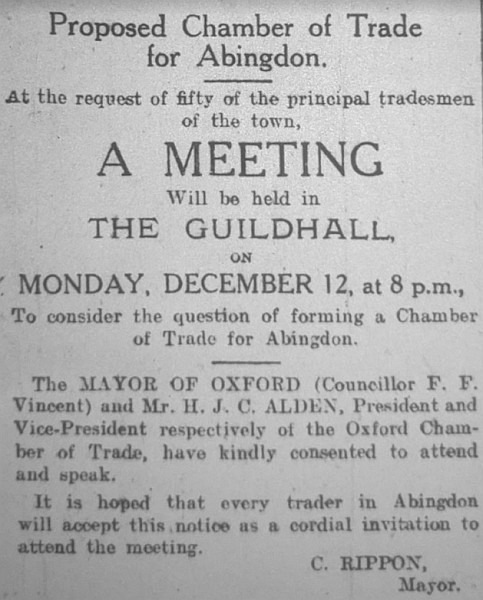 Abingdon tradesmen have formed a Chamber of Trade for the Borough. and appointed a preliminary Committee to prepare a scheme.

At the Abingdon Baptist Schoolroom on Wednesday evening in last week there was a large attendance to witness a Missionary demonstration entitled ‘Doubts Dispelled’, which had been prepared by Mrs J. F. Morris. The costumes of the different countries were lent by the Baptist Missionary Association. The object was to raise funds for medical work in India.

The usual festival Christmas services were held at the Abingdon Churches, conducted by the parochial clergy. The decorations were of the usual appropriate character.

The annual concert was held in the Roysse School in the gymnasium prior to the breaking up for the Christmas holidays, when a large number of parents and friends, were present. The programme was excellent, and the conductor was Miss Sheldon Peach.

Christmas at the Abingdon Poor Law Institution was kept in a very enjoyable way for the inmates. The fare for the inmates consisted of roast beef and pork, vegetables, plum pudding, mince pies, beer and minerals. In the afternoon they were regaled with oranges, nuts, sweets, biscuits and crackers. After tea, songs were indulged in and a pleasant day was spent, ending at 8.30 p.m.

In Abingdon, by Thames’s side,
Are Holy Churches three –
Michael’s Church and Nicolas Church,
And St. Helen’s on the quay.

Where, oh where, shall we find the Child,
And where will the Little One be?
At Michael’s Church or Nicolas Church,
Or St. Helen’s on the quay.

Michael, have you hidden Him
Behind your folded wings?
Good St. Nicolas, have you seen
The King of Kings?

Or does a woman cradle Him
And hush Him on her knee?
Is the Little Mighty One
With St. Helen’s on the quay?

Christian people search no more …
He once was laid in stall,
And Christus natus hodie *
In the faithful hearts of all.

Brought to you with help from: Thomas Leach, The Corn Exchange, Harry E Bailey, and The Mayor C.Rippon. The Abingdon Carol is from the North Berks Herald.