3rd September
The beautiful home of Mrs Bailie, Caldecott House, has been let until next spring to Sir John and Lady Mildred FitzGerald.

The Abingdon contingent of the Berks Yeomanry go into training with the Regiment at Churn from Saturday, Sept, 10th, till the 22nd. An excellent sports and entertainments programme has been provided.

The trading receipts of the Abingdon Branch the Oxford Co-Operative Society for the past half year has boon published as £5,626, as against £4,852 for the corresponding period last year.

The Abingdon Pavlova Leather Factory Athletic Club held their third annual sports meeting on Saturday last, in a field near the Factory. The Pavlova Band was in attendance, and there were several side-shows, dancing, &c.

The Abingdon water supply to the town is being seriously considered by the Town Council, who have engaged an expert to prepare a report on the matter. The present supply is obtained from a reservoir at Wootton, and supplemented by pumping into the mains water from the well in the centre of the town.

10th September
At the Abingdon County Bench on Monday, Percival Southern, farmer, of Kingston Bagpuize, was summoned by Jessie Waterman for an assault. It appears that the woman was gathering blackberries and mushrooms in the defendant’s field and he took them away from her and flung her to the ground. There was a cross summons issued by the defendant against the woman, who, he said, scratched his face when he stopped her. The Bench fined the defendant £2, and dismissed the cross summons.

The census returns for the Borough of Abingdon show the inhabitants to number 7,167. an increase of 358, but at the taking of the census the various schools boarders were in residence. The males numbered 3,271, and females 3,896.

The Reading Ladies’ Football Club met the Reading Ladies’ Sports’ Club on the Abingdon Town ground Saturday in a match in aid of local charities. The Ladies’ Club were victors by 3 goals to 2. The players wore knickers and jerseys and football boots.

17th September
The unveiling of the Abingdon War Memorial took place on Sunday afternoon last, when Lord Abingdon performed the act of unveiling. The Memorial is a tomb shape, with the names of the fallen on three sides and on the other side a brass plate with the portrait of a soldier engraved. The Mayor and Corporation attended, and addresses were given by the Mayor and Lieut-General R. J Clarke, a member of an old Abingdon family, and at one time Mayor of Abingdon. Prayers were offered by the Vicar, and the Congregational Minister read portions of Scripture. The hymns sung were ‘All people that on earth do dwell,’ and ‘O God, our help in ages past,’ The Town and Salvation Army Bands accompanied. The ceremony closed with the sounding of the ‘Last Post,’ and ‘Reveille,’ and the first verse of the National Anthem was sung. Many floral tributes were placed around the statue. The Territorials provided a Guard of Honour, and a detachment of the Berks Yeomanry and also of the Boy Scouts were present.

The Abingdon Corporation employees had an outing on Saturday week to Southampton by charabanc. The party started at 7 a.m, and several pleasant hours were spent in the town, the outing altogether being very enjoyable.

The Abingdon Licensing Magistrates, who have granted to certain houses extension of hours on market days until Sept 27th are making an application to the Home Office for an alteration of the opening hours on market day, the hours suggested being 11.30 – 4.30 and 7 to 10. It is stated that the Magistrates are opposed to the keeping open of licensed houses later than 10 p.m, and suggest that the ordinary hours should 10.30 – 2.30 and 6 to 10.

24th September
The War Memorial which, as reported last week, was unveiled by the Earl of Abingdon, is described as a monumental structure, in height of 14ft, with a base of 5ft by 6ft, and is in the Roman Doric style. The steps and column are in blue-grey Pennant Stone, and the remainder in Portland stone. One panel is a figure of a soldier with bowed bead, and arms reversed, and the sides bear the names of 228 men who fell in the war. Other portions bear carved laurel wreaths, the Borough Arms, and also the following inscription: ‘This memorial is raised by the people of Abingdon to the men of this town who gave their lives that others might live in freedom and peace.’ The date of erection and the name of the Mayor is inscribed on the base.

The prices at Abingdon market on Monday last were very steady, but the supplies were good. About 60 store and fat beasts changed hands, also nearly 100 calves. Fat sheep and lambs numbered 147, and the pigs penned numbered close on 200. 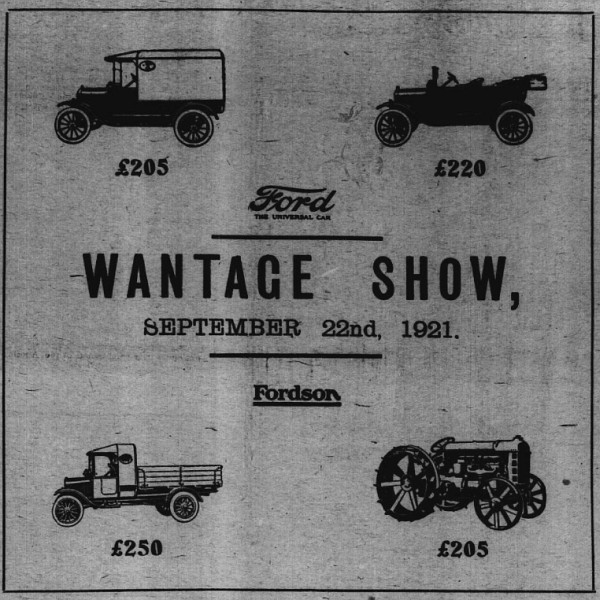 30th September
At the Borough Police Court on Tuesday, Alfred James Butcher, ?at mender, of no fixed abode, was charged with being drunk and disorderly in Stert Street on Wednesday last week. The police said that the prisoner was singing and shouting to the annoyance of passers-by. Prisoner said some friends had given him a drink. He was sentenced to seven days’ hard labour.

Morris Fitzgerald Ledward, of 46, Bath Street, Abingdon, pleaded guilty to removing a dog out of the borough of Henley without a licence on September 6th, and was fined £1

Maria Stone, No. 4. Court 3, West St. Helen’s Street, Abingdon, was fined 1s for allowing her chimney to be on fire on September 16th. The Mayor paid the fine.

Lizzie Bennett, 22, The Abbey, Abingdon, was charged with stealing a quantity of pipes, tobacco, and cigarettes, the property of William Hathaway, tobacconist, Abingdon. Defendant pleaded guilty and was fined 50s.

Thank you for the extracts to the Faringdon Advertiser and Vale of the White Horse Gazette on the British Newspaper Archive. Adverts came from the same newspaper where Heelas, Ford, and Punch have regular picture adverts. The picture of the unveiling of the War Memorial came from my scrap book, and The Earl of Abingdon is from the Tatler.