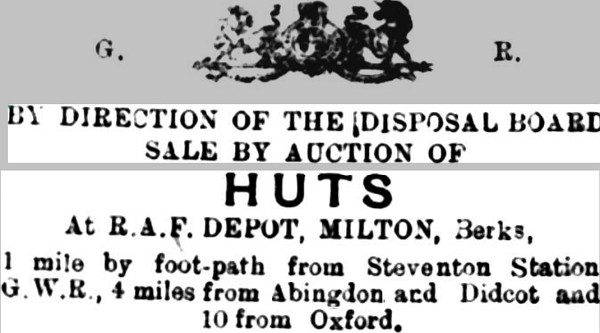 The Abingdon Comrades of the Great War have received a grant from the United Service Fund for the promotion of indoor and outdoor recreation, and a sum of £89 now in hand.

On Saturday the Abingdon Town Cricket Club lost to the Abingdon Grammar School, the scores being School 122, Town 84. Two excellent catches at long off were made by Smeeth, and Eason, Bevan and MacFarlane scored 34, 29 and 22 respectively, while Bradfield for the town batted extremely well, fixing up a score of 44.

From the proceeds of the North Berks Charity Cup Competition the sum of £3 3s has been given to the Abingdon Cottage Hospital; £2 2s to the Abingdon Sanitorium; £1 11s 6d to Didcot and East Hagbourne Nursing Associations, besides donations to other charities.

The Abingdon Bowling Club on Thursday met the Wantage Club on the Abingdon Park Green, Abingdon winning with an aggregate of 83 against 70.

The Board of Guardians of the Union (workhouse) last week accepted the tenders of Messrs Goodley Exors, for bread at 10d the 4lb, loaf, and 35s per 140 lbs. of flour.

The Abingdon Gas Company are fixing the street lamps with inverted burners free of cost to the Corporation.
11th June 1921 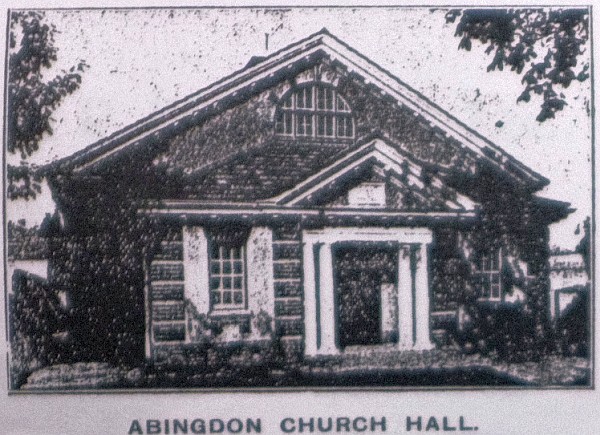 The work of erecting the Abingdon Church Hall is to be commenced forthwith as far as the funds in hand will admit, the sum now being £1,200.

At Abingdon Borough Court, before the Mayor and Councillor H. C. Clarke. — Frederick William May, farmer, and Vera May, both of Caldecot Farm, Abingdon, were each fined 7s 6d for riding cycles without lights in the Vineyard, Abingdon.

The Abingdon Bowling Club met East Oxford on the Park Green on Saturday last, and lost by 18 points.

A substantial cheque, subscribed for by churchpeople and others in the town towards defraying the expenses of the Vicar’s serious illness at the Ackland Home, Oxford, has been presented to him by the Churchwardens. The Vicar in acknowledging the gift says, ‘There will, I know, be some interval before I am able to minister in the parish again.’

A memorial tablet has been placed in St. Helen’s Church, and dedicated after morning service, in memory of the late Major General Bailie, of Caldecott House, Abingdon, and his son, Major Douglas Bailie, who was killed in the War.

The Abingdon Branch of the Mothers’ Union were unable to hold their intended meeting at Clock House, Abingdon, on Wednesday last week, in consequence of unpropitious weather, and the meeting was therefore held in the Church Rooms, where lady Dashwood presided and Mrs d’Almaine gave an address.

The committee of the Abingdon and District celebration of Alexandra Day are arranging a very interesting programme of events for the day’s celebration at Abingdon on Saturday, June 11th. 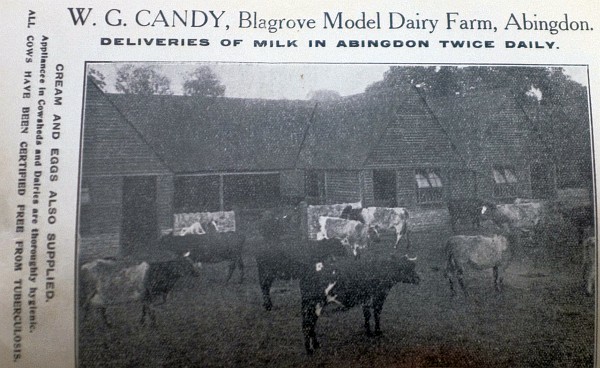 At the Cattle Market, on Monday last, the price per cwt. for fat beasts was an average of £5. The supplies of sheep included 194 fat and store sheep. Pigs were somewhat scarcer, 68, mostly stores, being penned.

The house-to-house collection for the month of May in Abingdon for the Radcliffe Infirmary and Abingdon Community Hospital amounted to £48 14s 6d.

The fete recently held in aid of the Abingdon Girl’s Club, in Stratton House Grounds, realised over £100.

A serious accident befell a school boy named William Mercer, aged 7 years, attending the Roman Catholic School in Abingdon. He was running down a bank on the side of the road when a motor car was passing, and he ran into the car, and was struck with the right wing of the car. The lad sustained concussion and a fractured leg and was taken to the Cottage Hospital.
25th June 1921 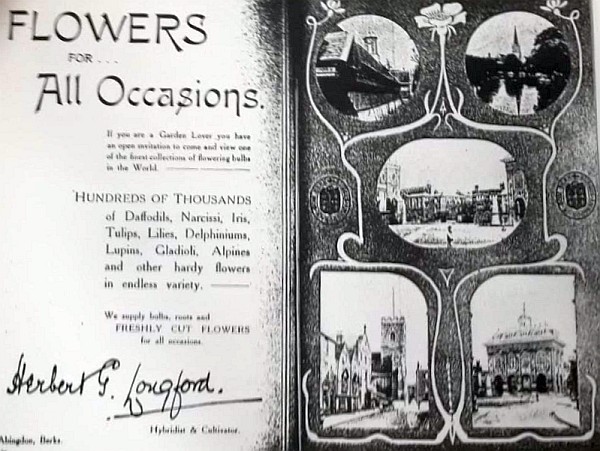 Abingdon June Fair was held in the Market Place Monday last, when there was a fair amount of the usual paraphernalia. In the evening the fair was crowded, and was kept going till 11 p.m.

The retirement has just taken place of Mr Shem Main, who for many years has been the guard on the passenger service of the Abingdon Branch of the G.W.R, He has been in the Company’s service for 47 years, entering it at Bristol as porter in 1874, afterwards going to Devizes, etc, coming to Abingdon about 20 years ago. He has the best wishes of his fellow servants and many friends.

In a gents’ doubles at tennis last Thursday, between the newly formed Crescent Club, using the Park Courts, and the Pavlova Club the former were the victors by 60 to 48.

The first Y.M.C.A annual sports and fete took place last Saturday at Dunmore Meadow, Wootton Road, when the attendance was very large. The Great Western Swindon Band was judged by all as giving a most excellent programme of music. Dancing was under the M.C. Mr F.B. Rowlinson. The weather, though cloudy, kept fine, and the gate receipts amounted to £50. A guessing the cake competition brought in £3 11s 0d. The roundabouts and swings provided the junior element with entertainment. The challenge cup, given to the Athletics Club by the late Mr R. Cocks, was competed for, and won by P.R. Broad. Many of the competitors in the racing came from Oxford, Didcot Dept., and Wantage. 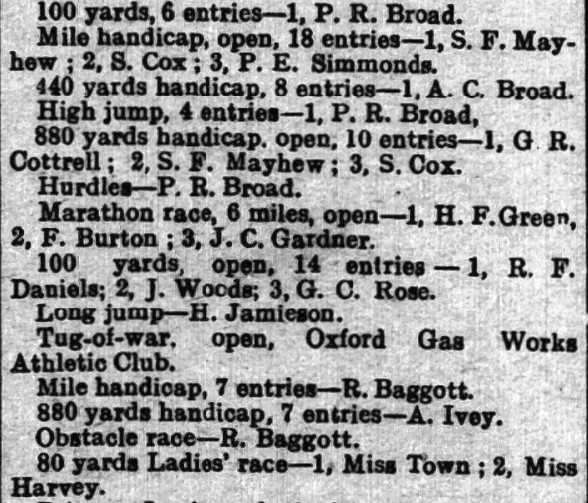 Princess Louise, who had been announced to perform the opening ceremony was unable to be present, and the Mayor (Councillor W.R Langford) undertook the duty.

Thank you for the extracts to the Faringdon Advertiser and Vale of the White Horse Gazette on the British Newspaper Archive. Pictures came from the Abingdon Directory from the 1920s.

P.S: A sitting of the Oxford Bankruptcy Court for Katharine Fanny Frost who carried on business at 20 Market Place, Abingdon, as ‘Helen Benson – Costumier and Milliner.’

Katharine said, ‘I set up in business in Abingdon with a capital of £1,000. I took the shop in Abingdon because I could not get one in Oxford, near which city I wished to be. I had had no experience of the business I opened in Abingdon, and did so on the assurance that there was a good opening there. I engaged a Miss Bennett to help me and she ran the business for a month, for which she received six months’ salary in advance, amounting to £117. Following a disagreement, I gave Miss Bennet £50, because I was afraid that Miss Bennett would take action against me.’

The Official Receiver said, ‘I think there is an expression in the correspondence with this manageress in which she says you have no capacity for business at all. That is about it, is it not’

The Official Receiver then said ‘You kept no books, and muddled the money away.’

Katharine said ‘ I drew on my capital from time to time, but did so in the hope that I would be able to earn money before it was all gone.’

Katharine said, ‘I knew I was losing, but I thought I should be able to make it again.’…