Thankyou to Margaret for this poem about Abingdon. In October I will produce a book called ‘Ten poems about Abingdon’ which will include ten poems selected and edited by a local published poet. 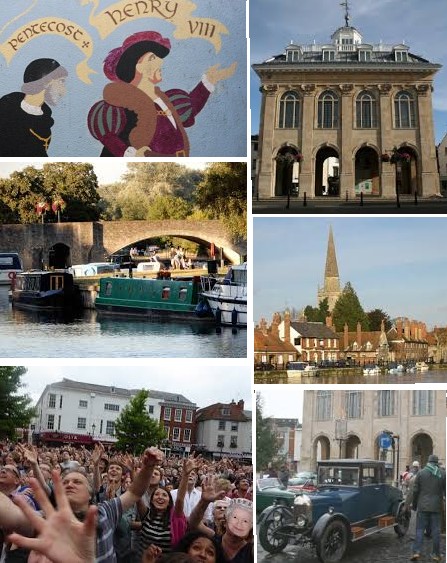 Abingdon, Oh Abingdon, what a lovely place to live,
You’ve seen so much and have so much to give.
You started as a crossing across the river Thames,
then the monks came along and chose the spot
to build their abbey, which gave the folk a lot
of work and commerce, stability and peace,
till Henry declared that all abbeys should cease.
Chaos ensued, but in their place
Churches were built, the Market came, life went on apace.
Streets and alleyways were erected up and down
till Abingdon was declared the County town.

The iconic County Hall was erected too
and things all around were bursting with life.
Factories were built with jobs for all comers
in winter, spring and through all summers.
Wars were fought, camps were built
with local men called to fight to the hilt,
then after the war Morris cars were built.

The river flowed on, pleasure boats were seen
and Abingdon people were always keen
to catch the Thrown Buns, a novel way we note
to celebrate events. And now when another
peril threatens our lives we all work together.
We help each other with shopping and chores
as most of us cannot go outdoors.
So live on, Abingdon, your history shows
that you survived all these years
and will continue to do so, despite all our fears.