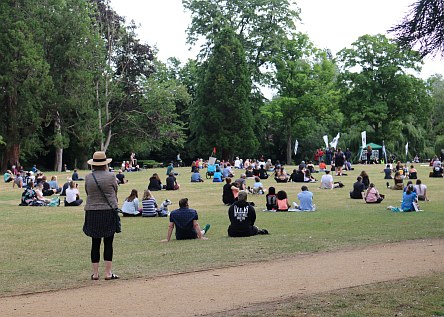 There was a demonstration in the Abbey Grounds this afternoon in support of the Black Lives Matter movement worldwide. People attending were given a leaflet with Protest Etiquette. They were also posters at the entry asking people to wear masks, and keep to the 2 metre rule.

The event was peaceful and well organised and involved a lot of speeches, poems, songs and some chants. At one point everybody took to one knee for a few minutes in memory of George Floyd, whose death under the knee of a police officer in the USA started this worldwide protest.

The experience of speaker after speaker involved having been treated unfairly because of skin colour. One speaker said All Lives Matter, and Black Lives Matter too. It is sad that we need reminding in 2020.