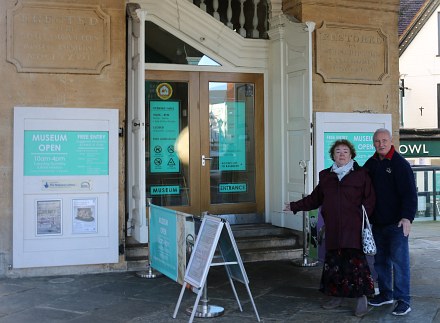 At Abingdon County Hall Museum there is a new temporary exhibition, made of artifacts from the museum collection,  called Mr Hemmings’ Hat & Other Curiosities. (running from 11th January to the 29th March 2020). 2020 is the centenary of the creation of the museum. 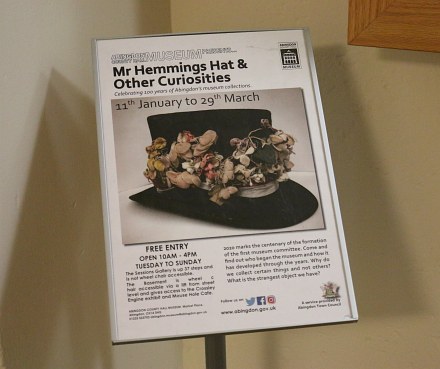 A display board at the exhibition tells of the history of the museum. Abingdon Town Council established a museum committee in February 1920 and the committee first met in March 1920. The earliest collection were Natural History for education. In the 1930s fossils, shells and corals still dominated with a few antiquities. Then about 1935 more antiquities arrived including stone weapons and tools, Roman coins, a model of St. Nicolas Church and some of the Saxon artifacts dug up in 1934 from the Saxton Road development. In the 1970s Mieneke Cox took over and deplored the lack of visitor numbers. People from the town might visit once and not come again. There were more tourists than town visitors in those days. She set about making the museum more interesting with displays and exhibitions to interest local people. There was another revamp in the 1990s and more recently a major refurbishment in 2012.

Among the curiosities on display are Mr Tom Hemmings’ Hat and his Morris Dancing jacket and leg bells. After his death his wife donated them to the museum in 1960. They are in a cabinet with a pair of shoes that had been thrown out into a skip with building rubble in East St Helen Street. Shoes discovered inside strange places in old buildings could have been put there by builders for good luck, or the family as a fertility aid. 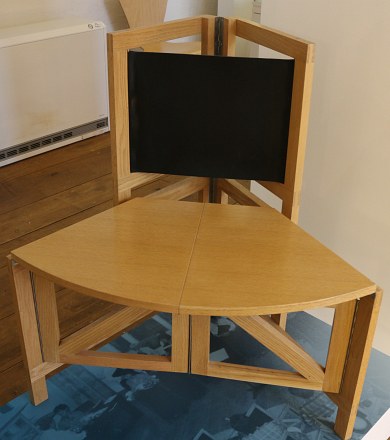 There is a Erik de Graaff chair – added to the museum as part of the 1994 refurbishment when it was decided that as well as exhibitions there would be concerts. These fold-up triangular-chairs were the resulting design. 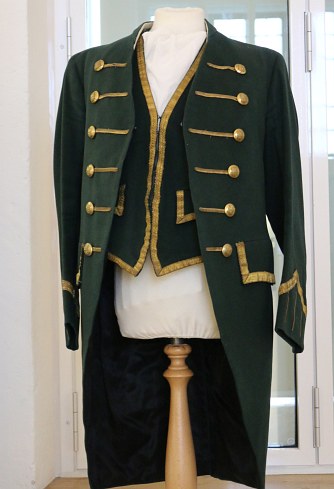 The Sergeant at Mace’s uniform is displayed; and a portrait of Sir Thomas Fleming, the judge who tried Guy Fawkes. He is not known to have any Abingdon connection so the curiosity is what is he doing there. There are also buns and china commemorating royal occasions, and some artifacts from the Abbey Lodge Free Masons. In another case are some dog collars from the 1700s – one belonging to Mr Morland’s dog.

Fossils still feature in the attic where you can see The Abingdon Fossil Collection. They date from around 153 million years ago when a warm sea covered the Abingdon area. They were preserved in the Kimmeridge clay. There you will find the Abingdon Ichthyosaurus. The oldest objects in the museum are the fossils. The newest exhibit could be the Geiger Counter from the Jet Project at Harwell.

The museum gets busier during half term and weekends. Tuesday in January can be quiet if there is not a school or coach party passing through. The staff were very friendly. There is one member of staff in the sessions hall on the first floor, and another in the attic to tell you about the exhibitions. 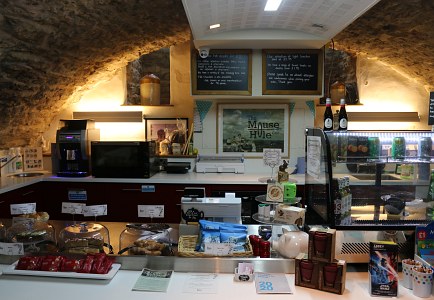 In the basement from 10 am to 2 pm, Tuesday to Saturday, you can visit The Mousehole Cafe. The name was originally used for the basement cafe when it was a popular teenage hangout from 1958. Back then teenagers drank coffee, and soft drinks – including hot orange squash in the winter. The coffee in those days was just coffee. Nowadays you can get Americano, Cafe latte, Cappuccino, Café Mocha etc. The new Mouse Hole cafe is warm on a Winter’s day and only £1 for a hot drink.