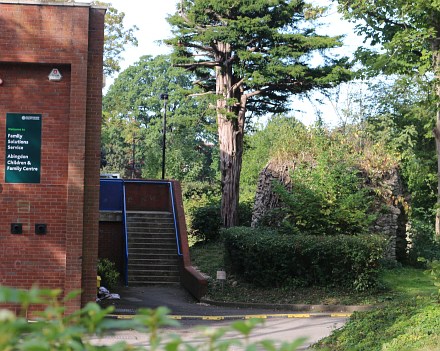 There is a folly in the grounds of the Abingdon Children and Family Centre at the Net off Stratton Way.

With the ivy cut back it can be seen from near the Stratton Way bus stops. When the Net was a youth centre the general public often went in for events put on by young people, and the stone cave, beside the modern red brick building, was an anomaly.

The folly entrance has a metal gate to stop anybody going inside. It looks like a hermit’s cell but I am told that it was built as a Victorian folly in the garden of Stratton House – now the other side of Stratton Way.