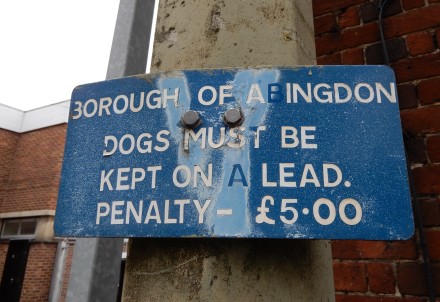 In 1956 a clause was added to the British Road Traffic Bill so that owners of dogs  allowed on a ‘designated road’ without a lead would be liable to a fine of up to £5. This sign, near the entrance of Sydenhams, shows that Ock Street in Abingdon was such a ‘designated road’. It must be the oldest dog sign in Abingdon and dates from before the Borough ceased to exist in 1974. Unless you know better.