There was a meeting of Abingdon Town Council this evening to consider reports from the council’s sub Committees, and agree next year’s budget. 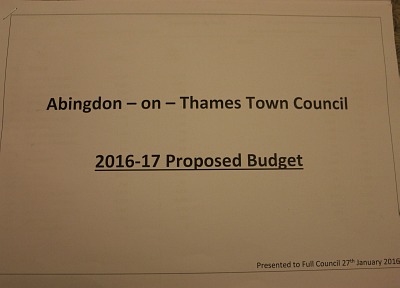 The meeting began with a prayer from Revd Charles Miller where he prayed among other things “Inspire the council with a right judgement in all things, and … a zeal for the common good.”

Councillors expressed concern about the mud on the road left be lorries leaving the Drayton Road building site, and the danger presented sometimes by lorries turning into the site. The Mayor undertook to write to the district council to express the town council’s concern.

There was then a heated debate about setting up a working group to consider the council’s future carbon cutting. Conservatives first suggested postponing the working group agreed at a previous town council. They then proposed it be set up under Widdecombe rules so that the ruling Conservative party have 3 members, and the opposition Lib-Dems 2. This left the independent Angela Lawrence out in the cold. But the Widdecombe rules were voted through by all the Conservatives; all the Lib-Dems abstained, and only Angela voted against. She appeared to be the one most passionate about making things happen in this working group.

A decision was made to allow a 2nd monthly Farmer’s Market. There was also a discussion of Market fees. On this occasion it was Conservative Councillor Vicky Jenkins who was a lone voice. She said that the town council was subsidising the Farmer’s Market whose rents were 38% less. Both Markets should be treated the same.

Other committee papers were all agreed including those on the Guildhall which I will return to soon. 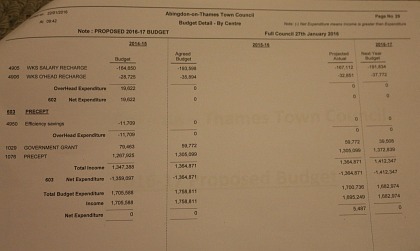 There followed a party political discussion on the budget. The Lib-Dems proposed some amendments to the budget. These included adding £60K to the Community fund to help save Abingdon’s Children’s Centres, and £30K not £10K towards pushing ahead with the Neighbourhood Plan. To pay for these changes they wanted efficiency savings, charging more for some council services, and not putting quite so much towards the future cemetery fund, or buying additional Christmas lights.

In the end this amendment was voted down largely on party lines with Angela Lawrence the independent and another councillor choosing to abstain. The main Conservative argument was that the Lib-Dems should have thought of these ideas earlier and got it properly discussed through committees beforehand.

But it did produce a good lively debate. When everything is agreed beforehand town council meetings can be as dull as next year’s budget sheets.