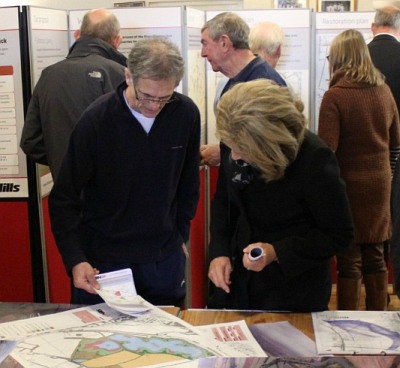 Thanks to Gordon for this. There was a public exhibition yesterday at Abingdon Vale Cricket Club for a proposed sand and gravel quarry on farmland between the River Thames and the A415.

The entrance would be opposite the Culham Science Park.

A larger scheme for the same site was opposed by residents, and opposed by English Heritage who did not want the bronze age cemetery at Fullamoor Farm to be destroyed. And so the proposed quarry area has been reduced in size, and traffic across the Culham and Clifton Hampden bridges removed.

Gordon says “The transport page is interesting – ‘level of additional traffic insignificant’, ‘no perceptible increase in queueing or delay’. The map seems to indicate the route to the A34 through Abingdon town centre”

“It was stated that 40% of the traffic would go through Abingdon throughout each working day, amounting to 4 trucks every working hour.”

He just wanted to bring this to people’s attention. A planning application will be going to Oxfordshire County Council early in 2016. The consultation can be found at fullamoorquarry.co.uk