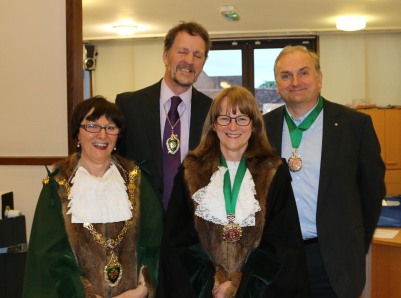 Angela Lawrence was elected as the Mayor of Abingdon this evening at a crowded Guildhall, and Helen Pighills was elected her Deputy.

Angela is the first “Independent” to become Mayor of Abingdon since 1982 (when Brian Jones was Mayor). She said “It is such a thrill and honour to be elected Mayor of our lovely town.”

Samantha Bowring, the outgoing Mayor, described the many and varied Abingdon people and societies she had met during her year as Mayor, and described Abingdon as a brilliant cool town.

Four organisations and people received Mayors awards from the the outgoing Mayor: 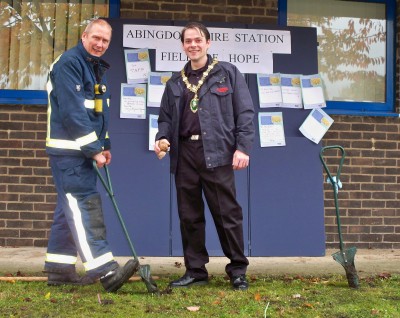 Back in November daffodil bulbs were planted to remember a former colleague of the firemen – a welshman – hence the daffs – who had recently lost his battle against cancer. 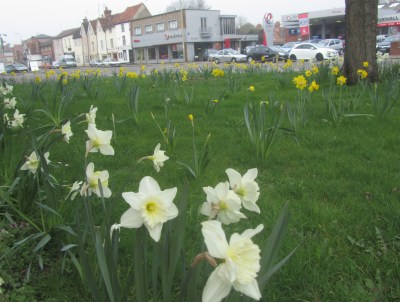 The idea then blossomed into making it a “Field of Hope” ,asking everyone who has been touched by cancer to be involved. 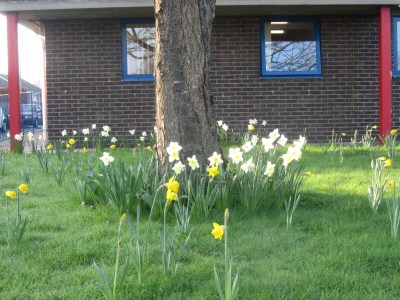 They did not come all at once as happens in some of the town’s daffodil displays. The ones round the tree and at the back came first. Those in open ground followed a week or so after, but now all are in bloom. 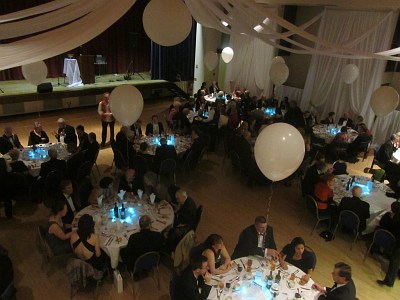 Last night was the Mayor’s Charity Ball. The Abbey Hall was transformed by drapes and balloons. There was a lot going on for the £45 ticket price. During the meal there was music by a string quartet from Abingdon School.  A charity auction followed. 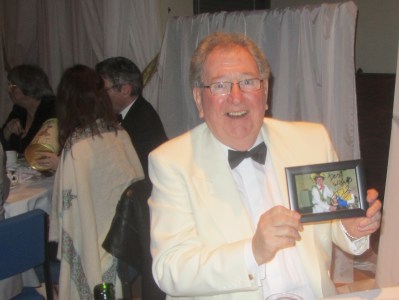 There was a back to front raffle where everybody was given a prize and then asked for money and given a gift aid form. One raffle prize was a signed picture of the Mayor in Morris Dancer’s dress which is likely to be auctioned by the winner on Ebay to make more dosh for the Mayor’s Charities: Abingdon Bridge and The Fire Fighter’s Charity. 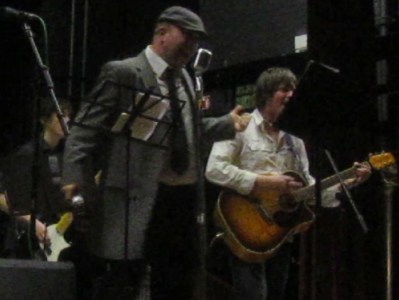 There was also entertainment by Kevin Tomlinson,  and then music by Full Circle.   Congratulations to those who gave their services for free and helped raise so much money.

Thanks to the Mayor for this report … 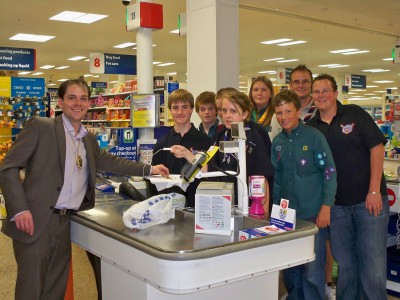 “36 young people from Oxfordshire will be attending the 22nd World Jamboree in Sweden next summer. Jamboree’s are huge camps with Scouts attending from nearly every country on earth. Lord Baden Powell intended them to foster good relations between countries and promote peace. They’re great fun and they can change young peoples lives, I know, I attended one in Korea in 1991. Today they have been packing bags at tesco in return for small change. If you’d like to help you can also become a Jamboree mate. For a donation of £10 you will be informed of the contingent progress and even get a post card from Sweden.