Thanks to the Royal Mint for the new £1 coin. With the old £1 coin there was often the worry it could be a fake.

In Abingdon it was a couple of weeks, after the introduction, until we got any of the new coins. 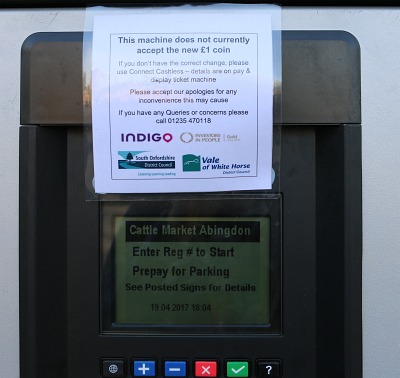 Not all the machines are ready in time. The leader of the Vale of White Horse District Council was seen in front of one of the parking machines saying that it would not take the new coin yet. 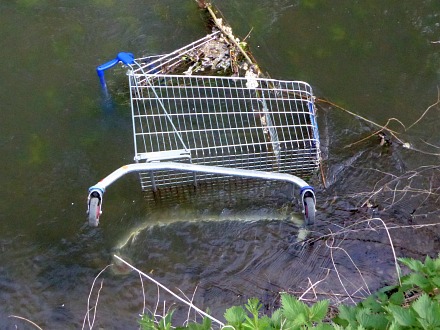 Tesco took the decision to unlock all their trolleys until they could be adapted to the new coin. I did see one trolley in the River Ock. There must have been more. 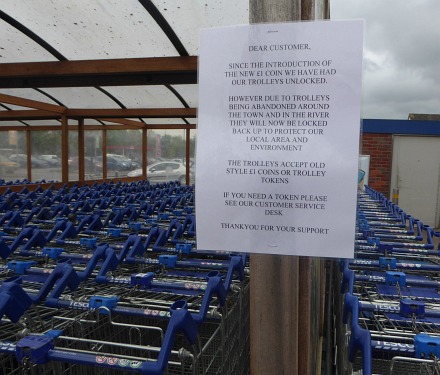 Now a notice says “… due to trolleys being abandoned around the town and in the river, they will now be locked back up to protect the local area and environment. The trolleys accept old style £1 coins or trolley tokens …” 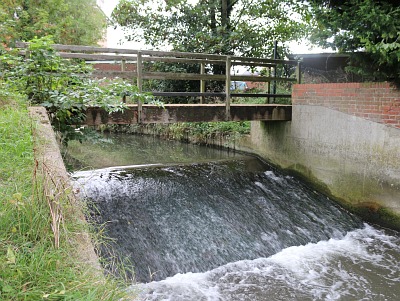 Running alongside Ock Street, the River Ock has two branches. 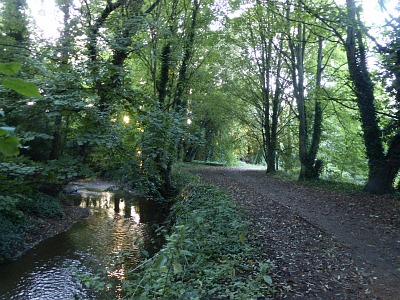 Between them lies a favorite walk of locals. It runs from St Helen’s Court in the town centre to Drayton Road. 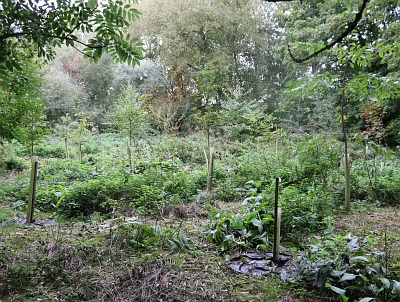 The path is out of site of the houses because of the cover of trees. There are crack willows beside the water, and Abingdon Green Gym have planted new trees in an area between the main path and a smaller path following the upper river. 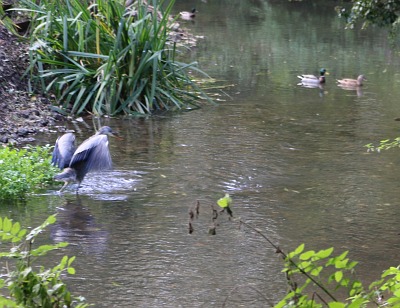 It is a place of natural beauty where wildlife can be seen. On Sunday we saw by chance a heron in action. Normally we just see herons standing waiting in the water, but this one was going for the kill. 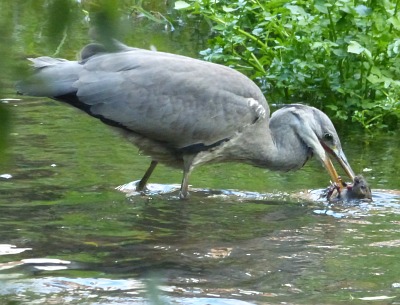 It caught what I fear was a water vole. An expert might know better. 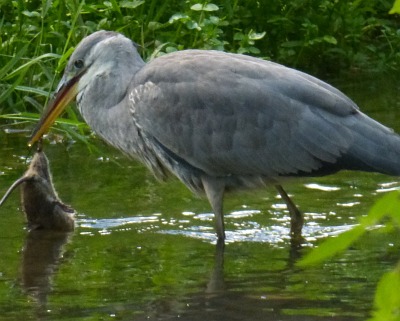 The heron then fought and dunked its victim repeatedly in the water. I hope it was a rat, but I fear it was a water vole. 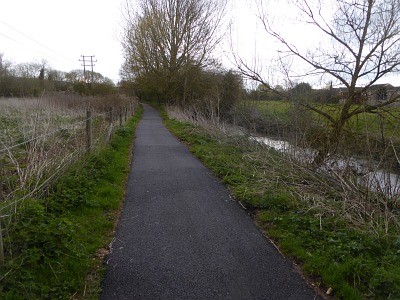 One of the longest running complaints of the Tithe Farm and Ladygrove Residents association was remedied last week. Instead of a muddy uneven path beside the River Ock between Chaunterell Way and Tesco there is now a tarmac path. 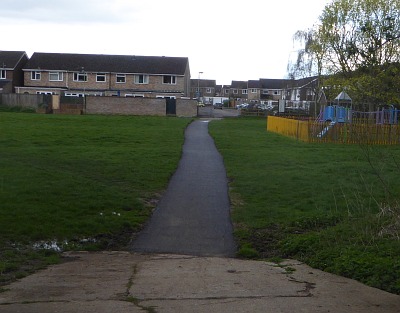 The work has been done by the Vale of the White Horse District Council. 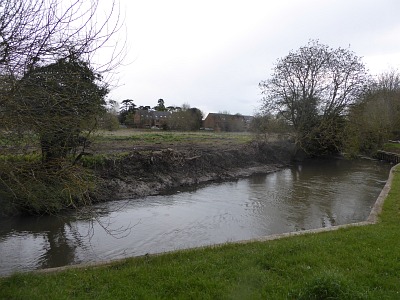 In the same area, alongside the Ladygrove Meadow, the Environment Agency has been clearing trees, and dredging the River Ock. I have not heard any official word about dredging but there was a large pile of mud a month ago that is now gone. This area did see flooding in 2007. 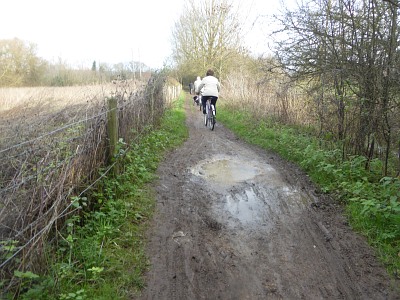 The pathway connecting the Ladygrove Estate, in South Abingdon, with Tesco has long been an issue. It gets very muddy, and at times is flooded by the River Ock. 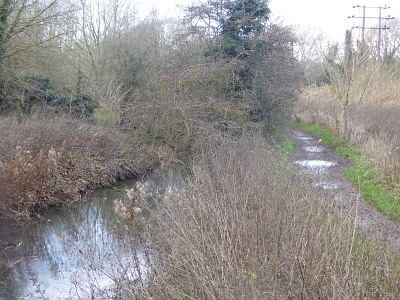 A few years ago the Tithe Farm and Ladygrove Residents Association tried to see if Tesco would help fund improvements to the path. Nothing came of that suggestion, and I see on the TFLRA blog that they have not had much luck with the Vale of White Horse Distrct Council earlier this month … “Last time we said that the Vale Property team were inspecting the state of the footpath from Ladygrove to Tesco’s. Afterwards, they said that they thought it wasn’t in too bad a state and that a few dips and ruts were to be expected.“ 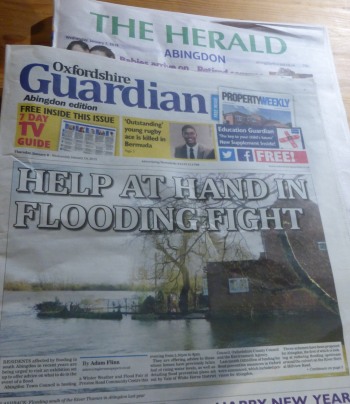 A flood and bad weather fair was put on by the Town Council at both Long Furlong  and Preston Road Community Centre. 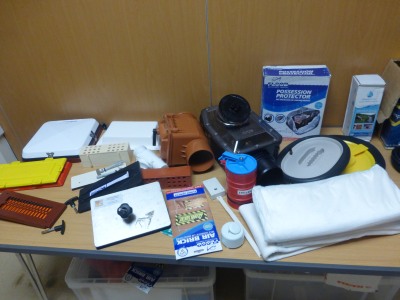 There was an array of ingenious gadgets designed to protect homes and possessions from floods.

There was the chance to pick up leaflets about what to do in the event of a flood, or other types of bad weather. 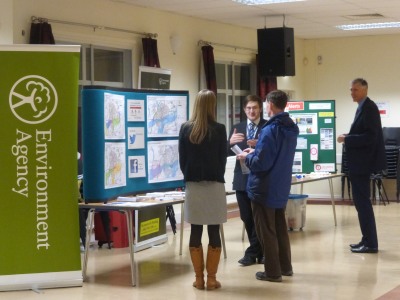 The Environment Agency were also there to explain more about the three flood mitigation schemes being looked at for Abingdon.

Central government is now putting more money in to flood prevention, but expects more money from local partners in return.

Feasibility studies have already been done on the two simpler Abingdon schemes: to reduce flooding from the River Stert, and the River Ock at St Helens Mill. They could get the go ahead for design in Spring 2015.

During 2015 data would also be gathered to model the River Thames (Sandford to south of Mapledurham) and the River Ock Storage Area.

A River Ock flood storage area is the long term flood prevention proposed for Abingdon. It would hold back water outside Abingdon and release it more slowly.

Modelling would first show whether a flood storage area on the River Ock is viable. If viable then a feasibility study could begin in 2016.

The River Ock scheme will be looked at separately from the Oxford scheme, and for either scheme to go ahead they must demonstrate they will not make flooding worse downstream.