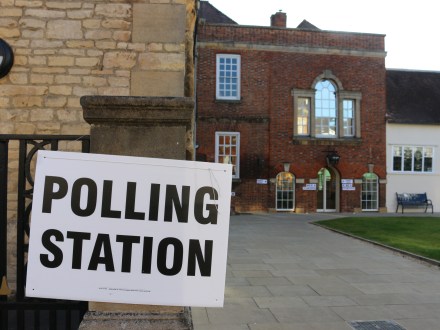 Polling stations are open between 7am and 10pm on 2nd May. People can find out who they can vote for and where they need to go to cast their ballot by entering their postcode at whitehorsedc.gov.uk/candidates. 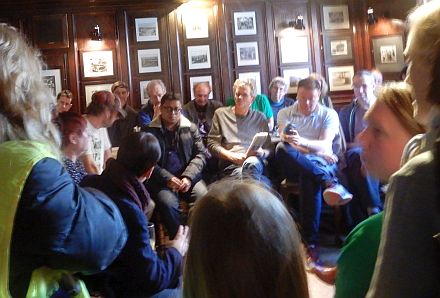 Caroline Lucas, of the Green Party, was in Abingdon this lunchtime. She spoke to members of the Green party, and some other interested people, and answered questions in the back room of the Brewery Tap. 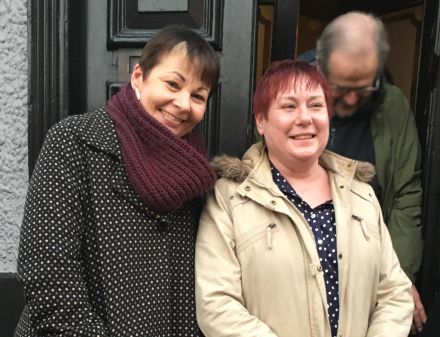 She is here to support the Green Party candidate for the Abbey Northcourt ward, Cheryl Briggs, in the upcoming local elections on Thursday May 2nd. That is when we, the voters of Abingdon, choose a new Abingdon-on-Thames Town Council, and a Vale of White Horse District Council.

Now is the time that people are thinking of putting their name forward to become a councillor to try to make a difference for Abingdon, and parties are looking for candidates. People can either be selected to stand by a political party, or stand as an Independent. The following link has an introduction on how to become a councillor.

The Abingdon wards are as follows : 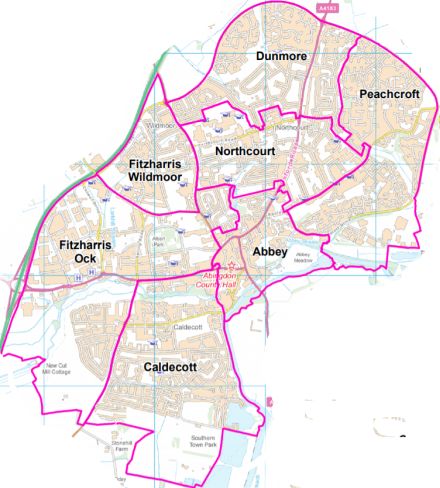 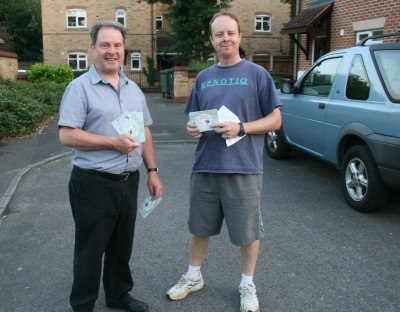 The Election of the Mayor of Ock Street will be on June 21st this year. Ballot Papers were being taken round this evening. It is earlier than usual to give people more warning, and also to avoid delivering ballot papers during the England v Uruguay game.

Only people living along Ock Street and side streets get to vote in this election. 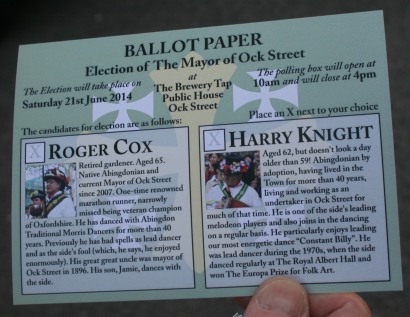 It will be a two way contest this year between Roger Cox, the current Mayor, and Harry Knight. 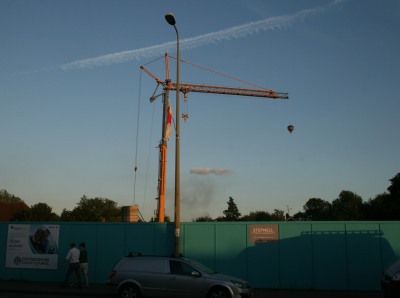 The number of Ock Street occupants entitled to vote has been reduced by the demolition of the Mayott House Old People’s Home.

But by 2015 the new independent living quarters, built instead, will provide new electors. 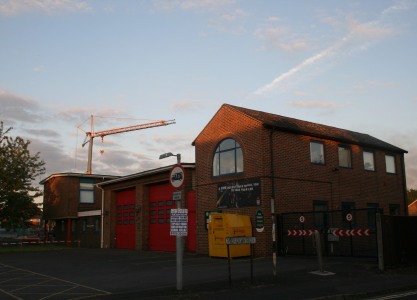 On Ock Street today the Firemen were on strike over government changes to their pensions. As I gather it the government wants firemen to continue front line fire fighting until the age of 60. 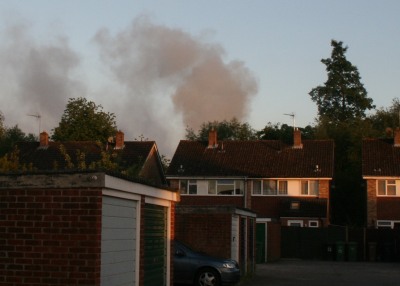 Large clouds of smoke were rising this evening. Not a strike breaker – just a large bonfire at St Amand Drive as viewed from Meadowside off Ock Street

Abingdon East has a fascinating contest for their next County Councillor this coming Election Thursday. But will you vote? 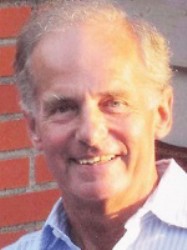 Count Nikolai Tolstoy is one of the candidates – representing UKIP (the UK Independence Party). UKIP are fielding candidate for the first time in every Abingdon ward. He currently lives in Southmoor a few miles outside Abingdon, but has Russian origins. 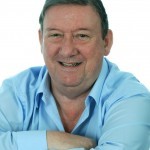 He will be up against Mike Badcock, former two time Mayor of Abingdon, representing the Conservative Party. Mike was instrumental in renaming Abingdon to Abingdon-on-Thames and instigating the bun throwing contest. 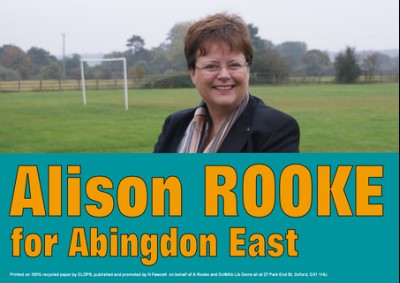 Alison Rooke, another former Mayor, is the Lib-Dem Party candidate. She helped lead a campaign while Mayor to save Abingdon Community hospital from closure, and after experience of looking after her dad suffering from dementia will do all she can to improve care services.

Julius Bullock is the Green Party Candidate for Abingdon East, and an engineer at the Rutherford Labs. His Bio says “He knows Abingdon East well and will take an engineer’s problem-solving approach to its problems of flooding, traffic and lack of affordable housing.” 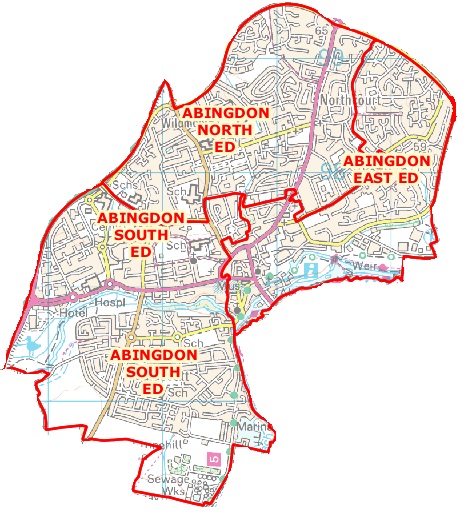 The new Abingdon South boundaries, redrawn in 2012, has confused people, particularly those living in the Fitzharris Estate. Up to now they never considered themselves to be Abingdon South but they are now. They too have an enthralling contest, but without a UKIP aristocrat, … 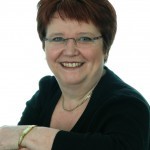 Marilyn Badcock, a former Mayor, and partner of Mike Badcock, is the Conservative Party Candidate. In her bio she says “Abingdon-on-Thames is a thriving community, and it is a privilege to serve as a town, district and county councillor, working for local people.” 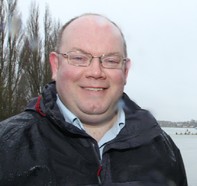 In the write up for Neil Fawcett, a former County Councillor, and candidate for the Lib-Dems, it says “As County Councillor he won major investment in Thameside and Caldecott Schools, helped put together the plan that led to the new Family Centre and got the classrooms that now house Riverside Pre-School on the Thameside site.” 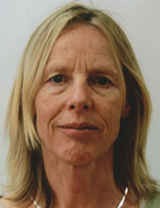 Carolyn Guillot, the Green candidate says “I feel Abingdon South needs development particularly in the area of schooling, traffic congestion and amenities for the young and protection from further housing development unless the above issues are resolved.” 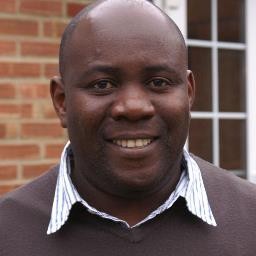 Chewe Munkonge ‏has been campaigning in Abingdon South for the Labour Party. A few weeks ago one person told me he was the first person they’d seen on the doorstep. Also saw him at a flood meeting. 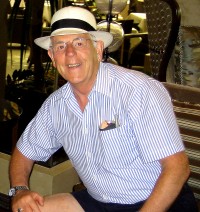 David Weaver is the UKIP candidate. He send me his profile. Here is an extract … “I was a Parish Councillor for 13yrs with Cholsey Parish Council, Deputy Chair for 2yrs and Chair for 3yrs.

Why UKIP? From my early teen’s I have believed that elected Members of Parliament and local Councillors are there to do the bidding of the
electorate, they are, the servants of the people. UKIP is unique in local government, because we do not ‘whip’ our councillors to follow party diktats, or toe the party line. Instead, we expect our councillors to represent the wishes of the electors at all times….” 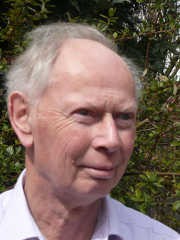 Chris Caddy is standing for the Greens. Chris has a rich portfolio. He was a senior manager at the Vale of White Horse District Council and since retiring has achieved much with various voluntary organisations.

Tom Fleming is standing for UKIP but I have found no information about him on the internet. 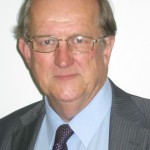 The Conservative Candidate is Sandy Lovatt, the current leader of the town council. He is a campaigner for small business. He says “The cost of running council services can and must be kept efficient without damaging essential services. The Conservatives have already proven that they deliver proper planning and value for money.” 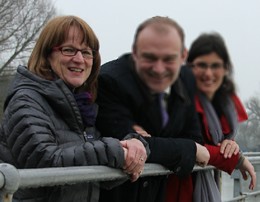 George Ryall is the Labour candidate.

The Oxford Mail did much better and got submissions from most candidates which were printed last week. I’ll update this if people point me at the info and send comments.