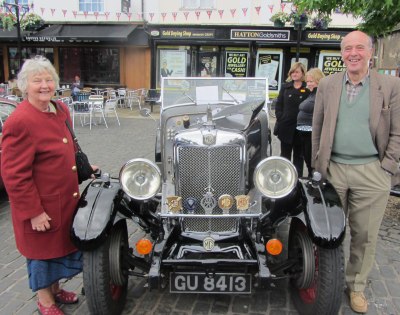 On the Market Place this morning, MGs, made in Abingdon, gathered. Although not the owners, I took this picture of Margaret and Alwyn Langsford, who happened to be passing. Margaret is very well known in the Church in Abingdon, and Alwyn on the Abingdon and District Music Society. 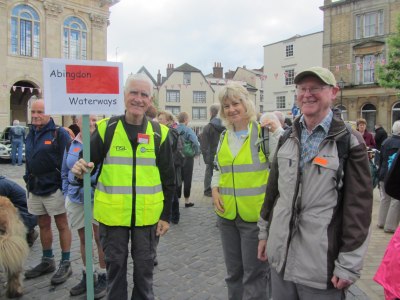 As well as MGs, a number of walks were setting off from the Market Place . These are the leaders of the longest walk round via Sutton Courtney, but there was also a green walk, and an Abbey walk. Throughout the day there were also tours of the County Hall but I will leave those pictures for a separate blog post. 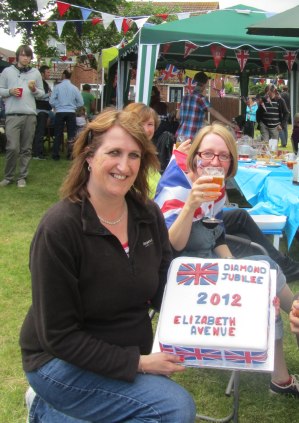 Street Parties carried on through out Abingdon. In Elizabeth Avenue, off Peachcroft Road, Alison had been the person that got all the neighbours to get together, some of them for the first time, for the Diamond Jubilee. 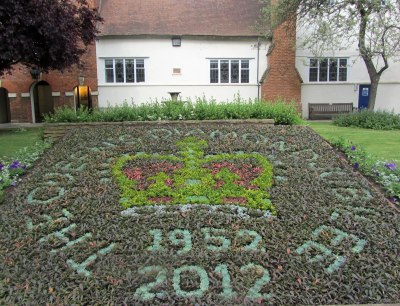 Of course this is all to celebrate Queen Elizabeth. The 1952 – 2012 floral tribute can be seen in front of the  Guildhall. 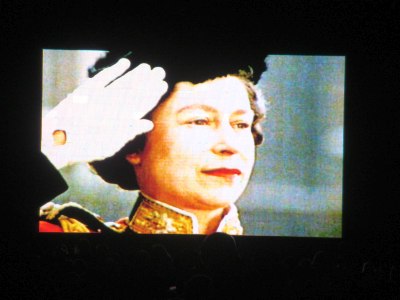 The Queen was to be seen on the large screen 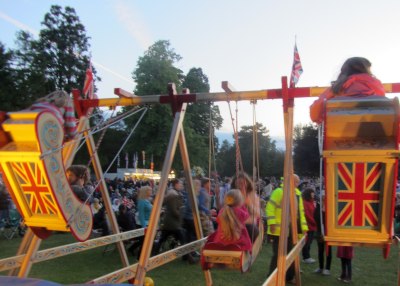 in the Abbey Grounds, and on many smaller screens throughout the town during this evenings Diamond Jubilee Concert, as we tuned in to the concert at Buckingham Palace.

This evening celebrations in Abingdon then continued with  the National Celebrations … 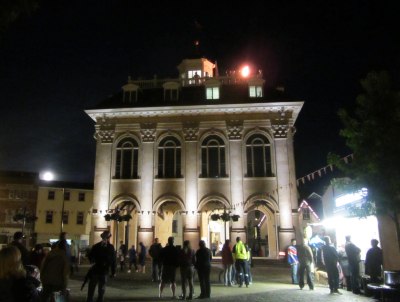 as a beacon was lit on the roof of the County Hall, and in many others places throughout the nation, and commonwealth. 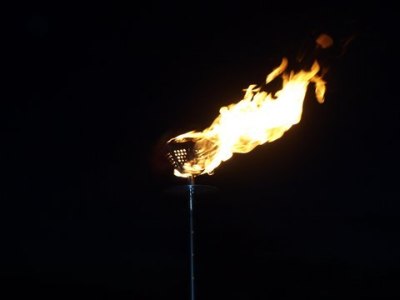 Thanks to Alice for this final picture of the beacon on the roof.

2,500 tickets were sold, and many more could have been sold, but after two drenchings at the Street party and the Bun Throwing, not everybody braved the final event. So here is a video of the finale. There were some very good bands, and a Last Night of the Proms Singalong led by Abingdon Town band and The Abingdon Operatic Society culminating in the fireworks and music shown in the video (apologies for sound quality at times). 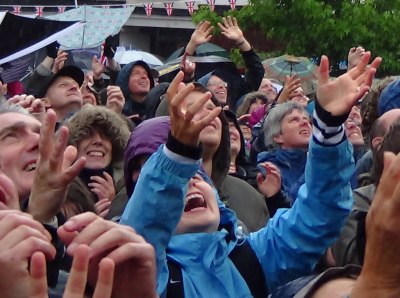 Despite the rain a very good crowd turned out for the Abingdon Bun Throwing to celebrate the Diamond Jubilee of Queen Elizabth II. 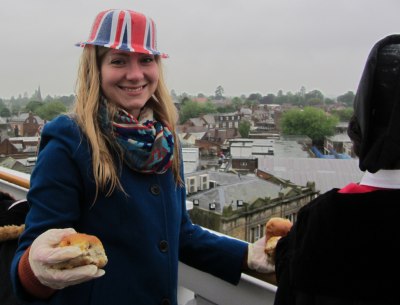 Among the Bun Throwers was the Local Member of Parliament for Abingdon, Nicola Blackwood. 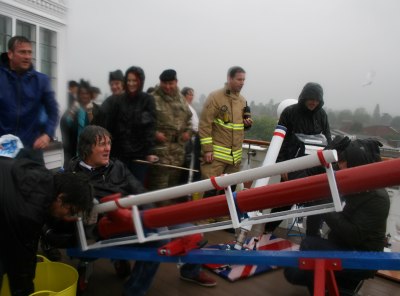 The BBC had sent along a team trying out various devices to throw buns. Some looked like catapults, and others were more like canons. 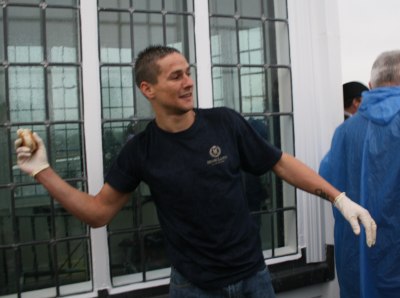 I’m not sure if any of them could beat the Abingdon People’s champion who won the recent World Bun Throwing Championship. Both the canon and he were getting bun far across the Market Place. 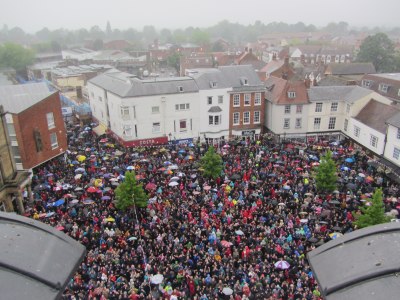 That is a long way as you can see here. 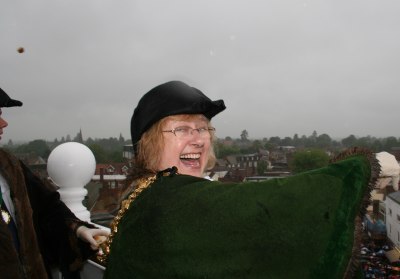 The Mayor of Abingdon 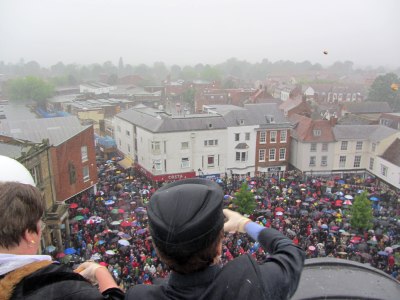 and twenty drenched councillors threw the majority of the 6000 buns, some specially marked with 60 to mark 60 years since The Queen’s Coronation, 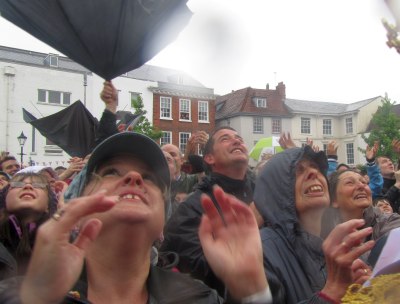 to the drenched people below. I hope you enjoyed the bun throwing. There was a magnificent turn out for such a rainy day.

Somebody did tell me that Sunday was expected to be a deluge and they were right. But everything went ahead on Jubilee Sunday and we saw some of the character that makes our country great.

Abingdon’s largest Jubilee Street Party went ahead. I hope they others managed as well. 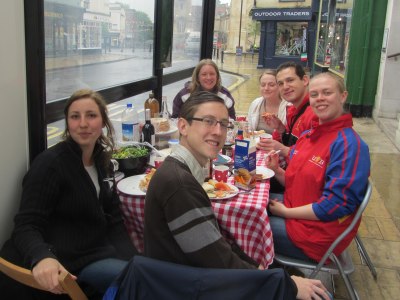 With no traffic coming along High Street the bus shelter made a good shelter for this group from Lombard Street. 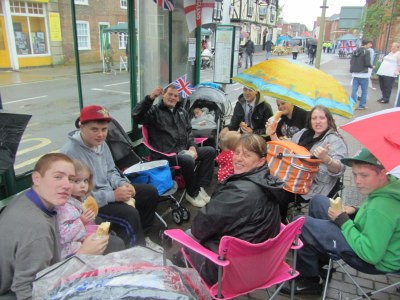 In fact all the bus shelters got well used. 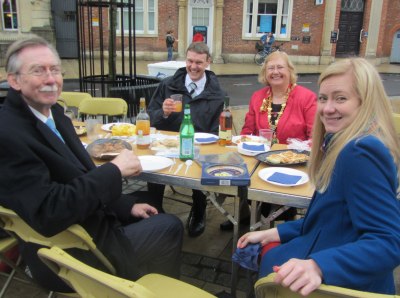 The dignatories had no such cover I’m afraid. The Mayor underwent three drenching during the day: at the Street Party, at the Bun Throw, and at the Prom in the Park. 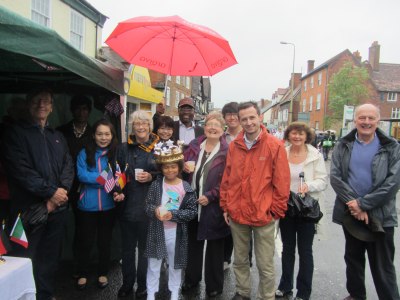 It was not just English people. This marque had people from several different countries, and they were letting people try their foods. 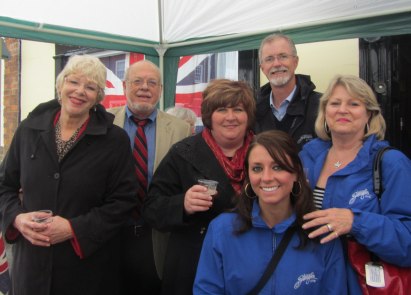 All of these people came over from Abingdon Virginia showing that all Abingdonians have what it takes. 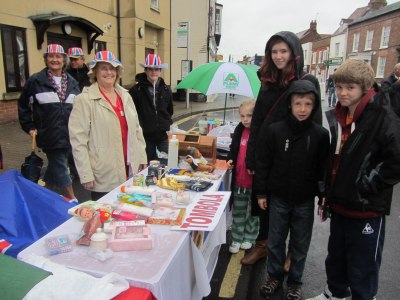 Some people had charity stalls, such as the Friends of Abingdon Community Hospital. 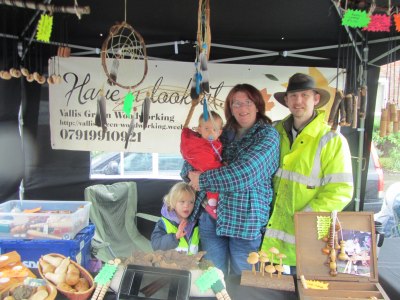 And although a number of trade stalls were booked I think only the one turned up. So they deserve a special mention. Wood Turning specialist Vallis Green. He will be back near Christmas. 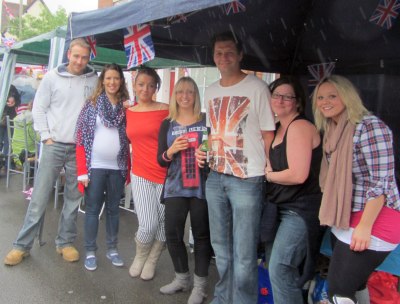 There were too many to mention who braved the rain and made a Jubilee party in the rain to celebrate the reign of Queen Elizabeth II.