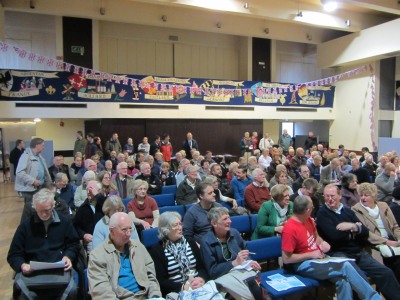 At 10 am yesterday, a public meeting in the Guildhall, Abingdon, allowed people to express their views on the proposed development of 160 houses in South Abingdon.

I estimate 150-160 people were in the room. No developer representative admitted to being present and the public who spoke were all against the proposal. The central problem for most people in the room was that there is already a lack of infrastructure (roads, schools, health care) in South Abingdon without adding 160 houses more. 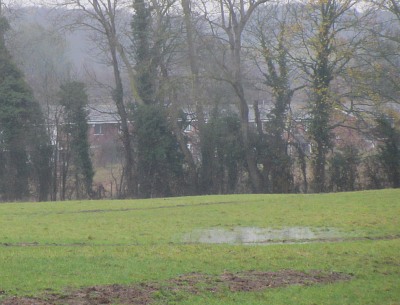 A number of people, living in Metcalf Close, were also worried about the increased risk of flooding. They live downhill (in the picture) from the proposed field (seen in the foreground). Local people also said that the developer’s studies of the ecology of the area were inaccurate. There are lots of bats and badgers. 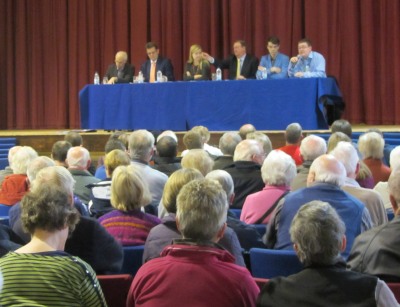 We learned from the platform that the developers, Hallam Land Management from Sheffield,  did not hold any pre-planning talks with either the district, town  or county council, or the local MP. For such a large development that is suprising.

A local person, and a person from another town affected by Hallam, said that if not successful initially “Hallam always appeal and are often successful as there are no local plans about how to meet national housing targets.”

The chief planning officer for the district council, did not want to pre-judge the planning application, but said there should be a draft local plan by Spring 2013. That would be before any appeal is likely. At an appeal, a draft plan will be better than no plan at all but won’t have as much weight as a full plan.

Responses to the planning application should be made via http://www.whitehorsedc.gov.uk/java/support/Main.jsp?MODULE=ApplicationDetails&REF=P12/V2266/FUL .