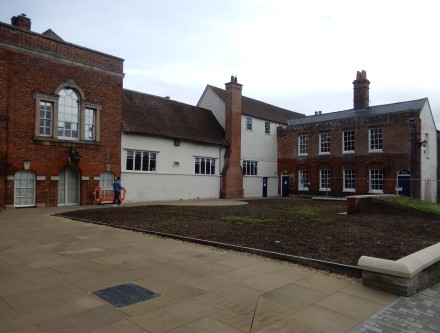 As work continues at the Guildhall, the Abingdon-on-Thames Town Council meeting was moved to another part of town. 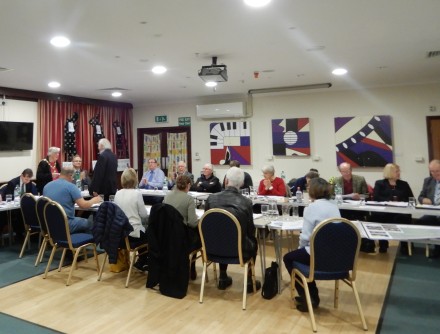 The council met at the North East Abingdon Community Centre, next to the Peachcroft Shops.

The meeting began with the presentation of grant cheques to community groups. Then members of the public were allowed to speak.

A business person gave an update about the closure of the BID (Business Improvement District) after a petition showed businesses overwhelmingly wanted the district council to wind it up. But questions remained about BID accounts and when businesses would see some of their money back.

Pat Bryden showed the maps she is a designing as a tribute to Alan Bryden, an ex Councillor. They will be the other side of the River and Rye Farm car park.

There was a question by Councillor Angela Lawrence, the one Independent on the Council, about progress on the Community Led Plan, something she is keen on. She was told that only 4 people turned up at the last meeting by the Chair of the Plan Committee, who is waiting for community groups to come back having made progress on their actions before calling another meeting. The Chair said it was a Community Led Plan not a Council Led Plan.

The Mayor announced forthcoming dates which include the Over 70s Christmas Party on 17th December, and a quiz at a yet to be decided date – due to uncertainty about the Guildhall.

There was some discussion about the Guildhall where refurbishment is over budget by over £300K due to 3 unforeseen factors: the need to remove asbestos, water ingress issues, and the biggest factor – changing regulations for fire detection and emergency lighting .

However the chairman of the Guildhall Committee said they had the money thanks to the £1.2M pot that the District Council gave to the Town Council to take over the building, and the money saved because the Guildhall has been closed for three years. The old and new parts of the building will be outsourced and run by the company who are going to open the cinema in the Abbey Hall, and that will mean reduced running costs for the council. The building will also be fit for the next twenty or thirty years. It had been neglected in the past under the previous owner – the district council.

It had been proposed that 3 flags be erected in the newly refurbished Roysse Court, at a cost of £5K, but the Council decided not. Councillor Pat Lonergan said the town was over-flagged anyway. The council are to purchase a WWI memorial bench and a WWII memorial bench for the Roysse Court.

Three silhouette soldiers have been given to the Council who wanted to find a good location where they would not be vandalised. They could go in Roysse Court or beneath the County Hall Museum.

The Council flicked through a lot more committee minutes with few comments. There are of course the upcoming 100th Anniversary of the end of the First World War Years events in Abingdon. They include a Bun Throwing on 10th November, and a special service on the same day with readings from the Roll of Honour.