2017 marks the 300th anniversary of the Freemasons in this country. That makes Freemasonry older than the American Republic. George Washington, the first President of the USA, was a Freemason.

To coincide with the anniversary there was a five part documentary on Sky TV giving an insight into the ancient rituals and practices of the this band of brothers. 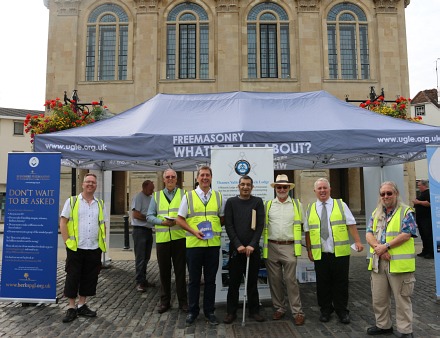 To mark the anniversary the three different Abingdon Freemasonary lodges joined together for an outreach event on the Market Place today. A lodge is the basic organisational unit, and the three Abingdon Lodges are:
* Abbey Lodge
* St Edmund Lodge
* St Swithun’s Lodge

They had a sign the read ‘Don’t wait to be asked’, and were there to tell people more about themselves, and why they had joined. They told me that they do a lot for charity, not collecting from the general public but raising money through their own events. One recent event was a charity horse racing night. One charity they currently support is the Abingdon Bridge who offer help for Abingdon young people living through difficult circumstance.

At the end of the day they had met eleven people who expressed an interest in finding out more, and met with a large number of people.

I was also asked  to mention an upcoming concert in aid of the Abingdon Bridge. It can be found at https://www.abingdon.org.uk/future_events on November 3rd. The Abingdon School Big Band will perform,  and be joined by Joe Stilgoe, an internationally acclaimed singer, pianist and song writer.

7 thoughts on “300th anniversary of the Freemasons”