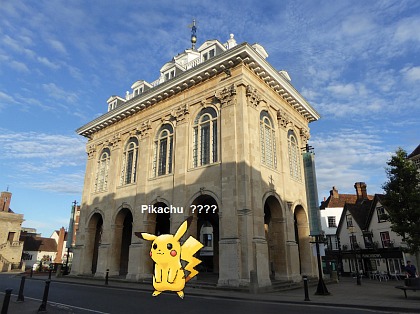 On Friday evening I was taking a picture of Abingdon County Hall when 3 young lads came near aiming their smart phones at a point nearby. I could not see what rare Pokémon they were trying to catch as Pokémon are not visible on my camera.

The official Pokémon website explains: “As you move around, your smartphone will vibrate to let you know you’re near a Pokémon. Once you’ve encountered a Pokémon, take aim on your smartphone’s touch screen and throw a Poké Ball to catch it. Be careful when you try to catch it, or it might run away!”