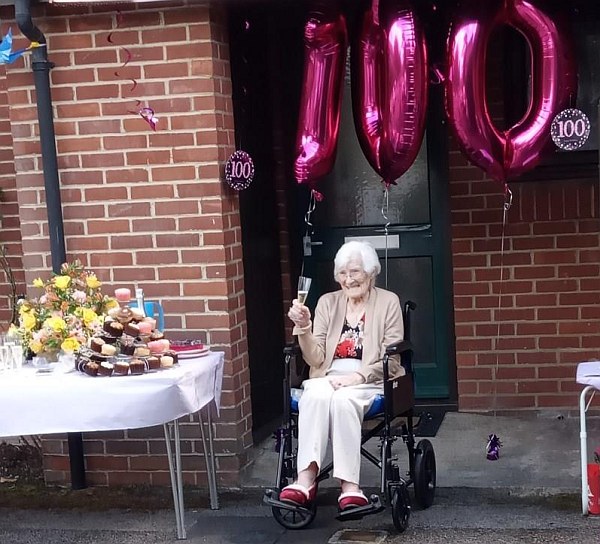 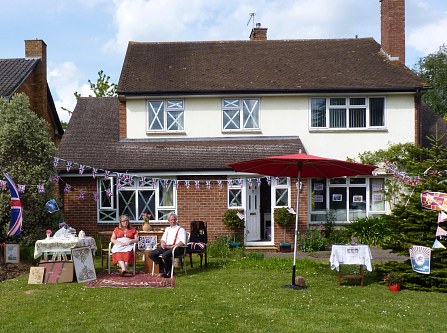 This house was voted best display by the residents of Pickler’s Hill. This was also a history exhibition as well as celebration. 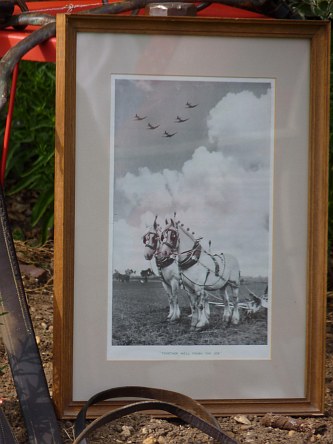 This picture has the caption ‘Together we will finish the job’. 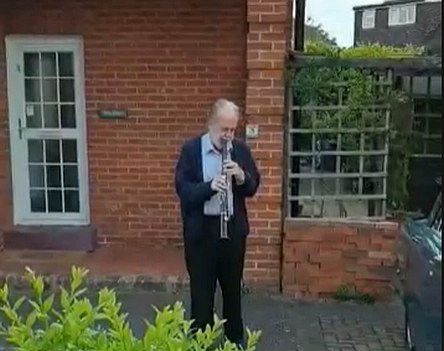 George Haslam regularly plays during the Clap for Carers on Thursday evening on the Workhouse estate.

The houses on Abbott Road, Thesiger Road and 4 – 42 Oxford Road have long held their own identity because of their location on the site of the former workhouse. They have been brought together by the Abingdon Coronavirus Community Response group (ACCR), set up in the wake of the Coronavirus, and now have a Whatsapp group to coordinate what they do. They are making vital PPE, have set up flour, rice and plant hubs and came together for a socially-distanced VE Day commemoration in their front gardens and drives.

There was a multicultural look to some of their displays 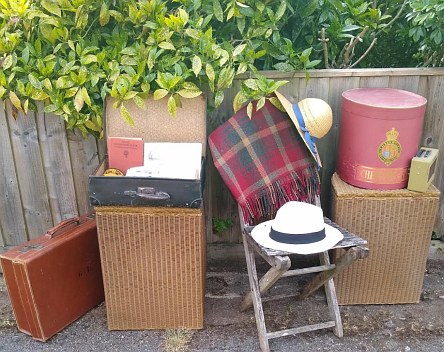 There were historic displays. 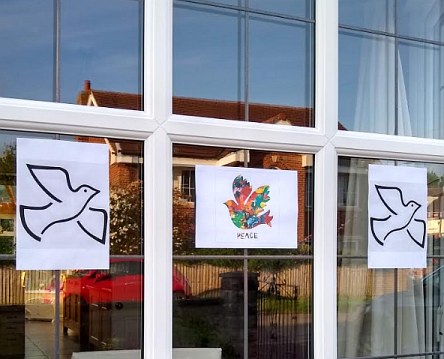 Some people were thinking of peace not war. 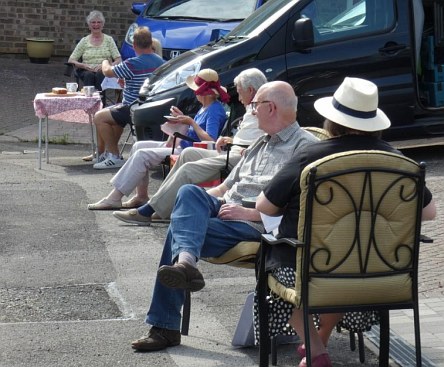 From Roger, here is a corner of Windrush Way, Radley Green, celebrating the 75th anniversary of VE day.

Although not Abingdon, my Dad’s memory of VE Day brings the time to life ‘All workers and school children were given a day’s holiday to celebrate ‘Victory in Europe’ Day (V.E. Day) on the 8th of May 1945.  In recognition of V.E. Day the rather drab street of terraced houses, where we lived in Leicester, was transformed overnight.

Our neighbours produced long ladders and between them they strung up a series of colourful banners across the street.  Union Jack flags, gay pennants and balloons hung from the banners high above our heads and many doors were decorated with gaudy coloured crepe paper.  An upright piano was pushed out from one house into the middle of our street.  Halfway through the afternoon, a variety of tables appeared and scores of parents and children tucked into sandwiches filled with lashings of salted dripping, jam and cheese.  When these were eaten jellies, macaroon cakes, buttered slices of malt bread and lemonade appeared on the tables.  Mahogany coloured tea was served continuously from a steaming urn with a built in calor-gas heater.

Although we were not allowed to take part in any of the street parties, we observed the non-stop celebrations, in a clandestine sort of way, from our parents’ front bedroom window.  As it grew dark, the blackout curtains were torn down from windows all along the street.  For the first time in five years the pavements were flooded with light.  The revellers danced to the accompaniment of the old, out of tune, honky-tonk piano.  Bonfires were lit in the nearby park and on the allotments.  We also heard the distant peel of church bells and the sound of fireworks.  Everyone seemed to be waving flags and as the evening wore on an impromptu procession formed and weaved all over the street.  Groups of neighbours held hands and danced in circles to the music of the piano, swaying as though in a hypnotic trance.  Younger children sat on the doorsteps watching the dancing and eating lemon curd and peanut butter sandwiches from plates in their laps.  All of these festivities were entirely appropriate because the nightmare of war, that the community had endured for so long and with such fortitude, was at long last over. 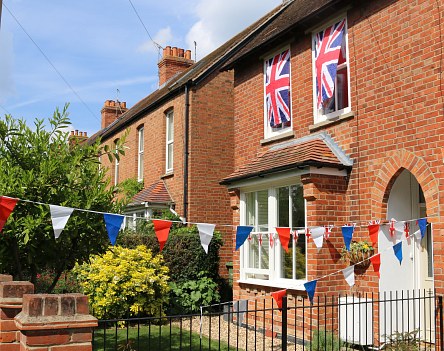 We visited some residential areas during our daily walk and saw a lot of bunting and flags put out for VE Day 75. This display is in St John’s Road. We walked down Geoffrey Barber Road where, in places, every other house had a flag or bunting outside. Winston Churchill’s speech was playing on a loudspeaker at 3 pm. A lot of people were sitting in their front gardens for the celebration.

Elsewhere we saw people out in front gardens having picnics and talking to neighbours at a social distance.

East St Helen Street had people sitting out on their doorsteps with bunting on their houses. In West St Helen Street the drum major from the Oxford Caledonian Pipe Band had draped a Union Jack from his window. He also played the drum before and after the 2 minute silence at 11am. 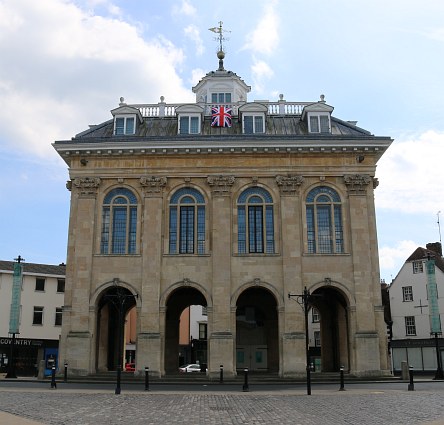 We had a discussion about what people in Germany felt about VE Day. I was interested to then read the new Abingdon Museum Blog as it gave a German perspective to VE Day. 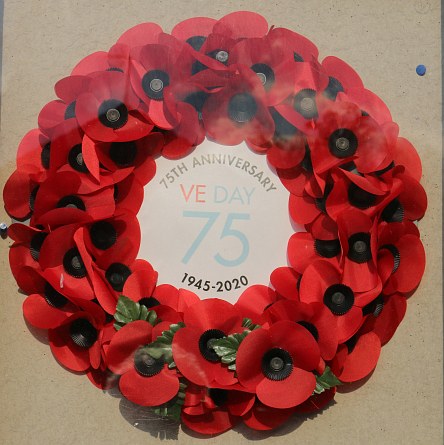 The Lord Lieutenant of Oxfordshire said in a video speech that VE Day 75 is an important time of remembrance and celebration. We remember the sacrifice that people made on the front and at home in WWII. He drew a parallel to the Covid-19 pandemic and said the people working for the NHS are on the front line. (Picture of wreath outside Abingdon Royal British Legion) 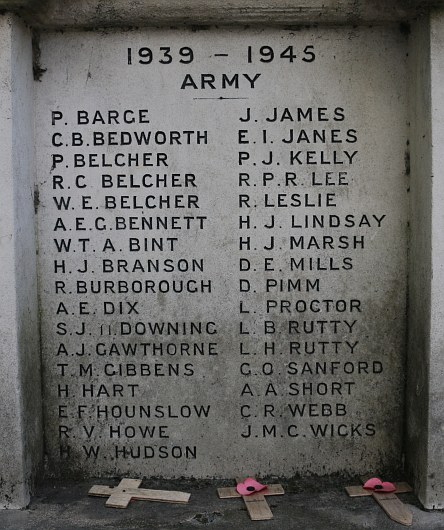 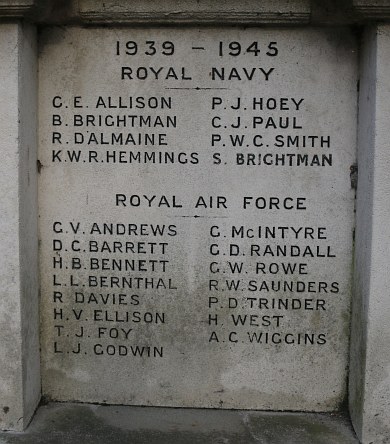 Steve King has written a book called Fifty-Six telling the story of the men from Abingdon who died on active service during WWII. They gave their lives so that we could have peace. 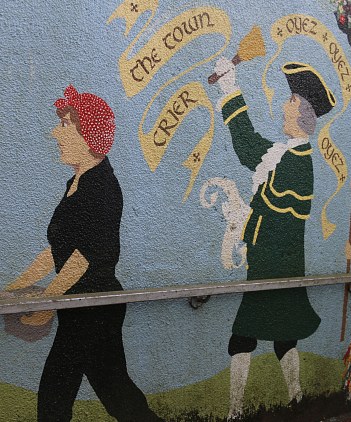 The Guild of Town Criers released a video with a Virtual Cry for Peace. It remembered the sacrifice made by women at home during WWII … 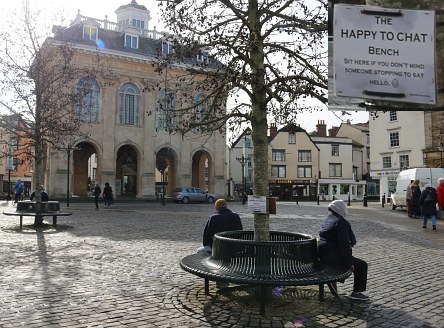 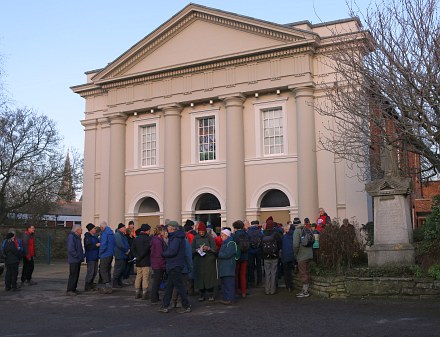 The Christian Aid Walk set off from the Abingdon Baptist Church at 10 am this morning. 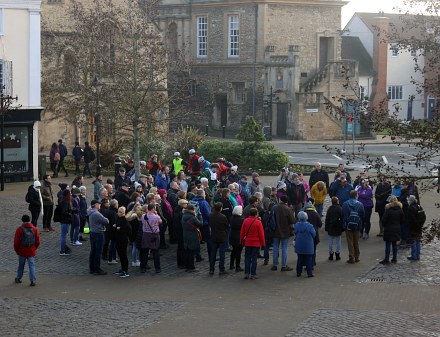 The Abingdon Boundary Walk set off from the Market Place at 11 am this New Year Day’s morning at the start of 2020.

Count how many people were on the walk on this video. There were a lot. 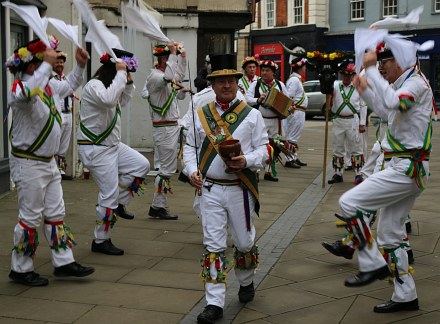 From about 12:30 pm, Abingdon Traditional Morris Dancers performed at the Punchbowl and Kings Head and Bell and carried on playing music most of the afternoon.