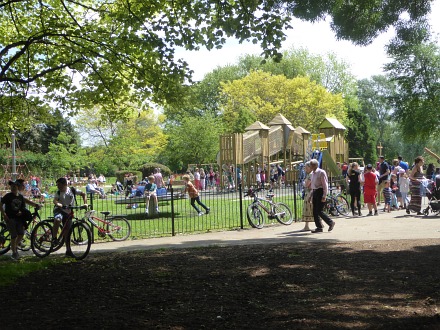 Over the weekend the Abbey Play area was opened, and proved very popular. Although 3 or 4 times the size of the previous play area, it was full at times. 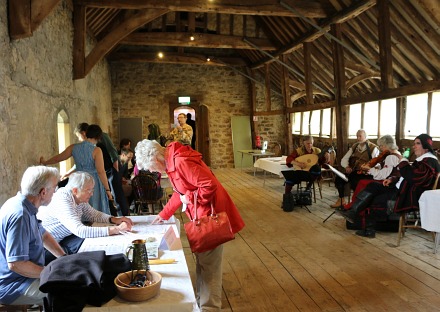 On Bank Holiday Monday the Abbey Buildings also opened with a number of activities. The Oxford Waites performed in the Long Gallery, and different theatre groups rehearsed, and music was performed in the Unicorn Theatre, . 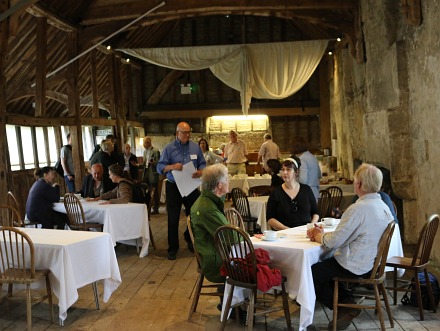 Also in the Long Gallery food and drink was being served, and societies had stalls. 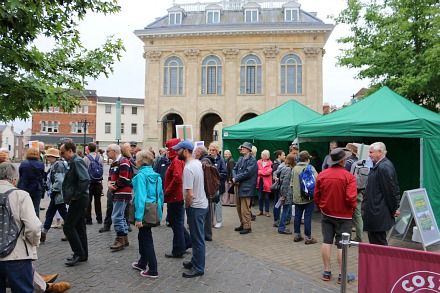 Eight different walks set off from the Market Place, some in the morning and some the afternoon. 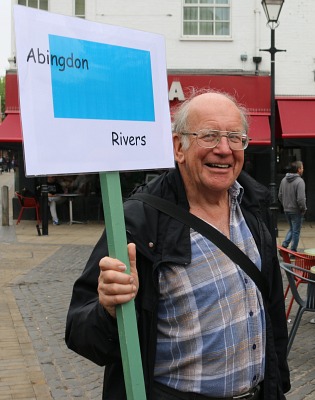 New was the Abingdon Rivers Walk led by Martin Buckland, 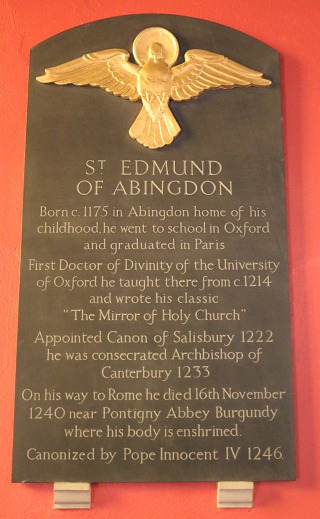 and the Saint Edmund Walk led by Anne Dodd. Both were well researched and very interesting. The Friends of Abingdon have launched a St Edmund project to give more prominence to St Edmund, and are linking up with other places where he is well remembered. The plaque above is in the St Edmunds Chapel in Our Lady and St Edmund’s Church, Abingdon.

P.S. The Abbey Buildings are open to the public from May 1 to September 30, between 2pm and 4.30pm on Wednesdays, Thursdays, Fridays and Sundays, but not usually with so much going on.

The new enlarged play area at the Abbey Meadows is almost complete. Over the last three or four months children have been watching it take shape. 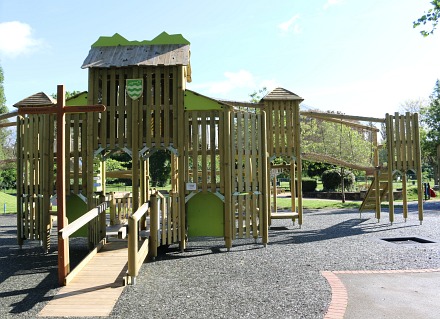 The Vale of White Horse District Council said when work began that the £320,000 play area would open early summer (weather dependent) and would feature a Grand Abbey climbing area and an ‘Abingdon Lock’ river scene. 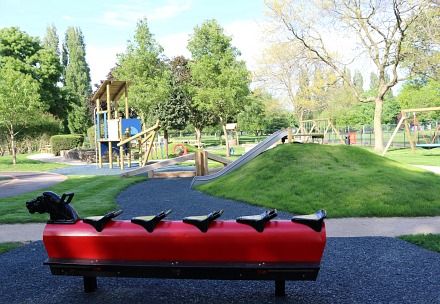 Some features from the past have survived. The trusty rocking horse was getting a coat of red paint over the weekend. 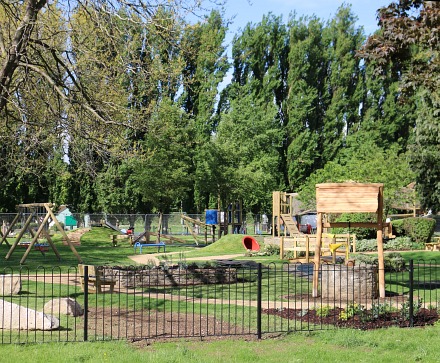 The well and some of the walls from the Crazy Golf have also survived in the new design. 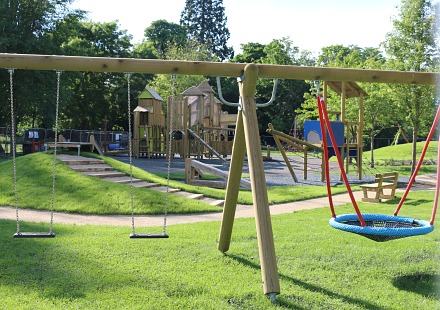 There is lots of new equipment, for a wider age range than before. The tennis courts are now a kick about area.

The only thing I can see missing is the children. 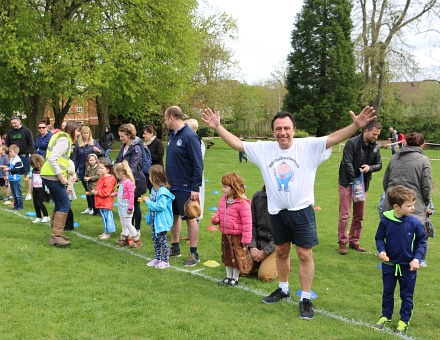 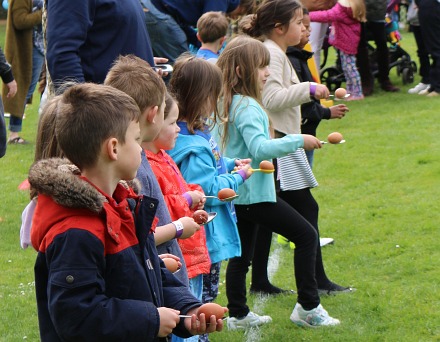 There were races throughout the day starting with 4-6 year olds at 11:00. 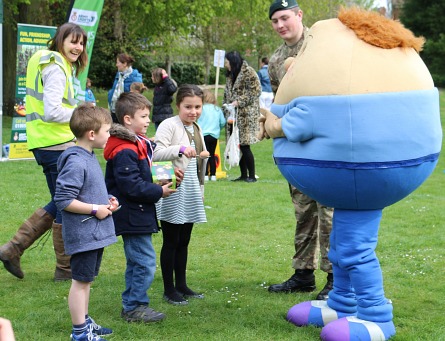 The winners of that were presented by Eggbert with medals and an Easter Egg. 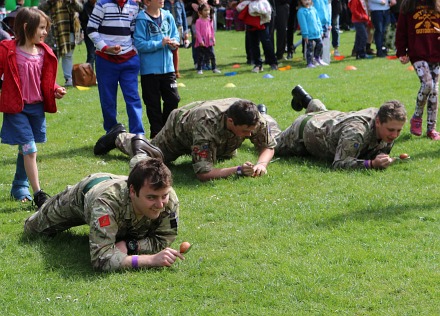 There followed a variety of other races including the army cadets’s crawling egg and spoon race. 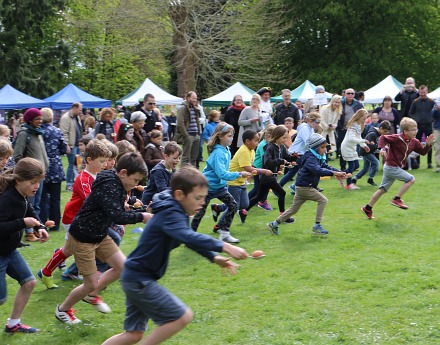 At 12:00 was the race for 7-9 year olds, and then other age categories. The final race was for big folk over 65 at 15:00, and a special run by Paul Gustaffson with an enormous egg and spoon. 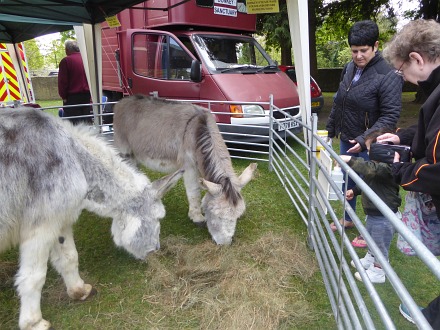 The event was very popular with young families who needed something to keep their children occupied in the middle of the Easter holidays. There were also bouncy castles, donkeys from the donkey sanctuary, welly wanging, puddle jumping, an obstacle race, painting and crafts, and free fruit. 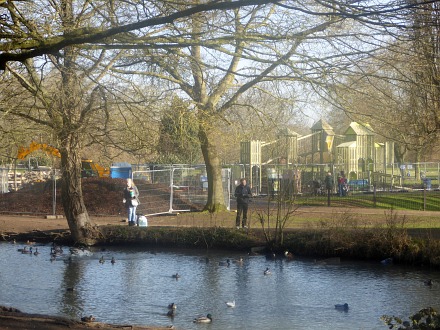 Children going to the Abbey Meadows this half term may not be able to play in the play ground. 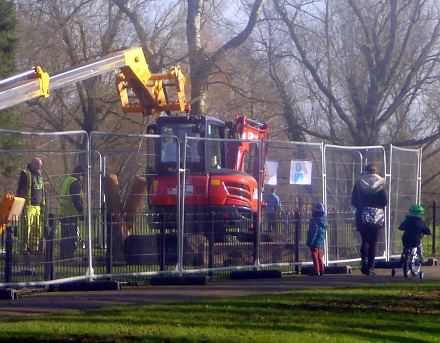 But it is very exciting seeing the new equipment being constructed, and watching the big diggers.