Vale of White Horse District Council (VWHDC) has announced a regeneration review for central Abingdon to identify realistic options for three properties the council owns in the town centre: 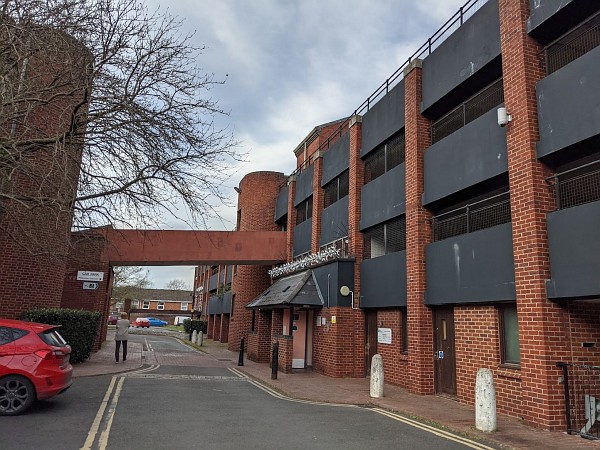 * the Charter area and car park 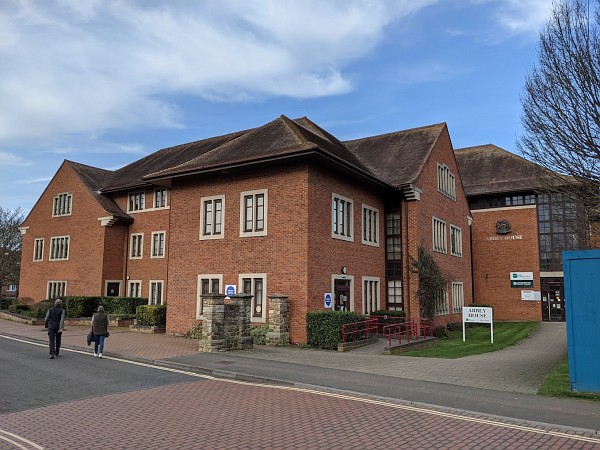 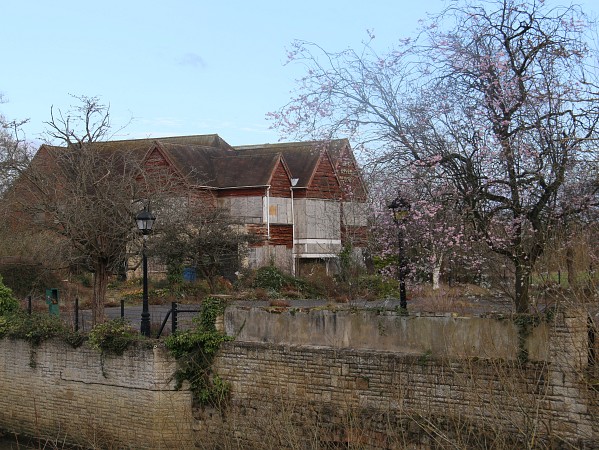 They are talking with businesses and community groups this spring. They will do a survey and town centre event for the public in the summer. A report, to identify what future improvements are needed, will be published later this year. This will happen alongside the development of the Neighbourhood Plan which is also looking at the future of central Abingdon.

Currently The Charter car park is subject to urgent and long-term repairs as the upper floors are currently closed. Abbey House is currently being leased by Oxfordshire County Council for office space. The Upper Reaches Hotel is on a very long lease to a third party and has been closed for a number of years. 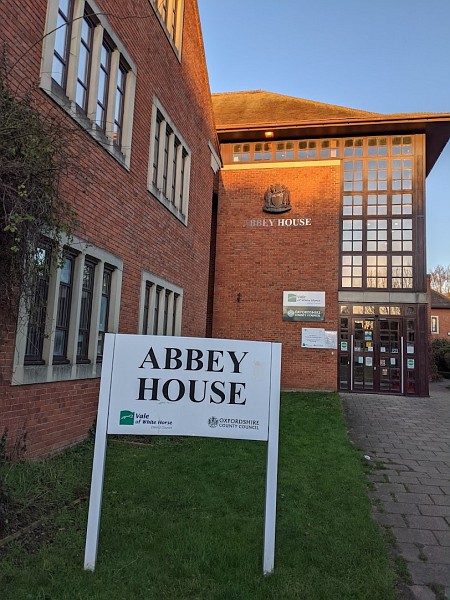 Next came a district council report to the town council.

One subject of note was that the Yellow Submarine charity are waiting for the Charter vaccination centre to close and will then take possession of the space (could be at the end of March) and are looking at a major program of refurbishment. They are looking for some grant funding for quite a big project to make this space useful to disabled youngsters and teenagers. It will support those with learning difficulties or autism and also other community groups working in this general area. 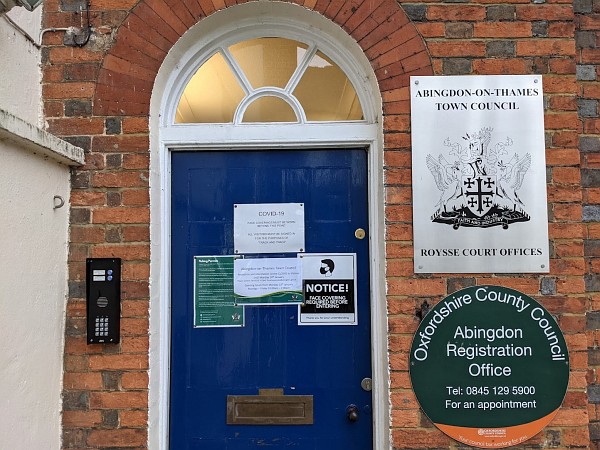 The Town Council meeting proper then began. There was a minutes silence for Ewart Hemings, the ex Mayor and Freeman who died in December. Then councillors went through the committee papers one by one. This was also the meeting where the 2022/3 budget was set. Committee names have recently changed. The Museum and Guildhall committees are now part of the first committee to report and called Community Advisory Committee.

The Town Council have budgeted £52,410 for the Queen Elizabeth II’s Platinum (70th) Jubilee. Councillor Samantha Bowring, the leader of the council, said this is because the town of Abingdon has a strong interest in royal events. The highlight of most royal events in Abingdon is the Bun Throwing Ceremony. Councillor Bowring said, ‘Be assured! Buns will be thrown.’ 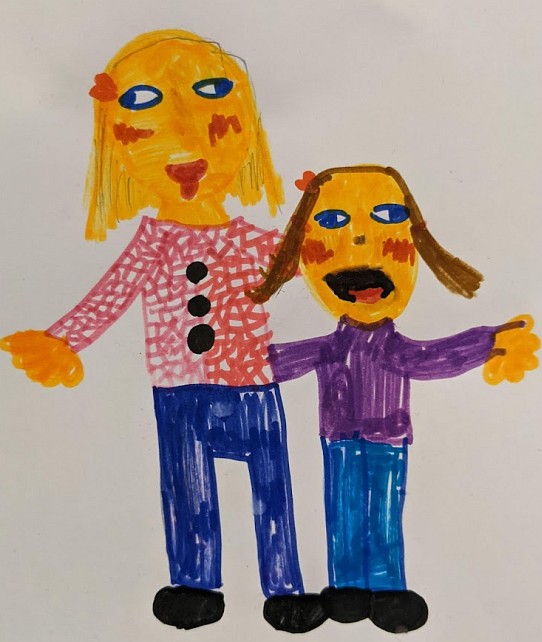 There was £30,000 for an Integrated Youth Support Project. The next step is for a Youth Council to begin from Apr to Jun 2022.

A small task-based working group of four councillors was set up to look at improvements to play areas. £60,000 was put into the budget for this purpose. 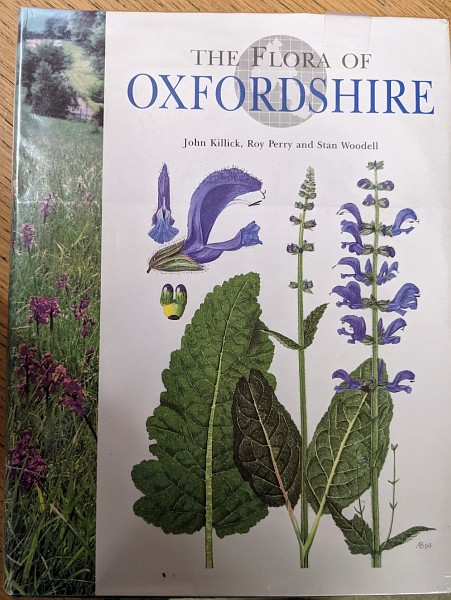 The council is also putting together a biodiversity plan with the help of John Killick, an expert in Oxfordshire Flora living in Abingdon.

The finger point signs round town were discussed and are in need of attention. 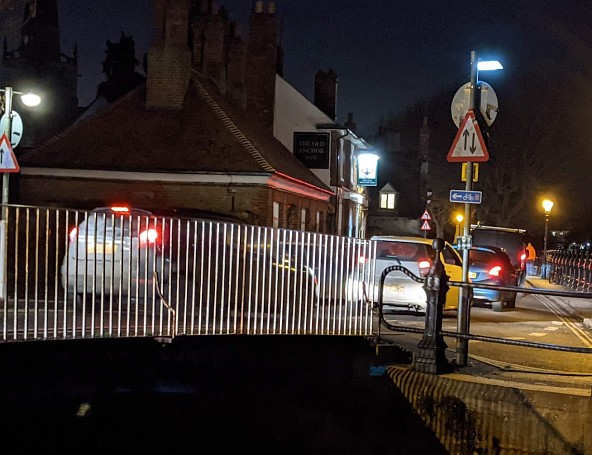 Oxfordshire County Council are putting in camera enforcement of traffic restrictions and the first schemes are in Oxford. Abingdon could bid for some in a future allocation. One area suggested was the iron bridge at St Helen’s Wharf where drivers can often be seen going the wrong way over the one way bridge.

It was also agreed that the Town Clerk write to the County Council to request a blanket 20mph limit across Abingdon and a 30mph limit on the peripheral roads – Audlett Drive, Twelve Acre Drive, Dunmore Road, Copenhagen Drive and Colwell Drive. This would be subject to discussion with Oxfordshire County Council.

The budget was passed after a presentation by Councillor Samatha Bowring.  This included some new items such as £8,346 towards changing CCTV in town to change from analogue to digital, and speed indicator signs £15,000. (There has been a nationwide move to reduce traffic and speed of traffic within towns for reasons of safety of the emissions and traffic flow, especially in those close to schools. For this to be successful it will need supporting infrastructure. So some of the developer funding for speed indicator signs.)

There was £30,000 funding to Abingdon Carousel, a base from which all kinds of family services can operate.

The council will be putting funding into a new community woodland. A site has been identified and there are volunteers able to help, and the plans for this project will be revealed later this year

The council’s net expenditure requirement is £1,830,659. Of that the precept (council tax) will raise £1,755,659, and grants and developer funding of £75,000. The Community Infrastructure Levy (CIL) or developer funding is a charge which can be levied by local authorities on new development in their area.

The current housing developments in the north of the town will mean an increase in the number of residents included in the Dunmore, Peachcroft and Fitzharris Wildmoor wards and so it requested that the district council be asked to review the distribution of membership between wards, within the context of a council membership of 19.

Finally there was a special motion. The council agreed to support the Climate and Ecological Emergency Bill, a private member’s bill currently going through parliament aimed at tackling the climate crisis and environmental disaster. It would enshrine in law a commitment to deliver policy and action in line with the latest science. 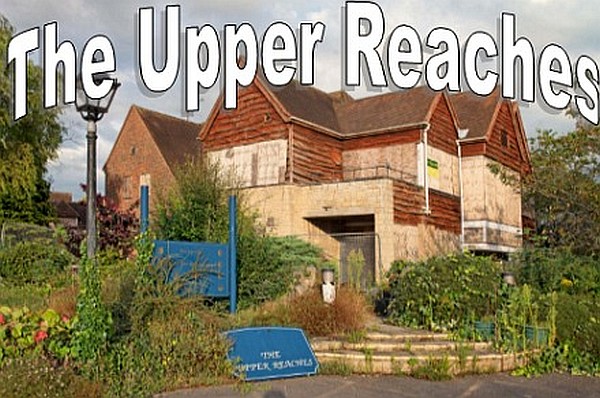 Catherine from the Community Safety Team at the Vale of White Horse District Council came to speak to the Town Council on the situation with the Upper Reaches Hotel. The tenant (hotel owner) has put some measures in place in December and the Community Safety Team want more done since behaviour issues are still happening. With that in mind they are looking to put in place a Community Protection Notice ( CPN ) to get the tenant to properly secure the site against the people with problem behaviour.

Town Councillors asked for timescales. Some were angry that nobody had come along to talk on longer term strategic issues of the site. The Town Clerk had however spoken with the latest personnel at the Vale Property team. The Town Clerk was told this matter is to do with the relationship between the landlord and the tenant and can’t be shared in the public domain. They property team said when they can share these things, they will. 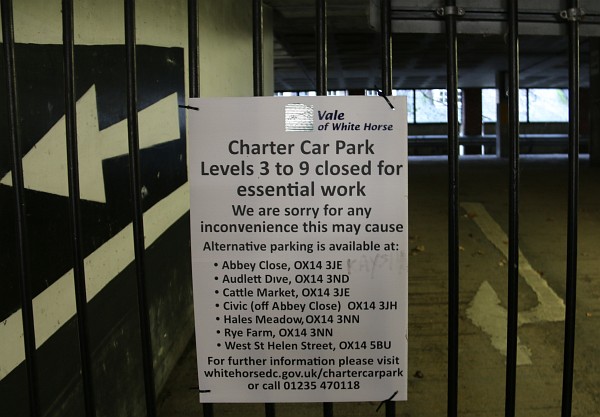 Charter Carpark
The Town Clerk had also asked about progress at the Charter Carpark. In the upper levels there are concerns regarding structural issues and fire safety.  The district council will provide an update  for the Town Council meeting on the 30th March. 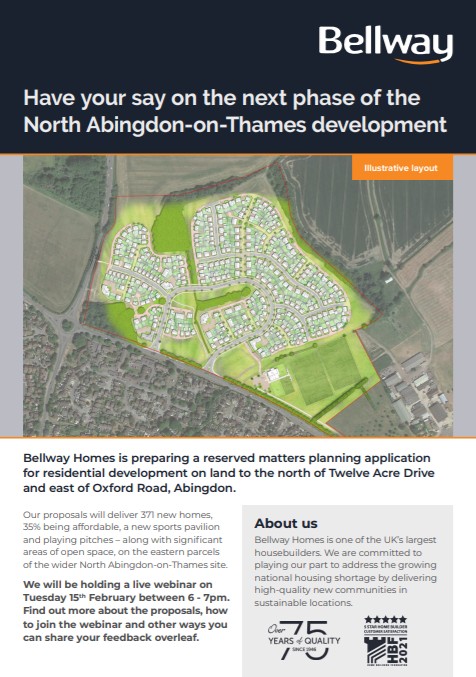 He said in response to his report on the progress of the Diamond Interchange at Lodge Hill that the first plan had been unfriendly to pedestrians and cyclists. An updated plan was more friendly to pedestrians and cyclists. The new plan would be a compromise as the Highways Agency are not going to allow a plan that causes traffic backing up from the Diamond Interchange along the A34.

A question was asked about the design being constrained by the existing bridge and its life expectancy. This question was asked because the bridge at Kennington, nearby, has failed and is being rebuilt. Councillor Fawcett responded that he was sure the bridge was inspected regularly and as it was built in the 1970s it should have a very long life still. But he would check they had taken that in consideration in the plan.

Town Councillors had been given a presentation by Bellway Homes on developing the land between the Oxford Road and Peachcroft Farm. More information and details of a webinar are available at https://www.bellway-northabingdon.co.uk/. The proposals will deliver 371 new homes, 35% being affordable, a new sports pavilion and playing pitches – along with significant areas of open space, including the central St Helen’s Park.

Councillor Jim Halliday asked that since Bellway Homes are putting a planning application in for a housing development, it would be useful to have a clue when the Diamond Interchange would be completed.

Councillor Fawcett said ‘Every stage of the process has taken longer than they’ve said at the previous stage. All I can say on the positive side is we are working our way through the steps…’ 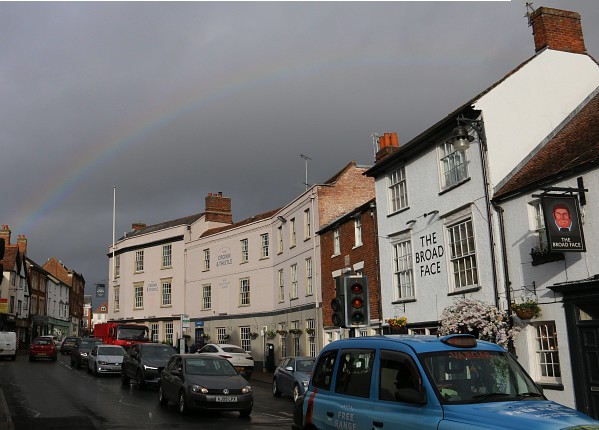 There was a rainbow this morning in Bridge Street – a sign of hope on the last day of 2021.

In 2022, some of the long standing problems in Abingdon Town Centre should get resolved. They include the cause of this queue of traffic. 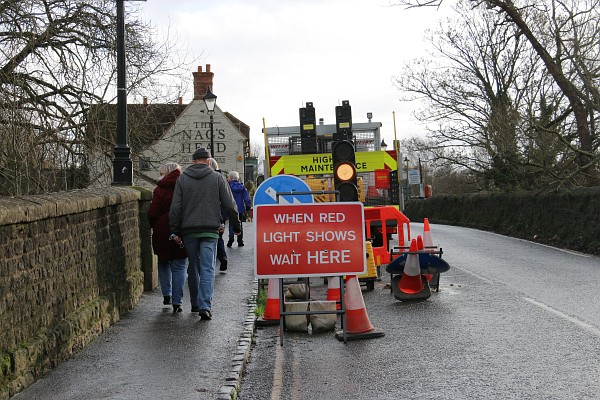 The arches under Abingdon Bridge need strengthening, and this meant reduced traffic access. The lights have caused tail backs up Bridge Street and Stert Street and possible air quality problems. 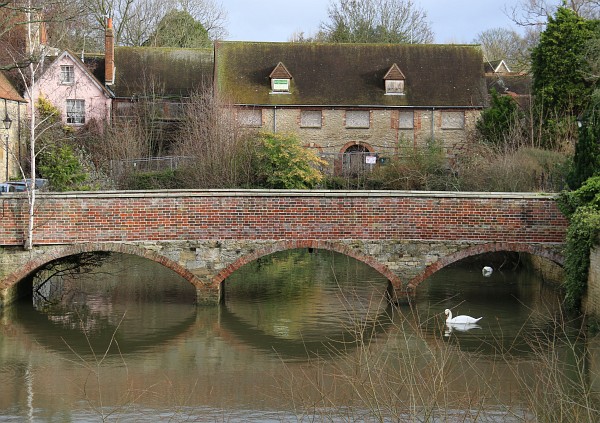 The leaseholder of the Upper Reaches leaseholder closed and boarded-up the hotel in 2015. Since then the site has become a blot on the river entry to Abingdon. The owner, Vale of White Horse District Council, will hopefully get the leaseholder to put forward acceptable plans for the sites future in 2022, 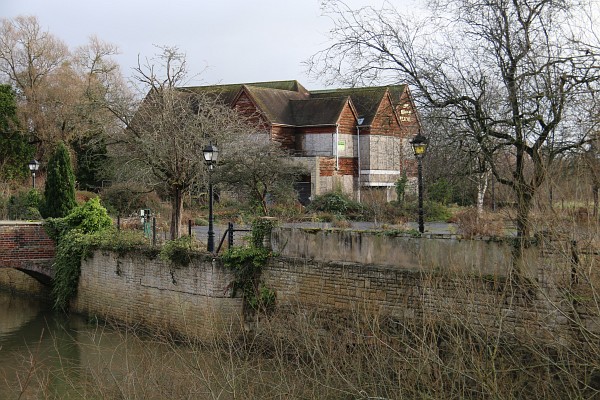 or take back the lease. 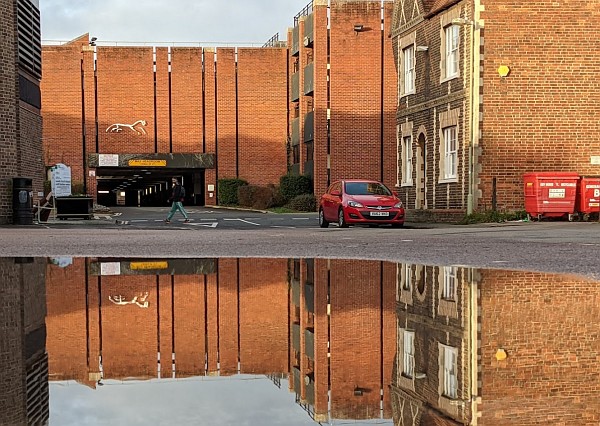 Most of the Charter Carpark has been closed since early March 2021. The closure did cause problems for people going to the charter vaccination centre in 2021.

There are other carpark available but the new civil parking enforcement, introduced from November 1st, has increased demand for public carparks.