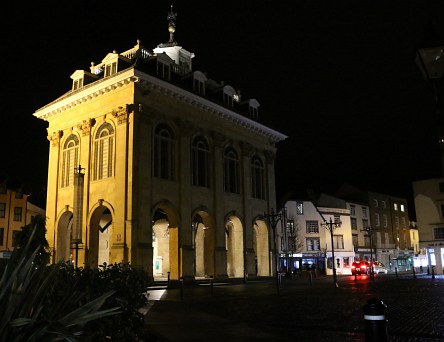 This picture of the County Hall in Abingdon on Thames was taken at 11 pm on 31st January 2020. Britain has just left the European Union. 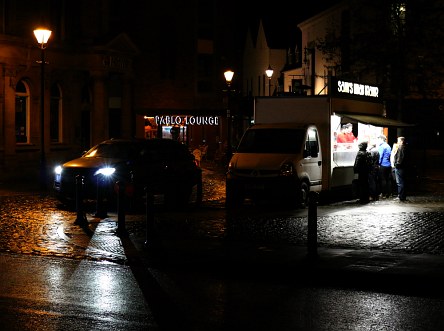 There is a fine drizzle. Sami’s queue continues unchanged. There is a phut phut where somebody has launched a small rocket but no bang or shower of sparks. We are entering a new era but unlike new year there is no tradition for leaving the EU. 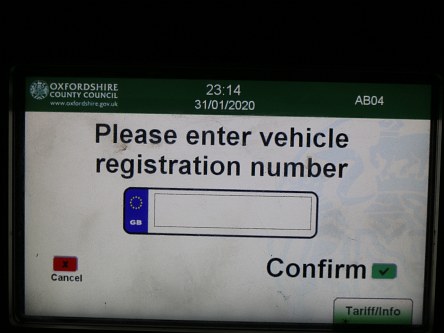 Having walked around the town centre and failed to find any signs of celebration, I check the time. No bells were rung. There was no dancing in or outside the pubs. Some people watched a face on a large screen explaining the significance of this day. 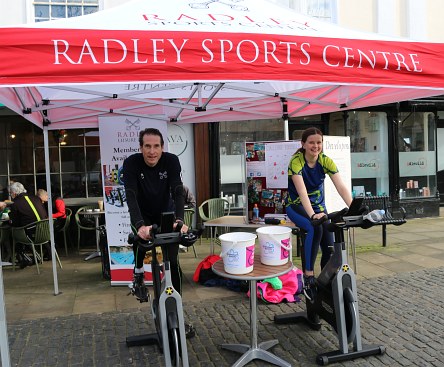 On the Market Place on Wednesday a group of people from Radley Sports Centre were cycling as part of their Challenge Yourself in January – Radley’s Iron Man Challenge. Their distance on Abingdon Market Place was 112 miles. 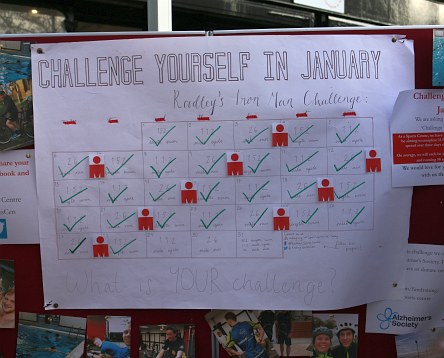 They have set themselves targets for swimming, running, and cycling every day of January, and raising money for the Alzheimer’s Society. More on facebook. 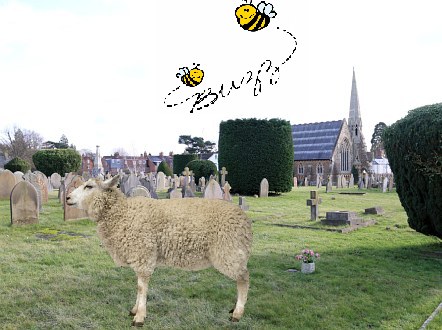 The Amenities Committee resolved to allow the grazing of sheep within the meadow area of the Spring Road Cemetery on a trial basis. Members also resolved to permit bee hives in the area with appropriate warning notices. 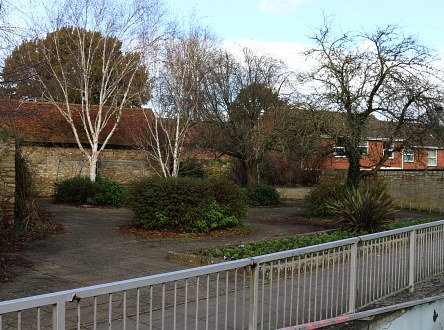 The Council agreed to ask council officers to investigate disposing of the land north of the pedestrian subway in Stratton Way. It has become a site of anti-social behaviour, was difficult to maintain and had little amenity value. Officers will now investigate and report back on possible uses. 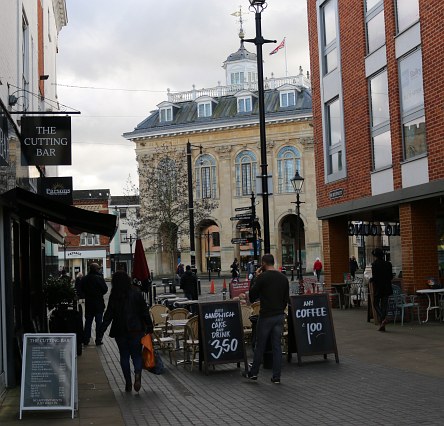 It is back to the drawing board. The recently elected Lib-Dem Council are to undertake a Neighbourhood Development Plan. As people may remember the previous Conservative council started a Community Led Plan but it did not get completed. Before that South Abingdon undertook a South Abingdon Residents Plan which did not get completed. The Council will first advertise for a consultant to undertake the Neighbourhood Development Plan. They will then shortlist, and appoint a consultant to scope the plan.

The Mayor reported that he or the deputy Mayor had attended 45 events since the last Town Council meeting. He highlighted the Over 70s Party and thanked Hilton Garden Hotel for hosting the event. He attended the John Mason Chater Day and had to field lots of difficult questions from scholars of John Mason about Abingdon’ history. Last week he attended a Holocaust Memorial 75th Anniversary event and quoted the German Pastor Niemoller:
First they came for the socialists, and I did not speak out—
Because I was not a socialist.

Then they came for the Jews, and I did not speak out—

Then they came for me—and there was no one left to speak for me. 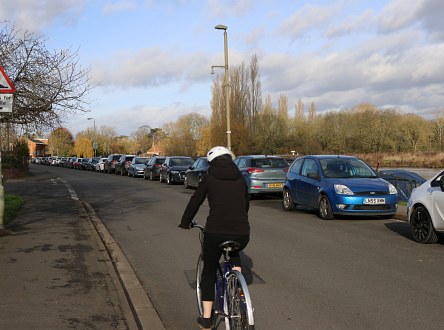 The Green Advisory and Scrutiny Committee are due to receive an energy audit report arranged by Abingdon Carbon Cutters, and undertaken by Oxford Brookes University at no cost to the council. It is hoped this will highlight some immediate actions to reduce the carbon footprint of the council. The committee is looking for CO2 & NOx reductions. They are also looking at Bikes and Buses and promoting their use.

The budget was set by the council for next year. This will be funded by a precept of £1,633,160 (tax paid by Abingdon Council Tax Payers); about £40,000 from reserves, and some money from fees and charges. Not every item in the budget was shown in the papers, just some highlights. Last year’s precept was £1,549,607. The Town Bus Service was not mentioned directly but it was said £15K would go towards green transport. It was also said that in some areas the Council would have to spend to save. The Guildhall has 70% of the Town Council energy usage and future plans include replacing the roof, lighting and heating system, and adding double glazing. 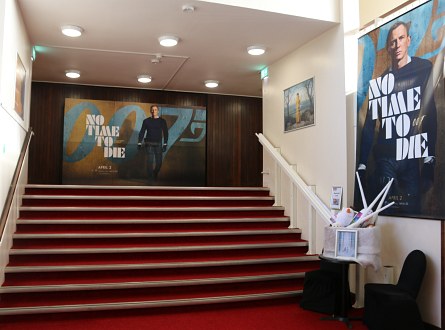 I also see the council are considering re-introducing a lift up the stairs of the guildhall for the Cinema. In December the lift at the back of the building broke down and could not be mended immediately.

There will be 4 Town Crier magazines a year as part of the council communications strategy. New notice boards have been ordered for Stratton Lodge and Roysse Court. Officers are trying to locate a manufacturer of a circular noticeboard to be sited in the Market Place.

Councillors are reported to be keen on tree planting on Abingdon Common ( across the A34 from Tesco) which is owned, in part, by the Town Council and a report has been requested on that.

Among the grants from the Town Council (and the JET fund it controls), towards improving the town fabric:
* £2,000 will go towards St Nicolas Church Tower to preserve the tower fabric and enable the bells to be rung again.

* £11,000 is needed towards work on the war memorial itself, the stonework and topping. Previous work, a few years ago, was to stabilise the structure.

* £5,000 will go towards work needed on the Albert Memorial following a periodic inspection which estimates work needed of £24,500.

* £25,000 will go towards the Friends of Abingdon, Abbey Buildings initial development phase.

* There was a grant of £7,000 towards Be Free -Young Carers, something that does not get funding by Oxford County Council Social Services.

* The annual grant to the Oxfordshire South and Vale Citizens Advice Bureau (CAB) will go up from £15,100 to £18,100. John Bright, a Director, had given a presentation before the council meeting saying 2,000 people had attended the Abingdon service last year, a 15% increase. The largest areas of concern from people attending the CAB are benefits and debts. The CAB did try out an outreach service at Abingdon Carousel last year but it didn’t work there.

* There was also an annual grant to Abingdon Bridge (young people’s counselling and support service).

High Profile planning applications that had been considered during this cycle of the Town Council included:

* The application to build flats on the sports fields next to Abingdon United Football Ground – Town Council recommended refusal – VWHDC refused and it went to appeal.

* Land North of Dunmore Road – the Town Council reiterated the need for the A34 interchange to be built before most of the houses. (Timescales were released for that project last year but as far as I could make out it still is being delayed by Highway England).

In one recent planning meeting a member of the public had complained about people not getting any notification about works on Stratton Way that brought the town to a halt. Councillors replied the Town Council often did not get notified either. 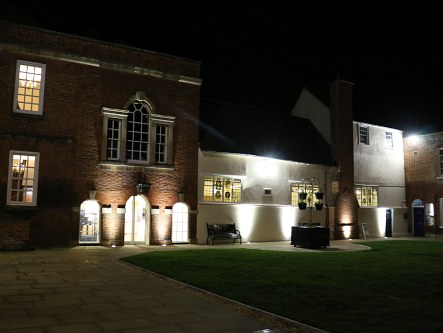 There was a lot more in the 144 pages of council minutes. This is a brief selection and not all of even this was discussed at tonight’s meeting. It was good to see an Abingdon Herald reporter at the meeting. She waited around to do some interviews afterwards. I left the building at 8:40 pm. 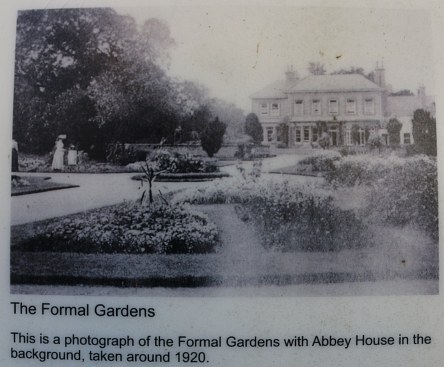 Inside the Abbey Gardens is an information board that includes a picture of the Abbey Gardens taken around 100 years ago with a lady and a girl in white dresses. They show up more than the flowers in this old photo. 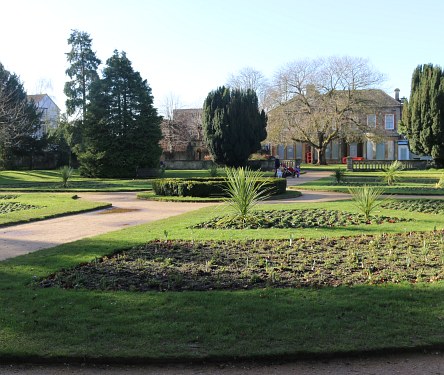 There are no flowers in the formal gardens yet. There was a lady walking two toddlers on leashes. They would have made a good picture but I can’t just go around taking pictures of people without permission. 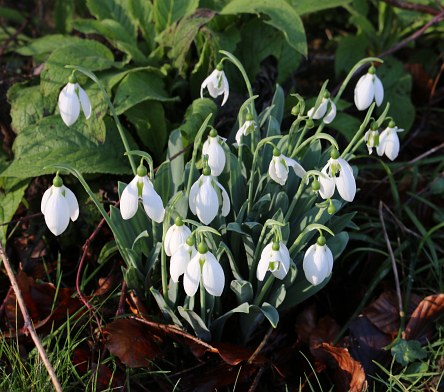 Beside the stone balustrades, white snowdrops grow. They are there every year, and occasionally coincide with the snow. 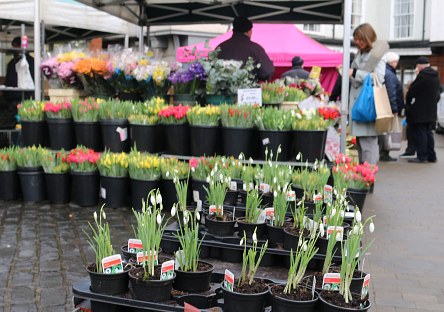 Pots of snow drops were also on sale at the Monday Market yesterday.

P.S. I got a surprise invitation for Afternoon Tea on February 2nd in Abingdon to celebrate the end of January and the arrival of the first snowdrops heralding the Spring .