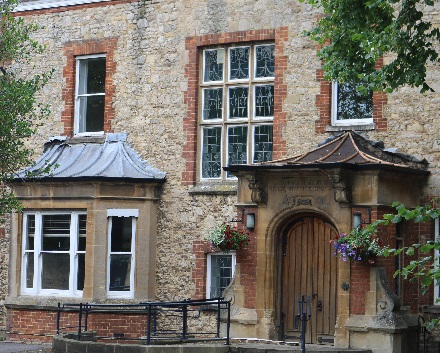 The lead appears to have disappeared from the roof of Old Abbey House Porch, and an attempt has been made to remove the lead from the window. The building has not been used a great deal since Abingdon-on-Thames Town Council moved out in June 2014. The Vale of White Horse did make efforts to sell it at that time but withdrew it from sale after protests . There was the hope that a community minded group would be able to take it over for an arts centre of something similar.

There are also signs round the back that the flat part of the roof has been disturbed. 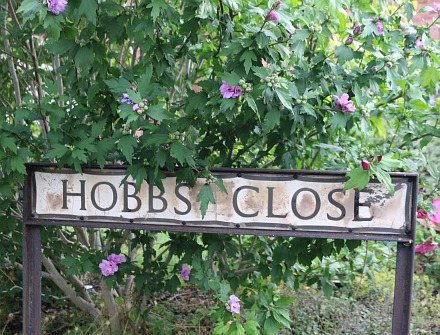 This is Hobbs Close in Abingdon. 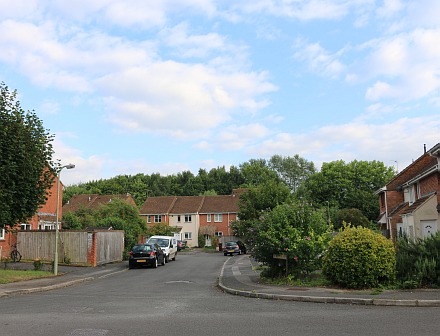 And here is the view looking down Hobbs Close towards Audlett Drive with the trees that shield Abingdon Science Park behind. 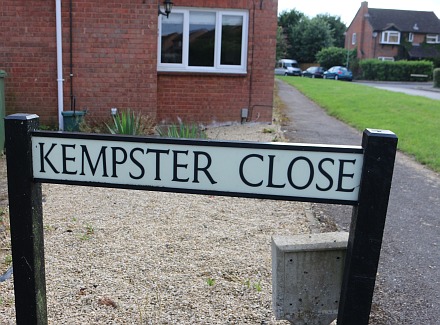 The adjoining road is called Kempster Close. What connects ‘Hobbs’ and ‘Kempster’ apart from the path between the two closes? 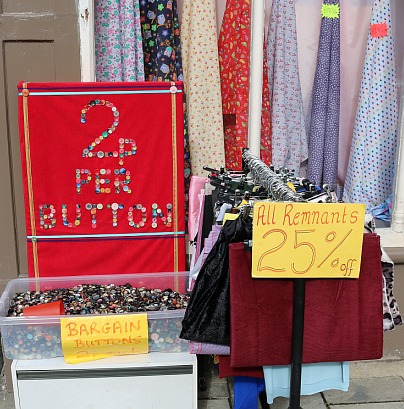 At Masons, on Bath Street, there was an outside display of buttons going for 2p per button. 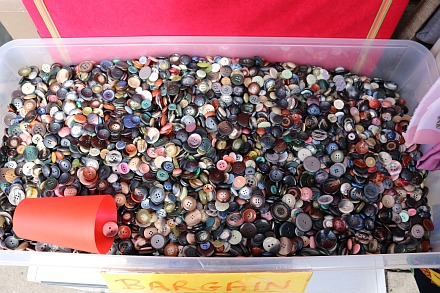 The bargain box of buttons has a plastic tumbler so that customers can help themselves in a pick-a-mix way.

I am trying to imagine what people will do with a tumbler full of buttons.We are far more used to pushing buttons these days, rather than searching through Grandma’s button box, for a missing button to exactly match a dress, suit or pyjamas. 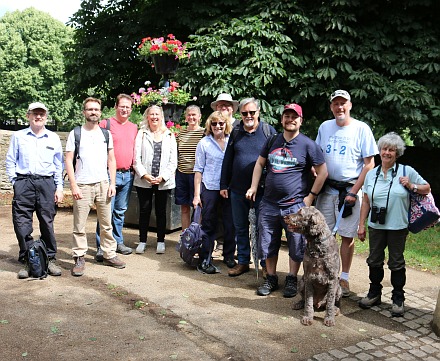 The Abingdon Drama Club annual Thames walk met at the Millenium Needle this morning – that is the pointy thing near the Abbey Gardens.

The walk was organised by Kevin – a stage manager from the club. He also organises tourist walks about Abingdon. 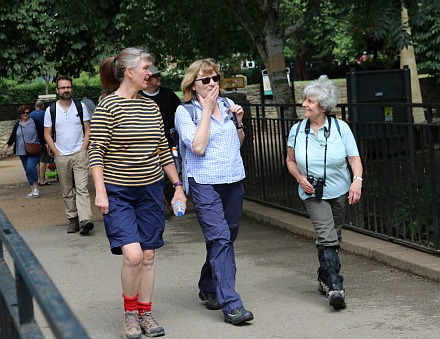 They set off at 11am. The route was Abingdon – Lower Radley – Sandford Lock – Oxford. Kevin asked for “Sensible shoes please. Bring plenty of water, sun screen and some waterproofs (you never know!!), oh and maybe a hat.“

He had also hoped for good weather but the rain started to fall before they reached Lower Radley, and continues all the way to Oxford.

The Daily Mail summed up the performance, “You can just tell the summer holidays have started.”

The Daily Mirror saw it as a “Summer holidays ‘weather curse'”. 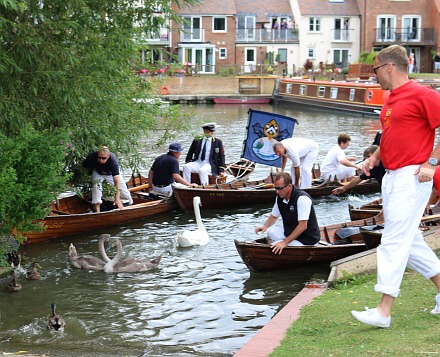 On Friday 21st July 2017 the annual Swan Upping arrived at Abingdon, completing a five day journey up the Thames. 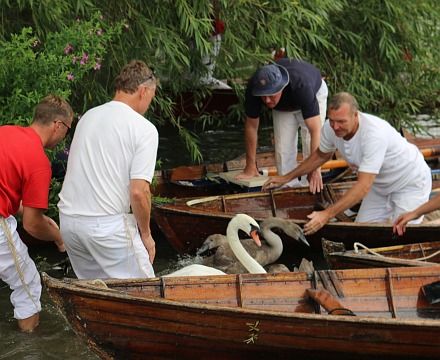 2017 was a relatively good year with more swans counted than the previous three years. 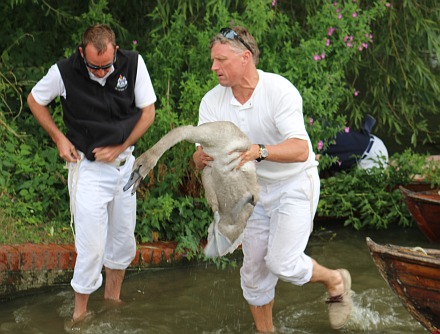 At Abingdon Marina two cygnets and a father swan were caught near the slipway. Their mother was nowhere to be seen. 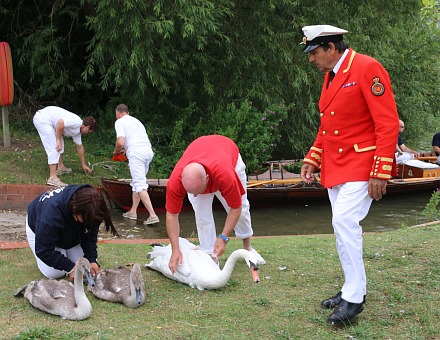 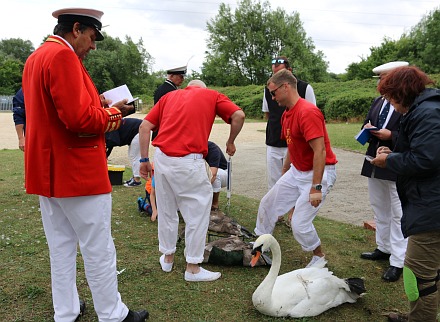 The swan and cygnets were assessed for signs of disease and injury, then weighed and ringed with identification numbers. Mr Barber gave a few white feathers, that had come loose from the adult swan, to a child who had held one of the cygnets. 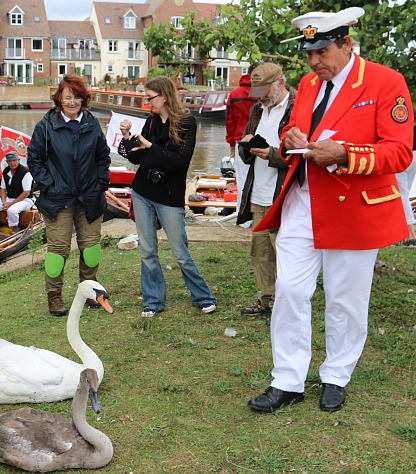 The two cygnets were claimed for the Queen by Mr Barber, although the Dyers’ also tried to make a claim. 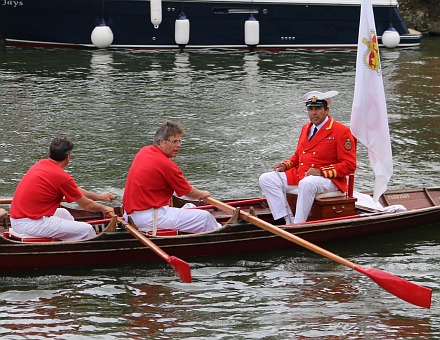 The flotilla of six traditional skiffs then rowed off back across the Marina to the Thames – they were rejoined by the three motor boats that give support and provide the occasional tow. 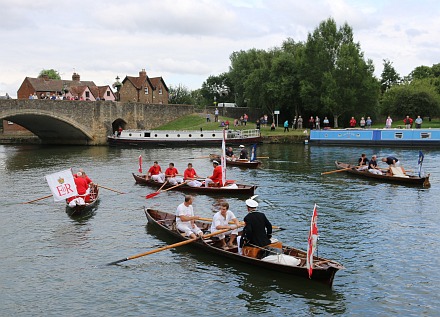 The end of the journey was at Abingdon Bridge where people had gathered. @TheAbingdonTaxi was there on the bridge – reporting directly on Twitter. He had already seen pictures, on Twitter, from @wbGabbleRatchet who was at the Marina. 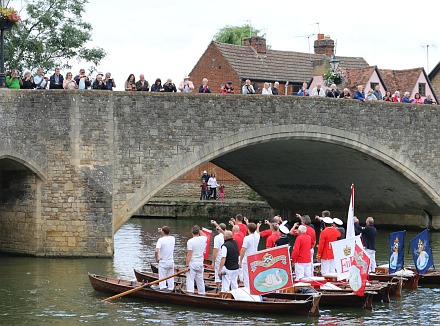 At Abingdon Bridge the skiffs came together and the company stood up to toast the Queen.

A minute or so later they disembarked, and David Barber was talking on his mobile phone. Then he gave another interview to a lady from the press. A lot of his job is education and public relations to help raise awareness and protect swans. I think he said to her 134 cygnets this year.

Finally, a pleasure cruiser came under the bridge – ‘Land of Hope and Glory’ blaring out. One of the passengers made as if they were conducting the assembled throng on the bridge.