The October 1st theme for the City Daily Photo is movement. You can see other bloggers’ posts here. I took a couple of pictures from in front of St Nicolas Church. The first shows the blur of a moving cyclist with the County Hall behind. 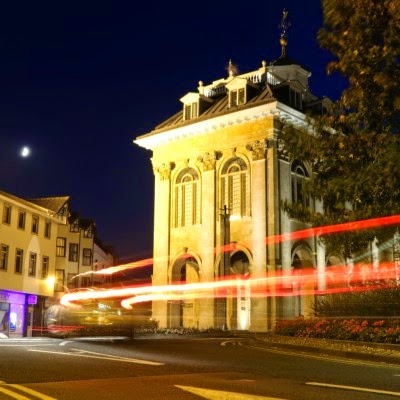 The second, taken a couple of hours later, shows the blur of a moving car with the County Hall behind.

Nikolaus Pevsner said of the building: “Of the free-standing town halls of England with open ground floors this is the grandest“.

There were over 30 adults (parents, grandparents, staff and parishioners) and 40 children in school on Saturday at St Edmunds School, Abingdon, to complete projects in the school grounds such as:

* Cleaning and planting pots with flowers and bulbs * Painting a mural in Foundation Stage

Theresa said “It was a fantastic day and lots of fun! We recycled a lot of material donated by parents which would otherwise have gone to landfill. We are planning on holding another Community Day next year.” Yesterday saw the 2014 Splash of Pink Day in Abingdon Town Centre – put on by Against Breast Cancer Charity who have offices in the Abingdon Science Park. As well as bringing The Abingdon Community Choir to the Market Place, wearing a number of shades of pink, a dozen or so shops decorated their windows in pink with pink balloons. The first Splash in Pink day in Abingdon was in 2009, and it has become part of the annual calendar. At 11:00 the Mayor of Abingdon, Councillor Angela Lawrence, together with the Oxfordshire Chief Fire Officer, Dave Etheridge, opened the day’s events. The Mayor then unveiled a plaque celebrating 50 years of The Abingdon Fire Station on Ock Street. At 12:00 there were Group photos. There were many present, former, and possibly future colleagues of the Fire Service in the pictures. At 13:00 there was Bun throwing from the top of the fire station tower. The people of Abingdon love a bun throw. Some buns had the number 50 inscribed. And at 15:00 the event was closed with a release of balloons. The winning balloon wins a holiday. Throughout the day there was the chance to take part in Fire Service activities, from climbing the ladder, as demonstrated in the picture by one of the firemen, to directing a fire hose, to going up in the hydraulic lift, and going in the fire engines.

There were also stalls, some very good cakes, and an exhibition about the Abingdon Fire Service from early years through to the present.